– Canadian police on Saturday used pepper spray and stun grenades in an attempt to restore normalcy in Ottawa, parts of which have been paralyzed by protesters opposing the government’s pandemic restrictions.

Here is a timeline of main events:

Nov. 19 – Prime Minister Justin Trudeau’s government announces that all cross-border truck drivers will be subject to mandatory vaccine and quarantine requirements from Jan. 15. The trucking industry association has warned the mandates could intensify supply-chain disruptions, but opposes protests on public roads.

Jan. 28 – A convoy largely consisting of trucks starts arriving in Ottawa from across Canada opposing the vaccine mandate. A similar requirement is in place in the United States.

Jan. 29 – Thousands of protesters under the banner “The Freedom Convoy 2022” hold a loud but peaceful protest in downtown Ottawa.

Jan. 31 – Trudeau, who was moved to a secret location, says Canadians are disgusted by the behavior of some protesters in Ottawa and says he will not be intimidated.

Feb. 2 – Leader of Canada’s main opposition Conservative Party, Erin O’Toole, is ousted after a caucus vote, partly because of his failure to embrace the anti-government protest quickly enough.

Feb. 7 – Police seize thousands of liters of fuel and remove an oil tanker supplying the trucks. A court grants an interim injunction preventing people from sounding horns in downtown Ottawa.

Feb. 7 – Protesters start blocking the Ambassador Bridge in Windsor, Ontario, the busiest crossing between Canada and the United States, and protesters block other border points in Alberta and Manitoba.

Feb. 10 – The Biden administration urges Canada to use federal powers to ease the disruption at the U.S.-Canada border.

Feb. 11 – A Canadian judge orders an end to the blockade of the Ambassador Bridge and the province of Ontario declares a state of emergency. Protesters defy the court order and remain.

Feb. 18 – Police begin push into crowds of demonstrators, arrest more than 100 and haul away vehicles. Key organizers are arrested.

(Compiled by Denny Thomas in Toronto; Editing by Matthew Lewis) 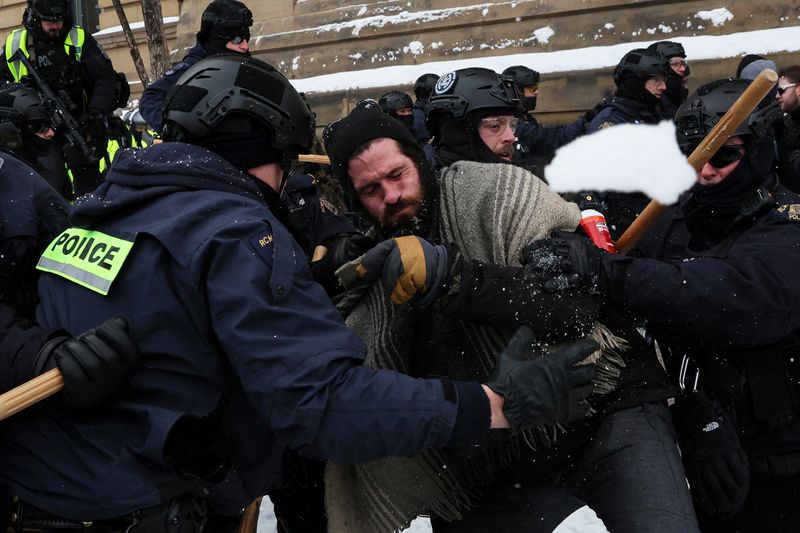