NEW ORLEANS – Mark Childress wrapped his black and gold sequin-studded robe tight against a cool night wind and surveyed the thousands of revelers gathering for the city’s first Carnival parade in two years.

Childress, 64, has seen many Mardi Gras celebrations, but none quite like this year, with people ready to pop with pent-up joy as pandemic restrictions melt away.

“It’s pretty intense for early on in the Carnival weekend,” Childress said Saturday night as the Krewe of Endymion crawled down a packed Canal Street on the edge of the French Quarter.

“A lot of tourists have already worn themselves out and they’re lying in the gutter on Bourbon Street, which is only supposed to happen around Wednesday.”

After last year’s false spring, when nascent hopes for emerging from the pandemic were dashed by the Delta and then Omicron variants of the coronavirus, many merrymakers on New Orleans’ streets said it felt like a stepping out party from the plague.

“We’re in a stronger place today as a nation with more tools to protect ourselves and our community from COVID-19,” the U.S. Centers for Disease Control and Prevention Director Rochelle Walensky said at a media briefing on Friday to announce an easing of pandemic restrictions.

In New Orleans, Mardi Gras celebrations have been building for days, with plastic beads in gold, green and purples lining parade routes, piling up at curbs like leaves in the fall. Families and neighbors staked out spots early each morning, putting out camping chairs, barbecue grills and propane burners topped with massive pots for crawfish boils.

On Bourbon Street, which one smells before seeing, tens of thousands thronged each night, creating a gauntlet of spilt beer amid a smoky marijuana haze, conversation impossible given the competing din from night club audio systems.

Brandon McDonald, a self-declared “30-something” visitor from Texas, had just shimmayed and sashayed his way through an impromptu block-long “Soul Train” dance line on Bourbon Street. Not a drop of his daiquiri was spilled as he hammed it up for the crowd, his feet moving to the rhythm of a one-man-band on the sidewalk tapping out a funky marching beat on snare and bass drums.

“The pandemic – the devil! – has tried to stop us, but the good Lord, he gonna make us all push through,” McDonald said. “I think we’re emerging from a darkness and I really feel like this is a new beginning. Of course, the drinks really help.”

The past two years have made it clear how important traditions like Carnival, graduation parties and even spring breaks are, said Dr. Steven Taylor, a psychiatry professor at the University of British Columbia and author of the 2019 book “The Psychology of Pandemics.”

“They are time markers, indicators of continuity,” he said. “They show us that life keeps going on, that life is stable because we have these rituals like Mardi Gras.”

The revelry in New Orleans is a show of human resilience and deep desire for connection, Taylor said. “A lot of people are desperate to be caught up in something that is bigger than themselves and is positive for a change.”

That’s exactly what Ashley White, 31, from Baton Rouge, was doing as she jumped up and down on St. Charles Avenue on Sunday, waving and yelling at the “queen” of the Mid City Krewe parade as it slowly rolled before tens of thousands of fans on Sunday.

This Carnival felt similar to the one in 2006, six months after Hurricane Katrina devastated the city, White said. “Like then, we’re coming out of something so dark and so damaging, but we’re having this revival.”


Colby Reddin, 31, of Fort Collins, Colorado, was all decked up for his first Mardi Gras, wearing a vest of the traditional yellow, green and purple with oversized beads draped around his neck.

As the Krewe of Okeanos parade went by, he held up a bullseye poster challenging marchers to hit it with the beads and other trinkets tossed out at Carnival parades. Reddin said he was struck by how much he had missed something he saw in abundance on the streets of New Orleans: hugging.

“We haven’t been hugging each other in like two years now,” he said. “It’s all about that human connection, making connections between different cultures, different people coming together and having a great time.” 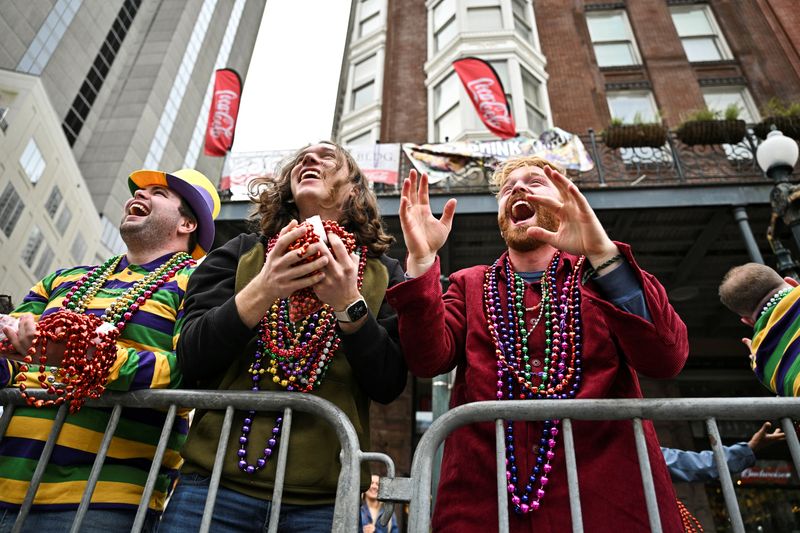 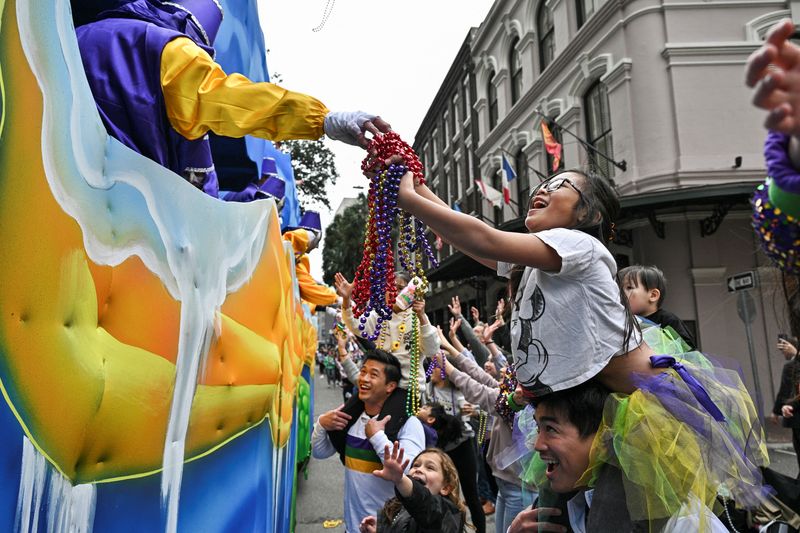 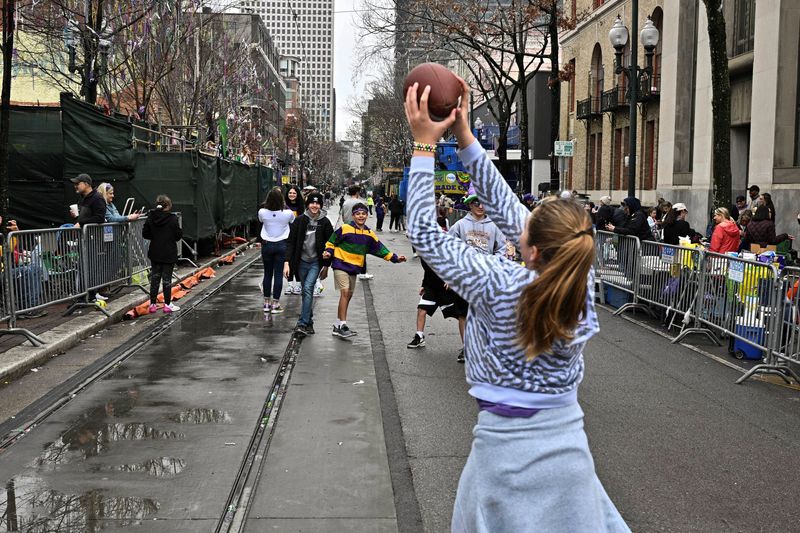 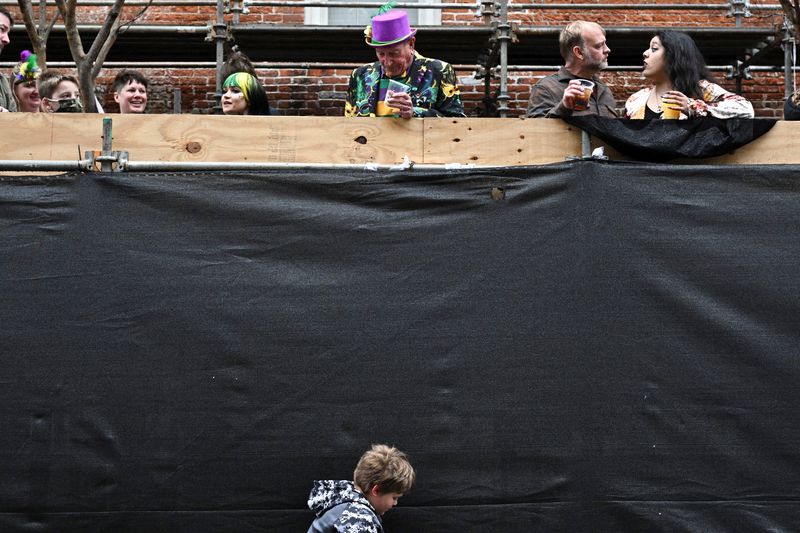 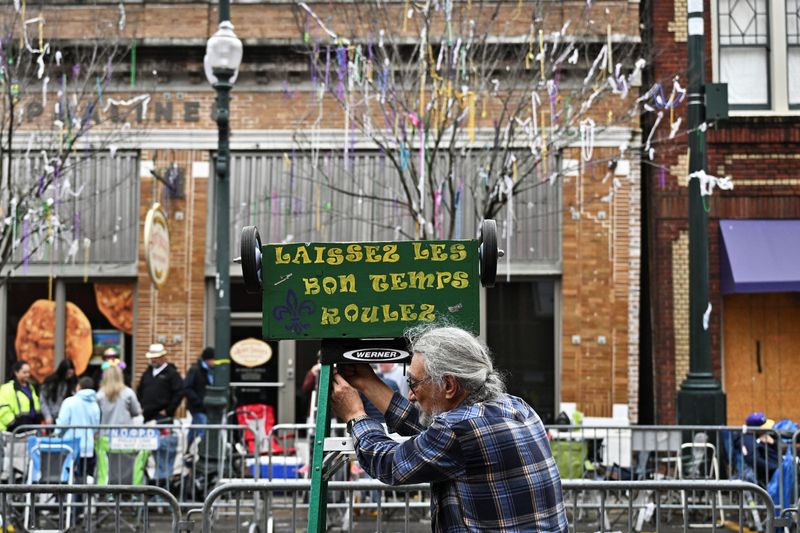 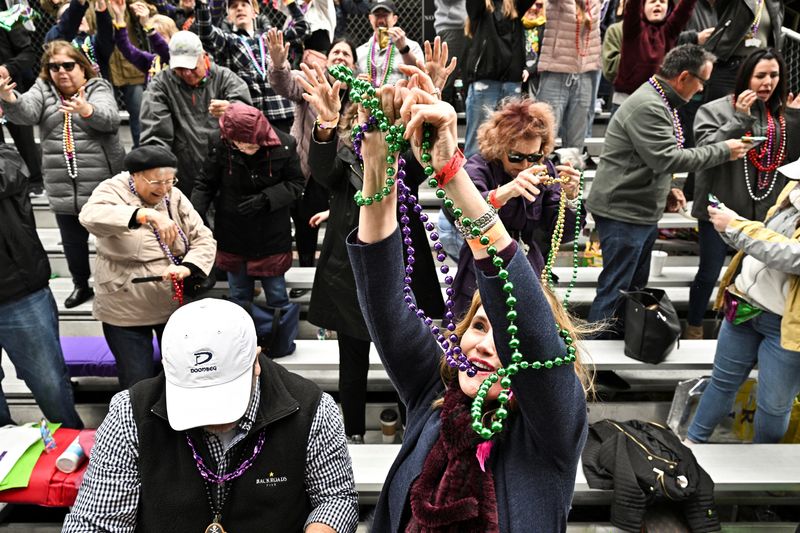