The country has been battling a record COVID-19 wave driven by the highly infectious Omicron variant even as it largely scrapped its once aggressive tracing and quarantine efforts and eased social distancing curbs.

The country’s infection and death rates are still far below those recorded elsewhere, as almost 87% of its 52 million residents are fully vaccinated and 63% have received booster shots.

But the death toll nearly doubled in just about six weeks, with daily fatalities peaking at 429 last Friday, fuelling demand for funeral arrangements.

The health ministry on Monday instructed the 60 crematories nationwide to operate for longer hours to burn up to seven bodies from five, and the 1,136 funeral parlours capable of storing some 8,700 bodies to expand their facilities.

Authorities have already boosted the combined daily cremation capacity from about 1,000 to 1,400 per day starting last week. But a large backlog of bodies and a long wait continued to be reported in the densely populated greater Seoul area, Son said.

Health ministry data showed that the 28 crematories in Seoul city were operating at 114.2% capacity as of Monday, while the ratio stood at about 83% in other regions such as Sejong and Jeju.

Crematories will be temporarily allowed to receive reservations from outside their regions, which is currently banned by some local governments, to ease the pileup, Son said.

The number of critically ill patients has been hovering above 1,000 over the past two weeks, but it could go up to 2,000 in early April, another health ministry official Park Hyang said. Around 64.4% of the intensive care unit beds are occupied as of Wednesday, compared with some 59% two weeks earlier.

As part of efforts to curb severe cases and deaths, South Korea’s drug safety agency granted emergency approval for the use of Merck & Co Inc’s COVID-19 treatment pill for adults.

The molnupiravir tablet, branded as Lagevrio, is the second oral antiviral to be authorised in South Korea after Pfizer Inc’s Paxlovid.

Lagevrio will only be allowed for patients who are aged 18 or older and not pregnant and cannot be treated with injection medications or the highly effective Paxlovid, the drug safety agency said.

The health ministry said the first shipment of Lagevrio pills for 20,000 people is expected to arrive on Thursday.

“The medical system is under substantial pressure, though it is still operated within a manageable range,” Park told a briefing on Wednesday.

“We would focus more on high risk groups going forward, and make constant checks to ensure that there is no blind spot.” 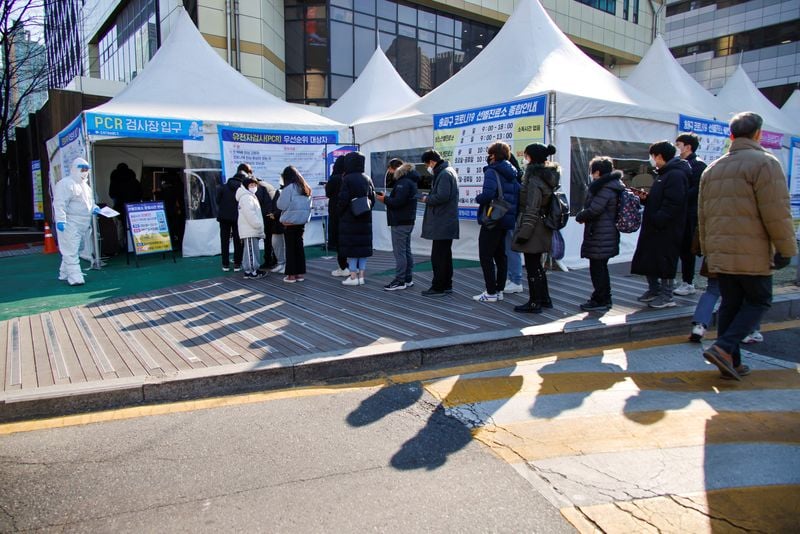