BUDAPEST – A $5.35 billion spending spree by Hungary’s Prime Minister Viktor Orban ahead of an election next week has left a budget hole that may spell trouble for whoever wins, as the conflict in Ukraine adds to pressure on the public finances.

With polls projecting the tightest race since his 2010 landslide, Orban has dished out 1.8 trillion forints worth of tax rebates, tax cuts, pension and wage hikes to support his bid for a fourth successive term.

That helped push the deficit to 1.585 trillion forints in February, half the 2022 target, and with the war already dragging on growth, some economists say the government’s fiscal plans look obsolete.

“Room for manoeuvre has diminished as the budget was spending through the nose at the start of the year,” ING economist Peter Virovacz said. “Whoever forms a government, the main priority must be to somehow get the budget into shape.”

Finance Minister Mihaly Varga has already raised the prospect of a budget overhaul after the April 3 vote.

While some economists say the European Union could turn a blind eye to high budget deficits within the bloc given the extraordinary circumstances, a risk for Hungary is how credit rating agencies would respond to a rise in the deficit.


“The sharply higher inflation now evident and near-certainty of lower growth in 2022 will likely be a net negative for the budget. There is hence a reasonable likelihood of the targeted budget deficit being missed,” said Arvind Ramakrishnan, a director in Fitch Ratings’ sovereign team.

With Hungary’s public debt ratio having surged to the highest in Central Europe, based on Eurostat data, during the pandemic, any further rise would be negative for its ratings.

“Any potential impact of current developments on the credit rating will depend in part on the government’s fiscal response and impact on headline debt, as well as the extent of adherence to domestic and EU fiscal rules from 2023,” Ramakrishnan said.

In a note before Russia sent troops into Ukraine on Feb. 24, Standard & Poor’s said its stable outlook on Hungary’s credit rating reflected the expectation that growth would remain solid, supported by EU funds, some of which are currently on hold.

“We could lower the ratings should fiscal deficits remain elevated, leading to rising debt to GDP, or if Hungary’s external position weakens beyond our current expectations,” S&P said.

Central Europe has been hit hard by the war in its neighbour, with plunging currency and stock markets adding to obstacles such as snarled supply chains and labour shortages.

Hungary’s is among central banks forced into big rate hikes. Raising its base rate by 100 basis points on Tuesday, it estimated additional spending because of the Ukraine crisis at 0.6% of GDP so far, which could rise to 1.6% of GDP if the conflict becomes entrenched.


“If we called COVID-19 a major shock, which required unprecedented economic policy measures to handle, then this applies exponentially with regard to the war,” said economist Zoltan Torok at Raiffeisen.

A regulatory price freeze to limit household utility bills, in place since 2015, could cost up to 1 trillion forints this year, some analysts say, and may become unsustainable.

“Barring a significant retreat in gas prices, that will mean an expenditure worth nearly 2% of GDP, plus there is the added fiscal risk of economic growth falling short of the baseline scenario,” said one economist who did not want to be named.

They project a deficit of nearly 7% this year, although surging inflation could soften the blow via tax revenues.

After padding with budget with 500 billion forints in dividends during the pandemic, the central bank is now making losses on its cheap financing for companies as rates rise.

That and higher debt servicing costs could tear another 1 trillion forint hole compared with 2019 levels, Governor Gyorgy Matolcsy wrote in a January op-ed, saying the government will have to find new sources of revenue.

But with Orban promising to continue supporting middle-class families and pensioners, some analysts have flagged the risk of a return to the unorthodox fiscal stabilisation measures seen after 2010.

“The return of similar measures, sectoral taxes, and the like, cannot be ruled out, regardless of who wins the election,” Raiffeisen’s Torok said. 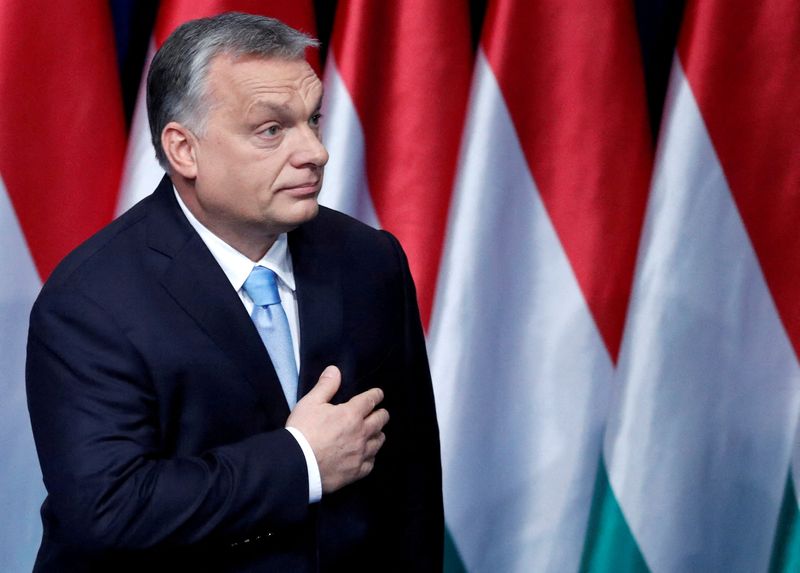