TORONTO – As Canada’s inflation outlook worsens, investors are betting the country’s central bank will begin hiking its key interest rate in half-percentage-point increments, with the first of the rarely used upsized moves possibly coming as soon as next month.

Money markets expect the Bank of Canada to raise interest rates by between 200 and 225 basis points in the six remaining interest rate announcements in 2022, up from about 140 basis points before a blockbuster employment report this month.

That bet implies that up to three of those meetings could result in hikes greater than the quarter-percentage-point increments usually favored by the central bank. The last time it pushed through a half-percentage-point hike was in May 2000.

Canada’s economy could be particularly sensitive to a faster pace of interest rate hikes after households ramped up borrowing to record levels during the COVID-19 pandemic to participate in a red-hot housing market.

“The Bank of Canada needs to aggressively tighten policy to keep inflation expectations for the consumer and also for businesses well anchored,” said Simon Harvey, head of FX analysis for Monex Europe and Monex Canada.

“It’s a case of do it now because later it will come at a greater cost to economic growth.”

The central bank hiked borrowing costs earlier this month for the first time since October 2018, lifting its policy rate to 0.50%.

Chances of a larger-sized move on April 13, when the central bank will make its next interest rate announcement, have climbed to 70% after BoC Deputy Governor Sharon Kozicki said on Friday that the pace and magnitude of interest rate increases would be actively discussed at that meeting.

The Federal Reserve is also expected to hike its benchmark overnight interest rate by 50 basis points at its May 3-4 policy meeting.

The rush to price in more aggressive tightening comes as a commodities rally sparked by Russia’s invasion of Ukraine threatens to push Canadian inflation higher for longer. It touched a 30-year high of 5.7% in February.

The historic link between the Canadian dollar and oil prices has weakened so that the BoC can no longer rely on a stronger currency to ease inflation pressures brought on by higher energy costs, while Canadian Prime Minister Justin Trudeau’s surprise political deal with the smaller left-leaning New Democrats could lead to an increase in spending that further fuels inflation.

“Markets expect the Bank of Canada to overshoot its own neutral rate estimate as it attempts to bring inflation under control,” said Karl Schamotta, chief market strategist at Corpay.

The neutral rate is the level that is expected to be in place when the economy is at full strength and inflation is on target. So it’s a signpost of sorts for where interest rates could go.

The BoC is due to refresh its estimate of the neutral rate in the monetary policy report that accompanies next month’s rate decision. With productivity growth weakening, economists doubt that the central bank will raise its estimate from the current level of 2.25%, but it could link it to a hawkish signal.

Rather than adjust its neutral estimate, the BoC “may guide a possible need” for the end-point in rates to exceed it, said Derek Holt, vice president of capital markets economics at Scotiabank.

Investors see the BoC’s policy rate peaking at about 3% next year. 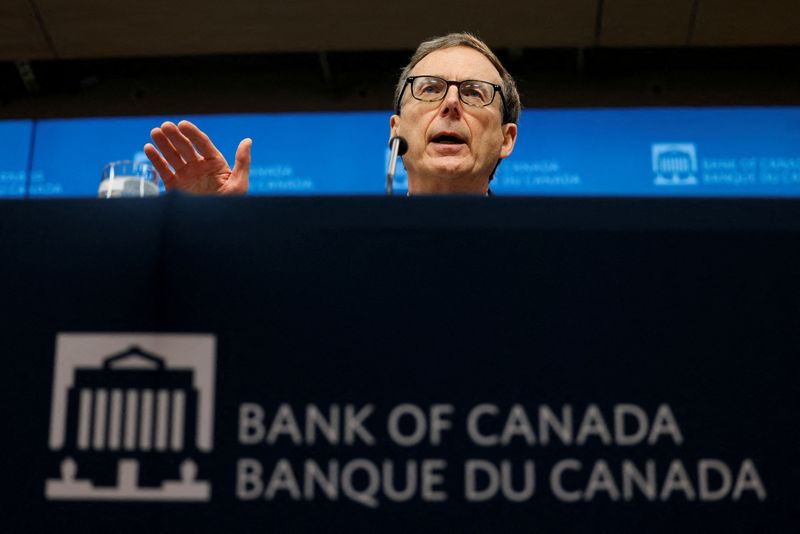