LONDON (Reuters) – Commodity traders have started diverting sugar shipments away from Russia, according to industry sources and shipping data, a move set to further boost soaring domestic prices and ratchet up pressure on the Russian government to cool food inflation.

Russia needed sugar imports this year after two successive shortfalls in the beet crop, and disruption to shipments will result in shortfalls as the country battles panic buying of sugar and other staples, industry experts said.

Sugar is widely used in Russia, including for fruit preservation and making vodka.

Many Russians have been stocking up on the sweetener and other staples after unprecedented Western sanctions imposed on Moscow following its Feb. 24 invasion of Ukraine battered the rouble and sent food prices soaring.

But industry data points to tightness given Russia’s last two sugar harvests came in below the required 6 million tonnes. This tightness will only will be exacerbated, experts say, if sugar shipments to Russia remain constrained.

“Its difficult,” said an executive at one of the world’s largest soft commodity trade houses. He said that even if a client uses a non-sanctioned Russian bank, rouble depreciation has made trade prohibitively expensive, with insurers ratcheting up premiums for ships going into the Black Sea.

The sources did not give further details, but industry data show a ship called Osiris, chartered by Sucden with 43,000 tonnes of Brazilian raw sugar originally destined for Russia, is currently heading for Vatika Bay, Greece.

Another ship called the Argyroula, chartered by Sucden with 33,000 tonnes of Mexican raw sugar originally destined for Russia, is now heading for Riga, Latvia.

Trader Louis Dreyfus Company told Reuters its vessel Pu Lan Hai, which left Brazil in late February with 45,000 tonnes of raw sugar destined for Russia, will now leave part of the cargo in Egypt and the rest in Georgia.

In a bid to ease sugar price inflation before the war, Russian authorities set a duty-free 2022 quota for 300,000 tonnes of white and raw sugar imports. They have since banned sugar exports until Aug. 31.

The measures have yet to bear fruit. Official data https://rosstat.gov.ru/storage/mediabank/54_30-03-2022.htm shows the consumer price index for sugar in Russia soared 46% between Jan. 1 and March 25.

Russia has so far received 44,000 tonnes of raw sugar imports as part of the quota set earlier this year.

Traders say the country has just a few months to ship in the rest of the quota because its mills will be required to process Russia’s own beet crop after that.

“Some volumes will continue going to Russia, people will find ways, but I don’t think business will continue as usual,” said a source at one of the world’s largest sugar trade houses.

According to trader Czarnikow’s head of analysis Stephen Geldart, Russian sugar stocks are at critically low levels and the country risks localised shortages without imports.

It launched an investigation last month into sugar producer Prodimex, accusing it of illegally “coordinating the economic activity” of retailers that led to a surge in prices.

FAS earlier this year agreed with sugar producers to keep factory gate prices no higher than 47 roubles ($0.5378) a kilogram, said Geldart, but the agreement has seemingly failed to alleviate sugar price inflation. 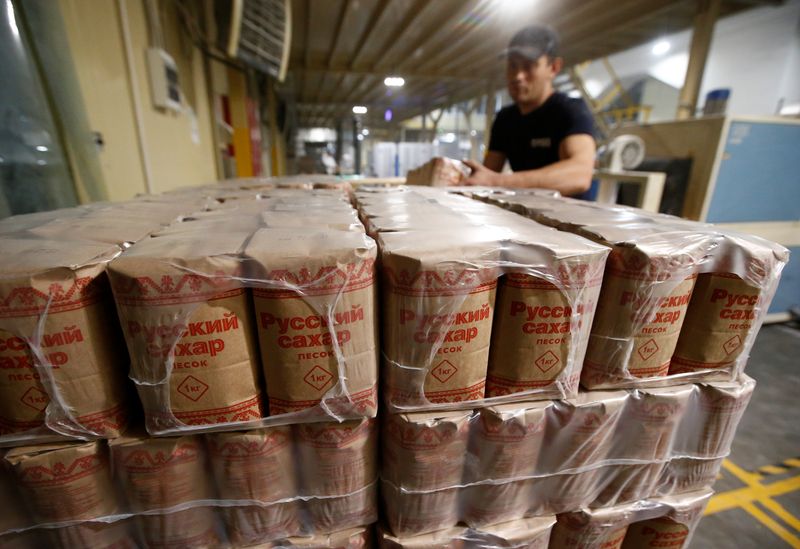