By Mimosa Spencer and Layli Foroudi

As vote counting continued, President Emmanuel Macron was ahead of far-right party leader Marine Le Pen and polling firms estimated that far-left leader Jean-Luc Melenchon would win over 22% of the vote, compared to under 20% five years ago.

In a hall at the edge of Paris, a few hundred Rassemblement National supporters erupted into cheers as TV stations announced Le Pen had again made it into the second round, and with a higher score than the 21.3% in 2017.

They waved French flags and shouted “Marine for president” as Le Pen spoke to her supporters and called on voters for conservative Valerie Pecresse and rival hard-right candidate Eric Zemmour to rally behind her.

Several militants said their party was no longer ostracised by the general public and that they had generally received a warm welcome when canvassing for Le Pen.

“We are greeted in a completely different manner when we distribute party leaflets, we see it when we go to markets, we see people who are much more receptive – something has changed,” longtime Le Pen supporter Nathalie Vaccari, 57, said.

With crowds jumping on stage and singing “on a gagne” (we have won), Le Pen’s deputy campaign manager Jean-Philippe Tanguy said he was confident Le Pen could win over voters who have voted for Zemmour and Melenchon in the first round.

At a packed Cirque d’Hiver theatre in central Paris, some Melenchon fans burst into tears when the first results were announced and hundreds of supporters sang for joy, chanting “on ne lache rien” (we won’t give an inch) throughout the night.

Actor Xavier Mathieu, who led the singing, said he regretted that Melenchon had not qualified for the second round, but was happy about his candidate’s strong showing.

“The race is not finished because change in society does not happen in elections, it happens in the street,” he said.

“They preferred to divide the left,” he said.

Polling firms forecast Jadot at under 5% of the first-round vote, while Hidalgo was seen getting under 2%, a record low for the party that helped Francois Hollande win the 2012 election.

At the conservative party’s venue, supporters had the blues, with Valerie Pecresse seen scoring less than 5%, compared to the 20.01% her predecessor Francois Fillon won five years ago.

Some 200 activists lingered after Precresse left, finishing the champagne, eating canapés, and pondering the outlook for their party, which dominated French politics for decades.

Kinata Kopi, wearing a T-shirt saying “Valerie je t’aime”, said Republicans now had to stick together to prepare the 2027 election.

“I hope General de Gaulle and (former president) Jacques Chirac will inspire us so that the Republicans’s flame remains alight,” she said. 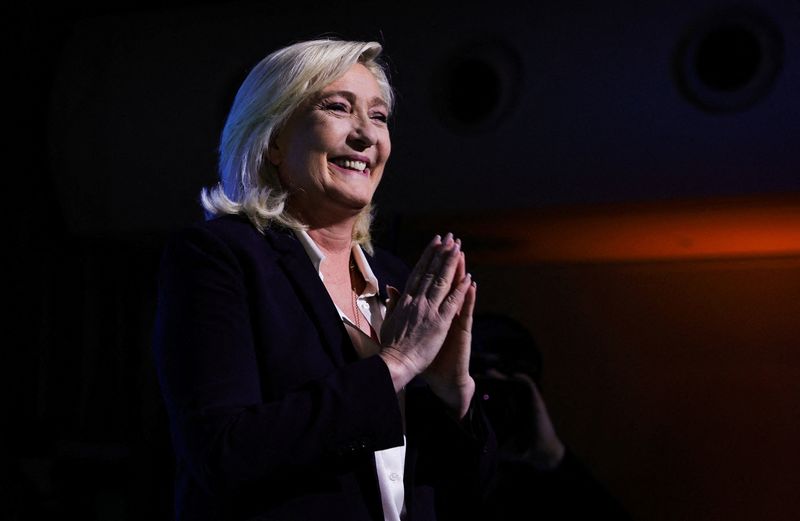