SEOUL – China remains committed to playing a constructive role in resolving the North Korea nuclear issue, Beijing’s Korean affairs envoy said on Tuesday, a week after the North vowed to develop its nuclear forces “at the fastest possible speed”.

Liu Xiaoming, Special Representative of the Chinese Government on Korean Peninsula Affairs, made the remark during a meeting with his South Korean counterpart, Noh Kyu-duk, in Seoul, according to South Korea’s foreign ministry.

Noh expressed concerns over the North’s recent missile tests and activities to restore its Punggye-ri nuclear test site, and asked Beijing to play a role to bring Pyongyang back to dialogue, the ministry said.

“The two sides agreed to continue close strategic communication between South Korea and China over Korean peninsula issues,” the ministry said in a press release.

Pyongyang has recently stepped up weapons tests, resuming its intercontinental ballistic missile (ICBM) tests for the first time since 2017 in March. Officials in Seoul and Washington say it may also be preparing for a new round of nuclear tests.

Liu said on Sunday Beijing was concerned about the tense situation on the Korean peninsula, but added the key to resolving the issue is in the hands of North Korea and the United States.

Liu’s Seoul trip, his first since taking office in April 2021, comes days before South Korea’s newly elected President Yoon Suk-yeol takes office on May 10, with U.S. President Joe Biden set to visit Seoul for talks with Yoon on May 21.

The United States has pushed for more United Nations sanctions on the North. But China and Russia have signalled opposition, arguing sanctions should be eased to jumpstart talks and provide humanitarian relief to the impoverished North. 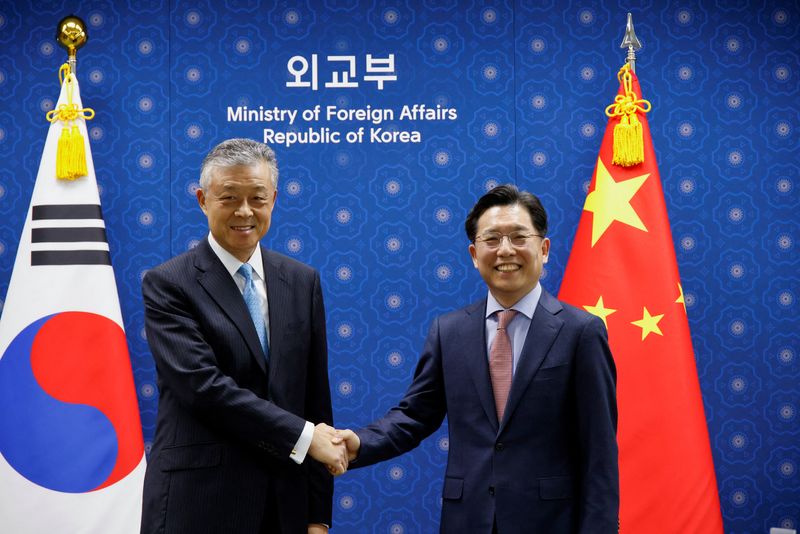