By Alasdair Pal and Uditha Jayasinghe

COLOMBO (Reuters) – On Monday morning, hundreds of supporters gathered at the prime minister’s official residence in Sri Lanka’s commercial capital of Colombo where they urged Mahinda Rajapaksa not to resign.

Arguably the country’s most powerful man, and scion of the dynasty to which his younger brother, President Gotabaya Rajapaksa, also belongs, was contemplating the move to pave the way for an interim government amid economic and social turmoil.

Less than an hour later, some of the same crowd rampaged through the city wielding iron bars and beating anti-government protesters, according to Reuters witnesses, sparking the deadliest day of violence in months of demonstrations.

If the meeting, organised by the Rajapaksas’ ruling Sri Lanka Podujana Peramuna (SLPP), was supposed to shore up Mahinda’s position, it backfired spectacularly.

His supporters’ actions enraged those calling for his ouster and contributed to clashes across the country as well as widespread attacks on property owned by the Rajapaksas and their political allies.

Eight people died and hundreds were injured. The prime minister stepped down later in the day and on Tuesday his brother imposed sweeping powers that allowed police to shoot anyone attacking property or threatening lives.

Several Rajapaksa properties were vandalised and a museum dedicated to Mahinda’s father was destroyed – an extraordinary reversal for a family that dominated Sri Lankan politics for decades and is respected and feared in equal measure by much of the country.

“This is a turning point,” said Jayadeva Uyangoda, a political scientist at Colombo University, referring to the meeting attended by about 1,000 people and subsequent events.

“It has shifted the public mood in the direction of open anger towards the Rajapaksas and their supporters. It is very clear it was a colossal political blunder by Mahinda Rajapaksa.”

On Monday morning, hundreds of SLPP loyalists were bused into central Colombo, according to a government official at the time. They rallied outside Temple Trees, a colonial-era mansion used as the prime minister’s official residence.

“Whose power? Mahinda’s power!” they chanted, before the iron gates of the compound swung open to allow them inside at around 11 a.m., Reuters witnesses said.

Inside, Rajapaksa addressed the crowd in a hall usually used for state functions.

“It is not a secret that the opposition is taking forward their own political agenda under the guise of the financial crisis. They only want power,” he said, according to a transcript of his remarks released by his office.

The 76-year-old asked the crowd whether he should resign, and they shouted back that he should stay on.

Other speakers at the meeting, including Johnston Fernando, the government’s chief whip, were more forthright.


“Get ready,” Fernando said, according to a video seen by Reuters and confirmed as genuine by the official who witnessed the speech.

“Let’s start the fight. If the president can’t … he should hand over to us. We will clear Galle Face,” he said, referring to the waterfront area of Colombo where two protest sites have been set up in recent weeks. The crowd cheered.

Breaking News
SCHOEN: Republicans Smell Blood In The Water As Democrats Scramble To Find A Life Raft Ahead Of November

Fernando and Mahinda Rajapaksa did not respond to requests for comment on the meeting and whether it triggered the subsequent clashes.

“The meeting at Temple Trees … was organised with the intention of showing support to the government,” Namal Rajapaksa, Mahinda’s son and a ruling party lawmaker, said in a statement posted on social media.

“It was not organised with violent intentions, instead was hijacked by mobs with vested interests! Most of the violence is directed toward the SLPP supporters.”

At around midday, Rajapaksa’s supporters began leaving the compound. Some proceeded to a small protest camp outside Temple Trees, where they began smashing and burning tents and beating those sitting there, according to Reuters witnesses.

From there, they headed north along Galle Face to the main protest site, known as Gota Go Gama. Some were carrying iron bars. There they clashed with anti-government protesters, some of whom began using tent poles as weapons.

Riot police eventually moved in to break up the skirmishes using tear gas and water cannon.


Within hours, Rajapaksa had gone back on his promise to supporters and resigned. He said he did so to allow the formation of a unity government.

Thousands of people defied a nationwide curfew to celebrate in the streets, but the mood quickly soured.

Across the country, anti-government demonstrators attacked lawmakers and police and torched properties belonging to both Rajapaksa and Fernando.

Although the violence has subsided, hundreds of people again gathered at Gota Go Gama late on Tuesday despite the curfew.

“There is a curfew but still people are supporting us,” said Lahiru Fernando, a 36-year-old TV production worker who has been camped at the site for over a month.

“Now the whole island is supporting us. They kicked the wrong generation.”

(Reporting by Alasdair Pal and Uditha Jayasinghe in Colombo; Editing by Mike Collett-White and Nick Macfie) 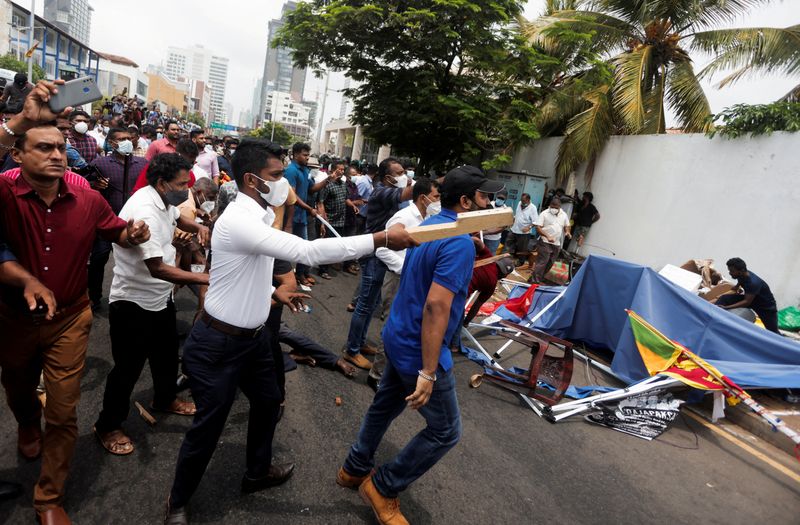 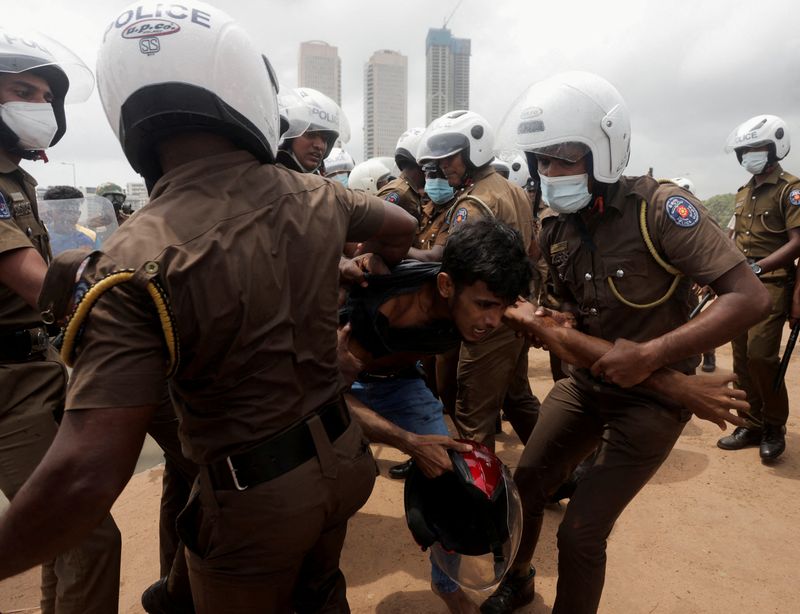 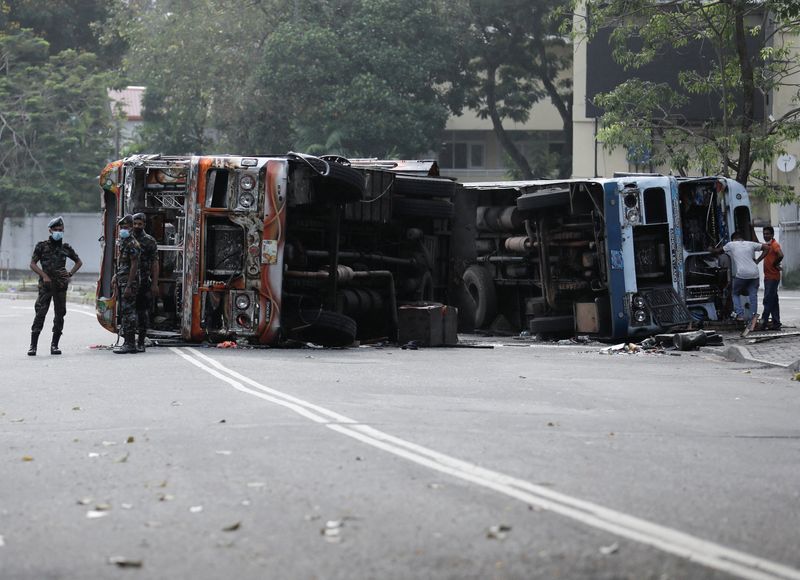 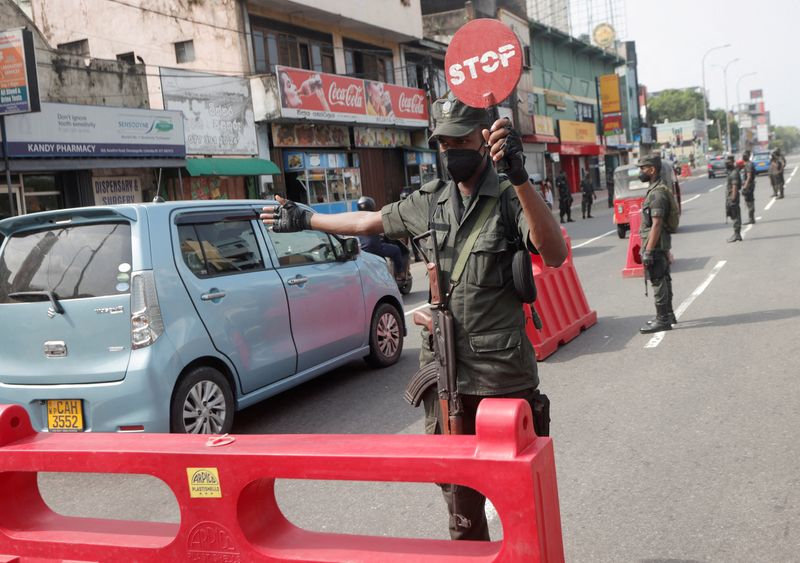