By Liangping Gao and Clare Jim

Property sales by value in April slumped 46.6% from a year earlier, the biggest drop since August 2006, and sharply widening from the 26.17% fall in March, according to Reuters calculations based on data from the National Bureau of Statistics (NBS) released on Monday.

Property sales in January-April by value fell 29.5% year-on-year, compared with a 22.7% decline in the first three months.

A further cut in mortgage loan interest rates for some home buyers announced by Chinese authorities on Sunday did little to convince investors and analysts that it could revive sluggish property demand.

The sector, a major economic growth driver, has been in a severe slump since last year after the authorities clamped down on excessive borrowing by developers, spooking many would-be home buyers who feared projects would not be completed.

More than 80 cities have taken steps to boost demand since the beginning of the year, including subsidies, reductions in mortgage rates and smaller down payments.

However, the property outlook has remained bleak amid protracted COVID-19 curbs in dozens of cities, including Shanghai, currently in its seventh week of lockdown.

“Although we expect this cut to provide a benefit, the positive impact could be quite limited, as stringent anti-COVID measures appear set to continue for an unspecified time,” Lu said in a note on Monday.

He added that uncertainty, a lack of confidence, an increase in the unemployment rate and falling income growth have all contributed to the slump in new home sales.

Hong Kong’s Hang Seng mainland properties index rose 1.2% in late morning trade, narrowing from a 3.35% gain at the opening. The broader market was down 0.2%.

Nationwide property investment by developers fell 2.7% from a year earlier in January-April, after a 0.7% gain in the first three months of the year.

In April, property investment fell 10.1% year-on-year, the fastest pace since December, compared with the 2.4% decline in March.

New construction starts fell 26.3% in January-April from a year earlier, after a 17.5% decline in the first quarter of the year.

Property developers, hoping for the market to bottom out in the second quarter, are revising down investor expectations for full-year sales after a 50% plunge in the first four months.

“Sales recovery is key for liquidity, without which policy effects will be discounted,” Citi said in a report. “More ‘real’ measures before a permanent loss on demand is needed for a faster recovery.”

Japanese construction equipment maker Komatsu reported a 16.6% fall in the use of its machines in China in April, extending a 17.3% decline in March. 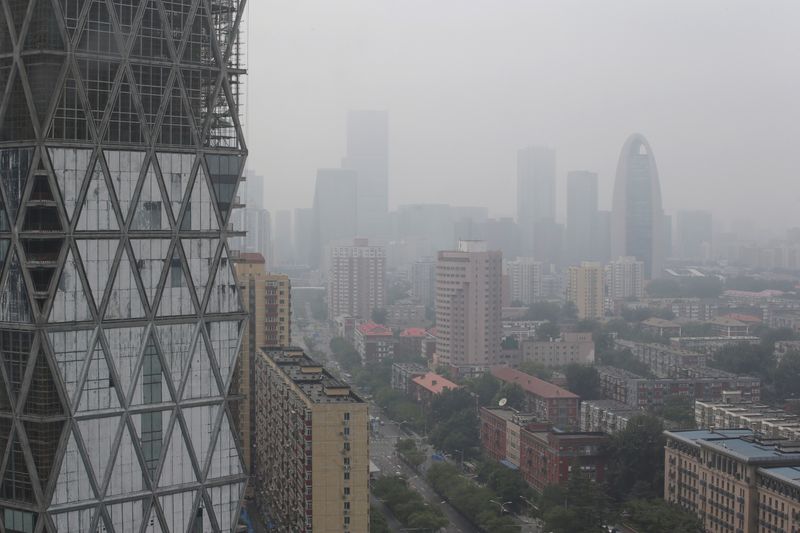