(Reuters) – A sharp slowdown in China’s economy caused by its strict zero-COVID rules and Beijing’s shift away from a traditional reliance on external demand have cast doubts over how much the country will contribute to future global trade and investment.

While China staged a remarkably quick recovery from its initial pandemic slump, thanks to bumper exports and factory production, analysts expect the current downturn will be harder to shake off than the one seen in early 2020.

The gloomier outlook presents challenges not only for leaders in Beijing worried about rising unemployment, but foreign businesses counting on China to resume its level of engagement it had with the rest of the world before the pandemic.

Calculations based on International Monetary Fund projections show China’s expected average annual contribution to global economic growth through to 2027 at about 29%. While that’s a considerable addition, it contrasts with the years following the 2008 global financial crisis when that averaged closer to 40%.

ANZ’s chief economist for Greater China, Raymond Yeung, said Beijing’s economic policies have more recently shifted to home-grown solutions and reforms, rather than the resumption of its past model that focused on greater engagement with the world.

“Successful implementation of these may pave the way to sustainable growth over the long term,” Yeung wrote in a note. “However, the risk of failing to achieve a similar growth rate is higher. If MNCs (multinationals) begin to withdraw their onshore presence, the process of economic convergence may come to an end sooner than anticipated.”

China’s export growth slowed to single digits in April, the weakest since the onset of the pandemic, while imports barely changed as COVID-19 curbs halted factory production and slashed demand.

Authorities are expected to tread a careful policy path around COVID ahead of a key Communist Party meeting towards the end of the year.

In a sign of that caution, China last week gave up hosting rights for the Asian Cup football finals next year due to COVID concerns.

Peiqian Liu, China economist at NatWest Markets in Singapore, said faced with a choice, Beijing would likely prioritise maintaining wins in hard-fought battles against COVID and rampant debt over its 2022 growth target of 5.5%, which many analysts consider ambitious.

“Broadly speaking, there has been a long-term shift starting as early as 2018 to a more domestic-driven economy, boosting the services sector and upgrading the manufacturing supply chain, (and) steering away from debt-addicted stimulus and growth,” Liu said.

A broad and sustained slowdown in investment would weigh on demand, contributing to a deeper slowdown in global growth, she said.

Beijing has defended its policies and downplayed the global ripple effects. An opinion piece in state-owned Global Times last week said zero-COVID was the most suitable strategy to fight the virus and keep the economy stable and expected a continued strong contribution to global growth.

Others broadly agree — Fitch Ratings chief economist Brian Coulton acknowledged the disruptions from zero-COVID but did not see it being a more serious drag on global growth.

“If anything the reliance of the rest of the world on Chinese production has increased in the last couple of years so I don’t see any waning of the influence of China on the global cycle in the near-term anyway,” Coulton told Reuters.

For now, however, foreign businesses in China are becoming vocal about worsening operating conditions.

Under the zero-COVID policy, Chinese citizens enjoyed a long period of relative openness and freedom within the confines of the domestic economy, but remained tightly shut off from the rest of the world.

However, more recent domestic outbreaks mean authorities have not only locked down large parts of the manufacturing sector, adding to global supply shocks, but also doubled down on curbs restricting the movement of people in and out of the country.

While travel curbs in much of the rest of the world are easing as countries try to “live with COVID”, China said last week it would strictly limit unnecessary foreign travel by its citizens, continuing an effective freeze that has been in place for the past two years.

The American Chamber of Commerce in China warned on Tuesday that strict COVID-19 controls would hamper foreign investment into the country for years to come as limits on travel block the pipeline for projects.

A survey from Germany’s Chambers of Industry and Commerce (DIHK) last week showed 47% of German companies in China were critically rethinking their activities there and one in eight companies were even considering leaving the country.

“It usually takes years to establish oneself here and given the size of the country, a relocation is all the more difficult, the more astonishing the survey result is,” said Volker Treier, head of foreign trade with the German chambers. 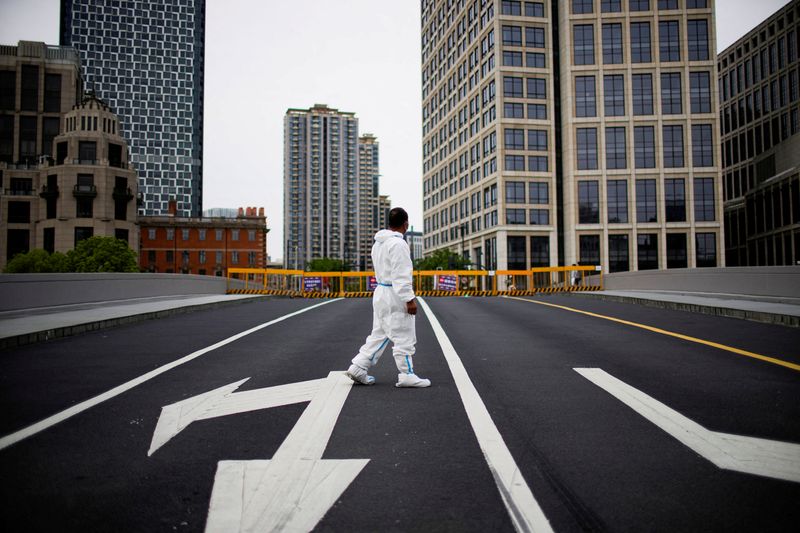