WASHINGTON -U.S. President Joe Biden said on Tuesday he planned to meet with lawmakers in Congress about guns after the Texas elementary school shooting last week in which 19 children and two teachers were killed.

“There’s an awful lot of suffering,” Biden said during a meeting with New Zealand Prime Minister Jacinda Ardern in the Oval Office.

Biden, who visited with families of the shooting victims in Uvalde, Texas, on Sunday, said he thought he had been to more mass shooting aftermaths than any other U.S. president.

“Much of it is preventable, and the devastation … is amazing,” he said. “I will meet with the Congress on guns. I promise you,” he said to reporters as he exited the room.

Ardern expressed condolences for victims of the shootings in Texas and a May 14 racist shooting in Buffalo that killed 10 people.

“It’s been devastating to see the impact on those communities,” she said. Ardern said she would be glad to share anything about New Zealand’s experience dealing with guns if it could be valuable. Biden called what the country was doing with technology companies “important.”

After a 2019 massacre in Christchurch, New Zealand, in which a lone gunman killed 51 Muslims, Ardern delivered a ban on semiautomatic firearms and other gun curbs, a stark contrast to the United States, where lawmakers and activists have struggled to address gun violence despite numerous mass shootings.

In the United States, U.S. lawmakers have repeatedly failed to tighten gun laws after similar massacres over the past decade.

Biden’s fellow Democrats are open to new gun restrictions while Republicans have an expansive vision of gun rights.

U.S. lawmakers from both parties are working on potential legislative action, despite previous attempts having failed. The White House said on Tuesday that Biden did not support a ban on all handguns and reiterated that it is studying potential executive actions on gun violence protection.

The White House is urging Congress to act on the issue and Biden has, for the moment, sought to give lawmakers space to find compromises that could pass.

Texas Governor Greg Abbott, a Republican, has repeatedly said in the wake of the Uvalde school shooting last week that gun regulations are not the solution. 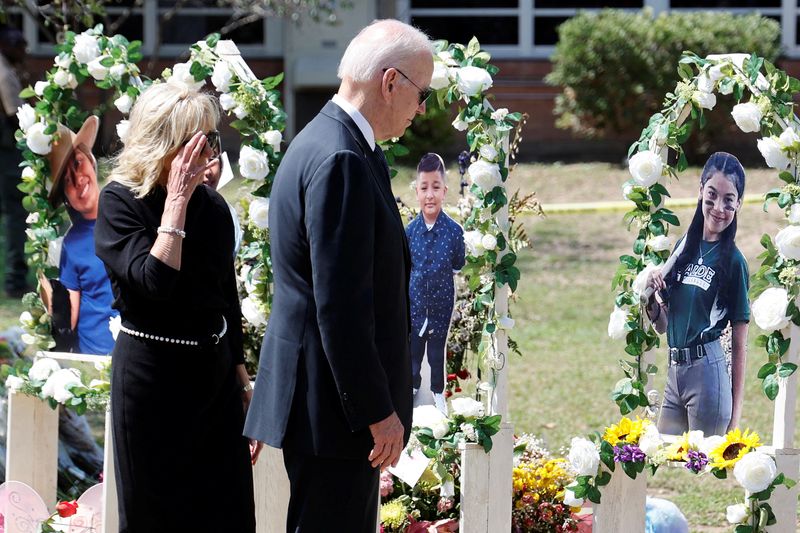