Slowing growth was indicated in other data showing a gauge of future economic activity declining in May for a third straight month. Other data this week showed a drop in retail sales last month as well as steep declines in homebuilding and permits. Weakness in manufacturing output also reflects a shift in spending from goods to services.

“It adds to the evidence that the economy is slowing,” said Andrew Hunter, a senior U.S. economist at Capital Economics. “But there is still little in activity data to suggest a recession is on the horizon, or to dissuade the Fed from pressing ahead with more aggressive policy tightening.”

Strong demand for good has supported manufacturing, which accounts for 12% of the U.S. economy. But spending is gradually reverting back to services, while Russia’s dragging war against Ukraine and China’s zero-tolerance COVID-19 policy have further entangled supply chains.

A strong dollar as a result of rising interest rates could make U.S. exports more expensive. The U.S. central bank has hiked its policy interest rate by 150 basis points since March.

A separate report from the Conference Board on Friday showed its Leading Economic Index fell 0.4% in May, matching the decline in April. Though the index remains near historic highs, it is down 0.4% from last November through May. Last month’s decline was driven by plunging stock prices, the slowdown in homebuilding and gloomier consumer expectations.

“The index remains at a historic high, but recent declines point to a weaker near-term outlook,” said Justin Begley, an economist at Moody’s Analytics in West Chester, Pennsylvania. “As such, growth will be rather tepid.”

Stocks on Wall Street were mostly lower. The dollar rallied against a basket of currencies. U.S. Treasury prices fell.

Though the drop in factory production was tiny and economists expected a rebound, manufacturing is slowing.

A survey from the New York Fed this week showed activity at factories in New York state remained soft in June, with unfilled orders falling for the first time in over a year. Weaker conditions were also reported in the mid-Atlantic region, with the Philadelphia Fed’s measure of manufacturing activity posting a negative reading this month for the first time since May 2020.

“This could be a sign that higher interest rates, tighter financial conditions, and expectations of weaker demand are starting to weigh on business investment,” said Veronica Clark, an economist at Citigroup in New York.

But the output of long-lasting goods fell 0.2%, pulled down by declines in wood products and machinery. Production at auto plants rose 0.7% last month after advancing 3.3% in April.

Mining production increased 1.3% after rising 1.1% in the prior month. It continues to be boosted oil and gas extraction as the Russia-Ukraine war drives up crude prices. Oil and gas well drilling surged 6.2%.

Capacity utilization for the manufacturing sector, a measure of how fully firms are using their resources, edged down 0.1 percentage point to 79.1% in May. It is 1.0 percentage points above its long-run average. Overall capacity use for the industrial sector rose to 79.0% last month from 78.9% in April. It is 0.5 percentage points below its 1972-2021 average.

Officials at the Fed tend to look at capacity use measures for signals of how much “slack” remains in the economy – how far growth has room to run before it becomes inflationary. 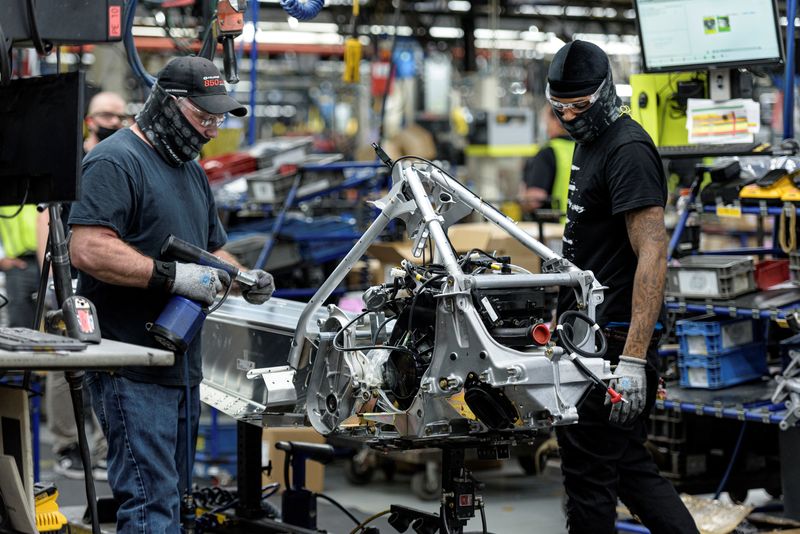