LONDON (Reuters) – Argentina’s long-suffering investors tore into the country’s chaotic politics on Monday after the architect of its IMF programme, economy minister Martin Guzman, quit and was replaced by someone seen as close to the powerful vice president Cristina Fernandez de Kirchner.

Argentina is in the grip of yet another economic crisis as soaring inflation and a shortfall of foreign currency reserves cause concerns in its financial markets.

President Alberto Fernandez named economist and government official Silvina Batakis on Sunday to replace Guzman, whose handling of the economy had come under increasing scrutiny.

JPMorgan’s Argentina economist Diego Pereira said Guzman’s resignation, on Saturday, “opened a new regime of financial and macroeconomic uncertainty” with balance of power now tilted firmly in favor of the “Kirchnerists” loyal to the vice president.

Bondholders meanwhile said that the new attempts to ramp up government spending now would put the country on course for more problems ahead of a presidential election due to be held late next year.

“The market was already very fragile and now it will be scared,” said Riccardo Grassi, Head of Risk Management at investment fund Mangart, which was also involved in the country’s 2020 debt restructuring that Guzman had led.

“If they don’t revise the model they are going to implode.”

Argentina’s problems mean its peso currency now trades at nearly a 50% discount in the black market and its bonds are worth roughly half of what they were after the country’s $100 billion-plus 2020 debt restructuring.

They have been trading at deeply-discounted levels of between 20-25 cents on the dollar in recent weeks, but most bondholders are now clinging on hoping that a change of government next year can turn the country’s approach around.

“If you are a holder, I think that is why you are holder,” Carlos de Sousa at European fund Vontobel, which also holds some of Argentina’s bonds, said referring to the expected change of government next year.

“Let’s see what the new economy minister is going to do – she is not very well known,” he added. “And let’s see how the negotiations with the Paris Club go now because that was a job Guzman didn’t finish.”

Guzman was supposed to travel to France next week to renegotiate more than $2 billion Argentina owes to “Paris Club” countries, a group of 22 nations that lend around the world, and was first set up in 1956 after one of Argentina’s defaults.

Last year the Paris Club had allowed Fernandez’s government more time to pay the money while Guzman hammered out the country’s $44 billion financing programme with the IMF that was agreed this March.

Delvaux added that market participants “haven’t always seen eye to eye with Guzman and his policies but nevertheless, you could have conversation and discussions” with him. The new minister is very aligned with VP Fernandez de Kirchner, “so this is a victory for Cristina and further weaking for President Fernandez”.

There was expected to be little Argentine bond trading on Monday as U.S. markets, where most of it happens, were closed for the July 4 holiday. The currency markets were open but due to tight capital controls, the official peso rate was down a modest 0.5%.

IMF head, Kristalina Georgieva, warned at the time of the deal in March that risks to the Argentine programme were “exceptionally high”, especially as the spillovers from the war in Ukraine were already materializing.

The Fund has come in for criticism though for not insisting on more belt-tightening and orthodox monetary policy such as higher interest rates to tackle inflation. Argentina is the country it lends most money to.

“This is what happens when you help a country escape the regulating function of the markets,” Mangart’s Grassi said, of the problems now being seen. “It is a serious credibility issue for the Fund.”

Argentina’s closely-watched black market peso fell to 255 from 236 pesos per dollar after Guzman’s resignation over the weekend. 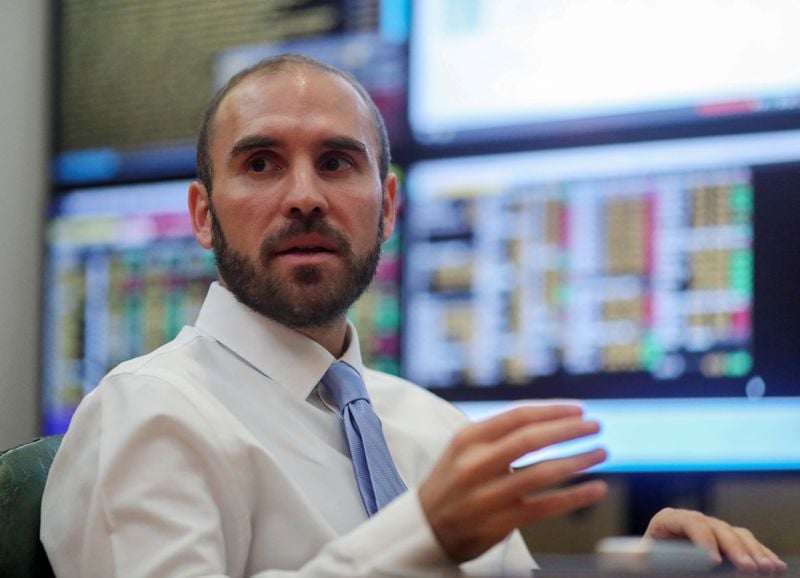