VATICAN CITY – Pope Francis has acknowledged that there is resistance by some national Catholic Churches on implementing measures to protect children from sexual abuse by clergy but said that there is no turning back on an “irreversible” path.

Sexual abuse in the Church and measures to combat it were among one of the many Church and international topics the 85-year-old pontiff discussed in an exclusive interview with Reuters in his Vatican residence on July 2..

In 2019 Francis issued a papal directive ordering “public, stable and easily accessible systems for submission” of reports of sexual abuse in dioceses around the world.

Some countries, such as the United States, established procedures, sometimes known as “listening centres”, even before the 2019 directive, but others, particularly in the developing world, have been slow to conform.

“There is resistance, but with each new step there is growing awareness that this is the way to go,” Francis said.

The Church’s abuse crisis exploded onto the international stage in 2002 when the Boston Globe newspaper revealed priests had sexually abused children for decades and church leaders had covered it up.

Patterns of widespread abuse of children were later reported across the United States and Europe, in Chile and Australia, undercutting the moral authority of the 1.3 billion-member Church and taking a toll on its membership and coffers.

“(After Boston) the Church started zero tolerance slowly and moved forward. And I think the direction taken on this is irreversible,” said Francis, who became pope in 2013.

In 2019, Francis summoned presidents of all the world’s bishops conferences – the leaderships of the national Churches – to Rome for a summit on sexual abuse. By the end of that year he enacted two major pieces of legislation.

The first instituted new reporting procedures and made bishops more accountable. It also broadened the definition of sexual crimes to include vulnerable adults and abuse of office in sexual molestation of seminarians and women religious.

The second was the removal of pontifical secrecy around abuse cases.

In February this year, the pope restructured the Vatican’s doctrinal department to give the disciplinary section that deals with sexual abuse cases more clout, putting it a par with the doctrinal section.

In the interview, the pope said that the change in the doctrinal office was “going well”.

She called the two 2019 legislations positive and long overdue. But she said there was still far too much insularity in the Church and too little external oversight, including from lay Catholics.

“The problem is that the pope wants trust restored on his own impossible terms … the Catholic hierarchy cannot self-police,” she told Reuters in an email, adding that “the twin crises of child sexual abuse and cover-up remain unsolved”.

“The burden of cleaning the Church remains the task of those outside the hierarchy — the victims, whistle blowers, the public, the media, and civil authorities,” she said.

In the interview, Francis said that while statistics showed that only a small percentage of priests were responsible for abuse compared to such crimes within the general population, and that the majority of abuse occurs within the family context, even one episode of abuse in the Church was shameful.

“We have to fight against every single case,” he said. “As a priest, I have to help people grow and save them. If I abuse, I kill them. This is terrible. Zero tolerance,” he said.

Barrett Doyle said zero tolerance “still does not exist” in the Church, adding that not enough clerics involved in abuse cases or their cover-up were being permanently removed from ministry.

In 2014, a year after his election, Francis established the Pontifical Commission for the Protection of Minors to promote best practices and a culture of safeguarding in Catholic communities worldwide.

It got off to a rocky start, with several members resigning in frustration, complaining that it had no teeth and that they had met internal resistance.

The pope later appointed new members and in March this year he gave the commission much more clout when a new Holy See constitution placed it in the doctrinal department, which rules on abuse cases.

The commission is made up mostly of lay people, including survivors of clergy sexual abuse such as Juan Carlos Cruz of Chile, one of most vocal defenders of abuse victims and critics of the Church’s past policies.

Sources say that some Vatican officials look down on the commission, seeing it as being too close to critics.

But in the interview, Francis appeared to go out of his way to praise its president, Cardinal Sean O’Malley of Boston, and its secretary, British priest Andrew Small, as “courageous” men.

For other stories from this exclusive interview:

> Pope to give women a say in appointment of bishops

> Pope hopes China deal on bishops will be renewed soon

> Pope Francis denies he is planning to resign soon

> Excerpts from the pope’s interview with Reuters 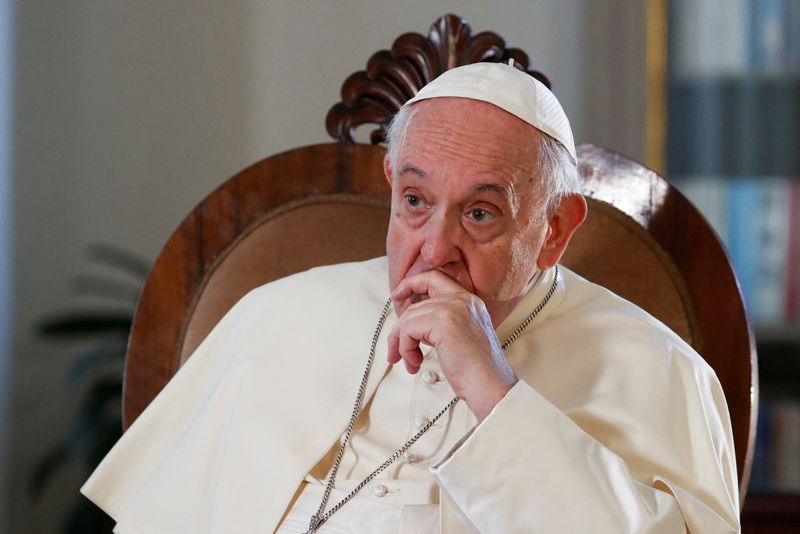