BRUNSWICK, Ga. -A judge sentenced a white father and son to life in prison and their neighbor to 35 years on Monday for a federal hate crime in the 2020 murder of Ahmaud Arbery, a Black man shot after jogging in a suburban Georgia neighborhood.

The three already are serving life sentences after being convicted of murder in a state trial last November, with only Bryan given the possibility of parole. All three then were convicted in February of federal charges of violating Arbery’s civil rights by attacking him because of his race and of attempted kidnapping, with the McMichaels also found guilty of a firearms charge.

They were sentenced on the federal charges in separate hearings on Monday by U.S. District Judge Lisa Godbey Wood. In handing down the younger McMichael’s sentence first, Wood said widely seen cellphone video of him shooting Arbery, 25, at close range with a shotgun was seared into her memory.

“You acted because of the color of Mr. Arbery’s skin,” the judge told McMichael, who looked ashen as the sentence was pronounced.

“I do know that you received a fair trial, it is that kind of a trial that Ahmaud Arbery did not receive before he was shot and killed,” the judge added.

Gregory McMichael, speaking to the court before he was sentenced, told Arbery’s family, “The loss that you’ve endured is beyond description.”

Some of Arbery’s relatives wiped away tears in a courtroom crowded with spectators who included civil rights leader Jesse Jackson.

“I’m sure that my words mean very little to you, but I want to assure you I never wanted any of this to happen,” Gregory McMichael said. “There was no malice in my heart or my son’s heart that day.”

He apologized to his son, who declined his own chance to testify, and to his wife, who began sobbing. He did not explicitly apologize to Arbery’s family.

During his hearing, Bryan said, “I’m glad to finally have the chance to say to Arbery’s family and friends how sorry I am for what happened to him on that day.”

The judge said Bryan deserved a shorter sentence than the McMichaels because he did not bring a gun to the chase.

But the judge also said, “You do not deserve a light sentence.” She added that Bryan would be about 90 years old before he completes his federal sentence.

Marcus Arbery, the slain man’s father, told the court during the first hearing: “These three devils have broken my heart into pieces that cannot be found or repaired.” Referring to Travis McMichael, he added: “You hate Black people.”

“I struggled to come to the realization that a father could actually accompany his son to take a life,” Wanda Cooper Jones, Arbery’s mother, told the second hearing in urging a life sentence for Gregory McMichael.

Lawyers for the McMichaels and Bryan on Monday referred to other deaths of Black Americans, including George Floyd and the 10 men and women shot at a supermarket in Buffalo, New York.

The defense lawyers argued their clients should not be treated more harshly than others similarly accused in a series of cases that have drawn attention to racism and violence in the United States.

Arbery, an avid jogger and fitness buff, was running through the leafy, mostly white Satilla Shores neighborhood, near Brunswick, on a February 2020 afternoon when the McMichaels decided to grab their guns, jump in a pickup truck and give chase. Their neighbor Bryan joined the chase in his own pickup truck and pulled out his cellphone to record Travis McMichael firing a shotgun at Arbery at close range. Arbery had nothing on him besides his running clothes and sneakers.

The video emerged months later, prompting protests in many U.S. cities because the three men had not been arrested after a local prosecutor concluded the killing was justified.

The McMichaels had said they believed that Arbery appeared suspicious, speaking of a series of neighborhood break-ins. No evidence ever emerged connecting Arbery to any Satilla Shore thefts.

The three had been convicted in state court of murder, aggravated assault, false imprisonment and criminal intent to commit a felony, with a jury rejecting self-defense claims. They have appealed.

(Reporting by Rich McKay in Brunswick, Ga.; Additional reporting by Jonathan Allen in New York; Editing by Will Dunham and Donna Bryson) 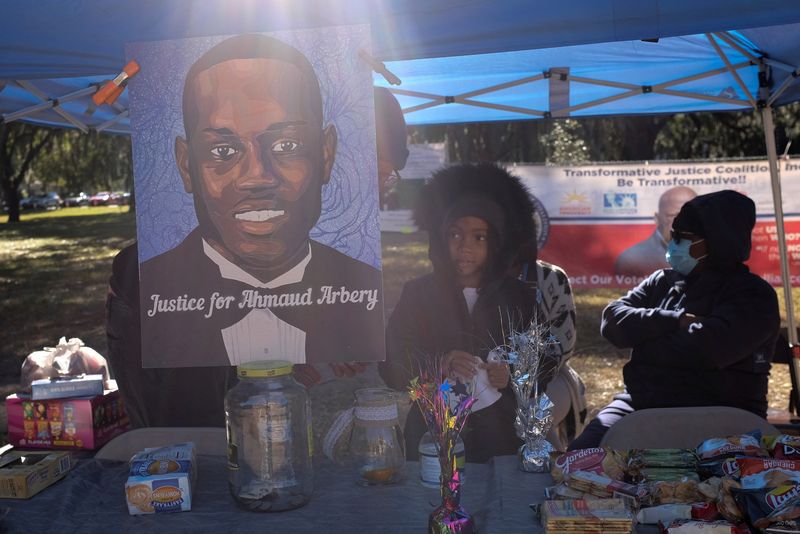