WASHINGTON – Florida Governor Ron DeSantis, widely seen as a potential leading Republican presidential contender, will campaign this month for party candidates endorsed by former President Donald Trump in swing states which will be key to the 2024 White House race.

DeSantis, who is currently running for re-election in Florida, will speak at “Unite and Win” rallies on behalf of congressional and gubernatorial candidates in Arizona, New Mexico, Ohio and Pennsylvania on Aug. 14 and 19, his campaign and rally organizer Turning Point Action said on Monday.

“He’s a wildly popular political figure and I think he can really make a difference for some of these candidates,” said Andrew Kolvet, a spokesman for Turning Point Action, the political arm of the conservative school campus group, Turning Point USA.

The DeSantis campaign declined to comment on his schedule. But his focus on Trump-backed candidates is at odds with former Vice President Mike Pence, another potential 2024 Republican contender who has supported candidates opposed by Trump in Republican primaries this year.

“These are the kinds of things that people do when they’re trying to build a more national profile in preparation for considering races that have national import,” said Kevin Wagner, political science professor at Florida Atlantic University.

“It’s also the kind of thing you sometimes see candidates do in support of other candidates that they like,” he added.

The Florida governor’s rally schedule focuses on Trump-endorsed candidates who have won their party primary elections but have struggled to gain the upper hand against Democratic rivals ahead of the Nov. 8 midterms.

DeSantis will appear on behalf of U.S. Senate Republican candidates Blake Masters and J.D. Vance, as well as Republican gubernatorial candidates Kari Lake of Arizona and Doug Mastriano of Pennsylvania, who are all trailing their Democratic rivals in polling three months ahead of the November elections.

DeSantis is also scheduled to join a New Mexico rally for Republican gubernatorial candidate Mark Ronchetti and House of Representatives incumbent Yvette Herrell, who are running neck-and-neck against their Democratic opponents.

“Governor DeSantis is that unique political figure who has the ability to appeal to independents and rally support on the margins. These races are going to be won by 1, 2, 3 percent. His appeal is strong enough that he can deliver,” Kolvet said.

Trump, who remains the dominant figure in the Republican Party, has spent months actively stumping for his endorsed candidates in multiple states during the primary season. His seal of approval could prove to be a liability with independent voters in the general election.

But while he flirts with supporters about his own 2024 presidential run, his standing within the Republican Party has also weakened slightly, as a result of congressional hearings on the deadly Jan. 6, 2021, attack on the U.S. Capitol by his supporters.

One third of Republican respondents to a Reuters/Ipsos poll last month said they think Trump should not run for president again in 2024. 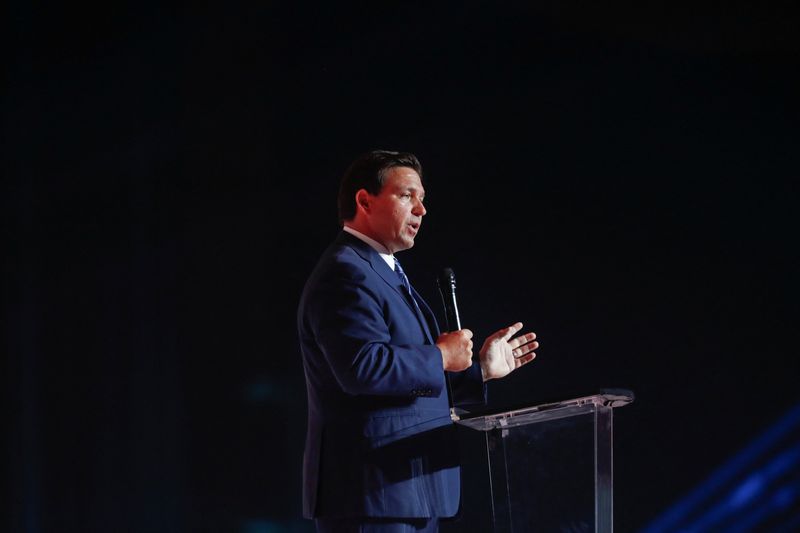