SEOUL – South Korea foreign minister Park Jin is set for his first visit to China on Monday as President Yoon Suk-yeol’s government seeks to reassure Beijing about their relationship despite stronger ties with the United States and tensions over Taiwan.

Park is scheduled for a three-day stay in the eastern port city of Qingdao, during which he will hold talks with Chinese Foreign Minister Wang Yi, Seoul’s foreign ministry said. Park is the first high-level official to travel to China since Yoon took office in May.

His trip comes after Beijing expressed outrage over U.S. House Speaker Nancy Pelosi’s visit to Taiwan last week. China claims the self-governed island as its own.

Yoon faced criticism from lawmakers – some from his ruling party – for not meeting with Pelosi. Yoon, who was on vacation, held a phone call with her instead. His office said that the decision was made in consideration of national interests, and that there was no pressure from Beijing.

Stakes are high for Park’s visit, as Seoul walks a fine line between its alliance with the United States and with China, South Korea’s top trade partner, amid their intensifying rivalry.

Park has said his trip would be a chance to reduce misunderstandings and boost cooperation in areas including trade, health and environment.

“By actively promoting strategic high-level communication, we can have better understanding of each other, reduce unnecessary misunderstanding and expand common interests,” he said at a news conference.

Park noted that when he met Wang at the G20 foreign ministers’ meeting last month in Thailand, he said South Korea’s strengthening U.S. alliance and participation in a U.S.-backed economic forum for Asia, which Beijing said was designed to decouple https://www.reuters.com/world/beijing-says-us-backed-asia-plan-seeks-decouple-countries-china-2022-05-25 countries from its economy, was not meant to “neglect or set aside” China ties.

Both sides also face a potential flare-up over the THAAD U.S. missile defence system stationed in South Korea, as well as Seoul’s possible participation in a U.S.-led chip alliance involving Taiwan and Japan, which China opposes.

Yoon vowed to purchase and deploy another THAAD battery, and abandon his predecessor’s promise in 2017 to China of the so-called “Three Nos” – no additional THAAD deployments, no participation in a U.S.-led global missile shield, and no creation of a trilateral military alliance involving Japan.

China argues the system’s powerful radar could peer into its airspace, and relations suffered a setback after China sharply cut trade and cultural imports.

Beijing’s foreign ministry has been calling for Seoul to keep the promise, but Park told a recent parliamentary questioning that the “Three Nos” are not an official pledge or agreement.

The Yonhap news agency reported on Monday that South Korea has decided to attend a preliminary meeting for the chip pact, dubbed “Chip 4,” citing an unnamed senior presidential official.

Yoon said his government is looking into the issue in light of national interests, and the foreign ministry said no decision has been made. 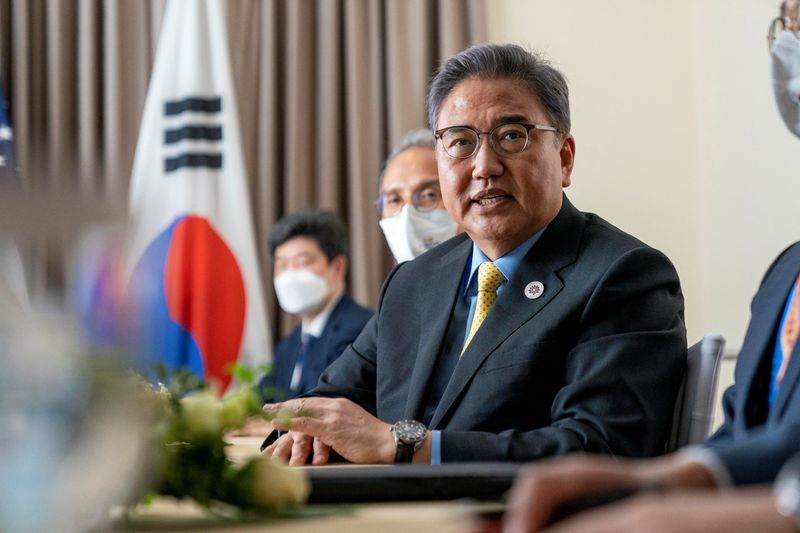