By Lewis Krauskopf and David Randall

NEW YORK (Reuters) -An already-murky outlook for U.S. stocks and bonds is growing darker, as sizzling inflation ratchets up expectations for how aggressively the Federal Reserve will need to raise rates.

For weeks, investors had debated whether the full extent of Fed hawkishness had been priced into markets, after the central bank already raised rates by 225 basis points this year, with many penciling in another 75 basis point rate hike at its meeting next week.

Tuesday’s hotter-than-expected inflation report – which slammed stock and bond prices – is bolstering the case for those who argue the central bank will need to be far more hawkish than anticipated in the weeks ahead. That’s forcing investors to gird themselves for a potentially bigger dose of Fed tightening that has rocked asset prices all year.

The closely watched CPI report showed U.S. consumer prices unexpectedly rose in August, with such prices rising at an annual pace of 8.3%, not far from the four-decade peak reached in June.

“The Fed was already going on a tightening path in the next several months and now they have got to actually increase that given this report,” said Matthew Miskin, co-chief investment strategist at John Hancock Investment Management. “It’s pretty negative across the board for markets.”

Fed funds futures are now pricing in a roughly 36% chance that the Fed next week raises its benchmark rate by a full percentage point, a view supported by analysts at Nomura, who on Tuesday forecast a 100 basis point hike in September. Some analysts also raised expectations on how high the central bank will lift rates in coming months.

The reaction in markets was swift: the benchmark S&P 500 ended down 4.3% on Tuesday and the tech-heavy Nasdaq fell 5.2%, the biggest one-day drops for both indexes since June 2020. Yields on the benchmark U.S. 10-year Treasury note, which move inversely to bond prices, rose as high as 3.46%, the highest in about three months.

Growing expectations for Fed hawkishness are an unwelcome development for a market already contending with uncertainty on multiple fronts, from worries over whether the central bank’s inflation fight will bring in a recession to the knock-on effects of rising real yields on asset prices.

September also sees the Fed ramp up the unwinding of its balance sheet to $95 billion per month, a move some investors worry may add volatility in markets and weigh on the economy.

Phil Orlando, chief equity strategist at Federated Hermes, said the market “at a minimum” could test its mid-June low of around 3,600.

“The market has been completely wrong in judging the inflation question,” he said. “Today … was a massive wake-up call that forced equity investors to face reality.”

Even the time of year is to some, a source of concern: the S&P 500 has fallen an average of 0.5% in September since 1950, the worst monthly performance for the index, according to the Stock Trader’s Almanac. So far for the month, the index was logging a 0.6% loss; for the year it is down over 17%.

Tuesday’s inflation report put further pressure on a rebound that had seen the S&P 500 rise by 17% from its mid-June low. Stocks have now given back roughly half of those gains.

It also dashed some optimism that the Fed would soon be able to “pivot” to easing monetary policy, hopes for which has periodically helped support risk assets.

“Any impending Fed pivot isn’t in front of us and this data point confirms that,” said Matt Peron, director of research at Janus Henderson Investors. “The market got a little ahead of itself over the last couple of weeks with the peak hawkishness narrative.”

More declines in stocks and bonds promise further pain to investors who had counted on a mix of the two asset classes to cushion market declines.

So-called 60/40 portfolios – which hold 60% of their assets in equities and 40% in bonds in anticipation that declines in one asset class will lead to gains in the other – are down more than 12% for the year to date, their worst performance since 1936, according to BofA Global Research.

Of course, many investors have been preparing for more volatility after an already rocky year so far. Fund managers increased cash balances to 6.1% in September, the highest in over 20 years, according to BofA Global Research’s monthly survey released on Tuesday.

“The key question is at what point does the Fed build enough confidence that they’ve done enough. It’s clear that we’re not near that point now,” said Ed Al-Hussainy, senior global rates strategist at Columbia Threadneedle. “On the risk asset side I think there’s more damage to be done.” 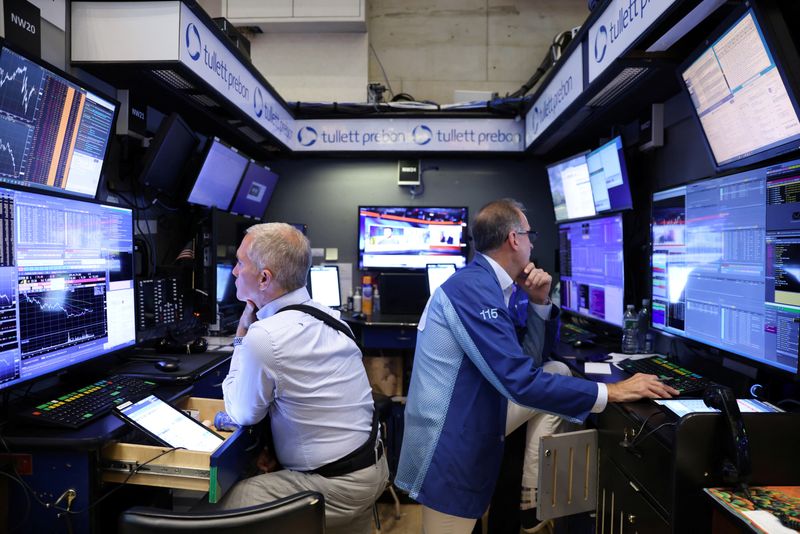