(Reuters) – Donations for an Iowa teenager poured in on Thursday, doubling the $150,000 amount a court ordered her to pay the family of a man whom she killed after he allegedly sexually assaulted her on multiple occasions.

As of Thursday morning, a GoFundMe fundraiser for Pieper Lewis, 17, had raised more than $340,000, well past its $200,000 goal, less than two days after a judge sentenced the Des Moines teen in the killing of her accused rapist, whom she stabbed to death in 2020.

“As the donations have increased, I am overjoyed with the prospect of removing this burden from Pieper,” said Leland Schipper, her former high school math teacher, who set up the page to help pay the restitution and for her education.

Lewis pleaded guilty to voluntary manslaughter and willful injury in June 2021, a year after she killed Zachary Brooks, 37, in Des Moines. Lewis was 15 years old and homeless when she met Brooks in May 2020.

Lewis said she was a victim of sex trafficking and that Brooks sexually assaulted her on the night they met and again the night she stabbed him to death in a fit of rage while he slept.

“My story can change things. My story has changed me,” Lewis said during her sentencing hearing on Tuesday. “The events that took place on that horrific day cannot be changed, as much as I wish I could.”

During the hearing, Polk County District Judge David Porter sentenced Lewis to five years probation and ordered her to perform 1,200 hours of community service. He also ordered her to pay $150,000 to Brooks’ family, saying he was bound by Iowa law to require her to pay restitution, the Des Moines Register reported.

Her attorneys were considering appealing the restitution order. The office of Iowa Attorney General Tom Miller said donations can be used to pay the restitution, the Des Moines Register reported.

(Reporting by Brendan O’Brien in Chicago; editing by Jonathan Oatis) 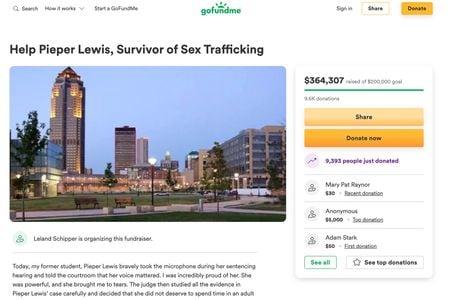