WASHINGTON (Reuters) – U.S. Senator Joe Manchin on Wednesday released an energy permitting bill to speed approvals for natural gas pipelines and power transmission for renewable energy, legislation that some fellow Democrats criticized and will likely need to be amended in order to gain enough support.

The 91-page bill is expected to be attached to a measure to temporarily fund the government that Congress must pass before Oct. 1 to prevent a federal shutdown.

The wider funding bill needs approval of the House and Senate and to be signed by President Joe Biden to become law. Manchin’s staff told reporters he believes the funding bill will get 60 votes needed to pass the Senate with the permitting measure attached.

The permitting measure from Manchin, a centrist Democrat and an important swing vote in the 50-50 Senate, would require Biden to designate 25 energy projects of strategic national importance for speedy federal review.

The U.S. electricity grid needs expansion and fixes as some of its major transmission lines are 50 years old. Improving transmission lines would help renewable projects like wind and solar farms in rural areas get clean power to cities.

The bill also sets a two-year target for environmental reviews on energy projects that need to be completed by more than one federal agency.

Progressive lawmakers and environmental groups have been concerned that it would speed fossil fuel projects by undermining U.S. environmental laws. In the House of Representatives, 77 Democrats this month asked Speaker of the House Nancy Pelosi in a letter to keep the side deal out of the funding bill.

House Natural Resources Committee Chair Raul Grijalva, a Democrat who had spearheaded that letter, said the bill resembled a draft that had been leaked months ago.

“The very fact that this fossil fuel brainchild is being force-fed into must-pass government funding speaks to its unpopularity,” Grijalva said in a release. “My colleagues and I don’t want this.”

Senator Tim Kaine, a Democrat from Virginia, said after the bill was released he could not support its “highly unusual provisions” regarding Mountain Valley Pipeline.

Kaine said they “eliminate any judicial review” for key parts of the pipeline approval process and strip jurisdiction away from a U.S. Court of Appeals for cases involving it. Kaine said he had not been included in talks about the measure, even though 100 miles (160 km) of the pipeline would run through his state.

While the bill would speed up the process of a bedrock U.S. green law called the National Environmental Policy Act, which requires reviews of major projects, “it doesn’t amend the underlying statutes,” a member of Manchin’s staff told reporters.

Getting at least 10 Republican senators to support the measure before Oct. 1 could be complicated after Senator Shelley Moore Capito, a Republican from Manchin’s state, issued her own bill this month more favorable to fossil fuels.

Some Republicans were also concerned that Manchin voted for Biden’s Inflation Reduction Act that contained $369 billion for climate and energy security.

“If they’re willing to say they’re going to shut down the government because of a personal attack on me, or by not looking at the good of the country, that is what makes people sick about politics,” Manchin said on Tuesday about the unwillingness of some Republicans to support permitting. 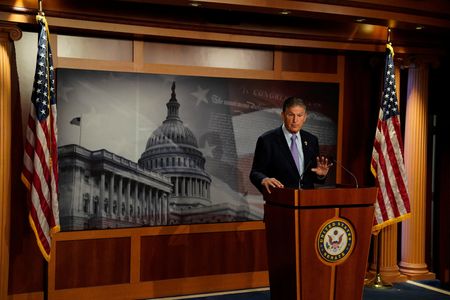