NEW YORK (Reuters) – The head of Sudan’s ruling council General Abdel Fattah al-Burhan told Reuters late on Thursday that no fixed date had been set for elections, but the military would not wait forever.

Burhan, who derailed a political transition 11 months ago by dissolving a civilian-led government, had previously indicated that elections would be held in 2023.

The takeover he led halted a power-sharing agreement between the army and civilians, triggering mass street protests and a stand-off between the military and pro-democracy parties.

After the deadlock deepened, Burhan said in July the army would step aside from political talks.

“We are waiting, we do not want to insert ourselves in this political process,” Burhan said in an interview on the sidelines of the United Nations General Assembly in New York, when asked about a date for elections. “Of course we will not wait endlessly,” he added.

Opponents blame Burhan for upending a transition towards democracy and an economic opening after the ouster of former leader Omar al-Bashir in a 2019 popular uprising.

The military leadership said it took over because of political infighting among civilian parties, but the move attracted sharp condemnation from Western powers and the suspension of billions of dollars of international assistance.

“If it was up to us, we would have completed the transitional duties by now, but the civilian forces and regional and international community asked us to stop,” Burhan said, when asked about the election date.

Burhan indicated his acceptance of a recent statement by his deputy General Mohamed Hamdan Dagalo that civilians should name a future prime minister and head of the ruling sovereign council, saying it was consistent with what he himself had said previously.

Burhan also said a deal to establish a Russian base on Sudan’s Red Sea coast was still under discussion, and that the two countries had normal relations.

He denied recent reports that Sudanese gold was being shipped to Russia, saying only certain entities were responsible for exports. 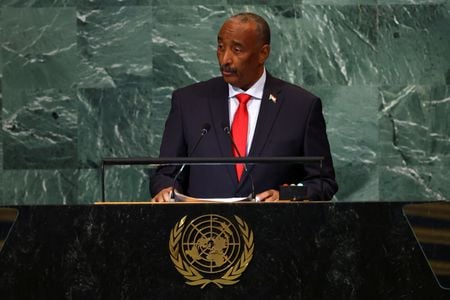