ROME (Reuters) – At 2:30 a.m. came the moment that militants of the right-wing Brothers of Italy party had been waiting for, when their leader Giorgia Meloni appeared at the luxury hotel in Rome housing her electoral headquarters.

A roar went up as Meloni began to speak, recalling the sacrifices made over the years as the party rose from being a marginal far-right group to become Italy’s strongest political force at Sunday’s election.

“It’s a dream,” Fabio Rampelli, a party founder, told Reuters as he hugged a tearful activist who whispered to him the single word, “finally!”.

Brothers of Italy traces its roots to the post-fascist Italian Social Movement (MSI), considered a political pariah by the country’s mainstream until it was dissolved in the mid-1990s.

All that is in the past. Meloni won around 26% of the vote at Sunday’s election, projections showed as the count continued, surging from 4% in the last election in 2018.

The centre-right bloc she spearheads is seen winning a comfortable majority in both houses of parliament, paving the way for her to become Italy’s first woman prime minister.

“For many of us this is a night of pride, redemption, tears, hugs, dreams and memories,” she told party members and reporters, standing in front of the Brothers of Italy’s controversial flame logo.

She says the flame represents the evolution of the Italian right, while critics say it is a vestige of the old MSI who used the same symbol.

“This is a starting point, not a finishing line, from tomorrow we have to prove our worth,” said an emotional Meloni.

Marco Marsilio, Brothers of Italy’s president of the central Abruzzo region, said he had been waiting for this moment all his life.

“20 or 30 years ago this sounded like madness, let’s hope God forgives us for this madness,” he told Reuters.

The Italian hard right has its historical strongholds in central and southern Italy, but some of its militants come from regions with a left-wing tradition.

For them, the victory is even more special.

Giovanni Donzelli was born in left-leaning Florence and joined the right in 1994, when he was 19.

“The day after I joined the rightist university movement … I came home to tell the family. My socialist grandfather and moderate leftist mother didn’t react well. My mother started crying, my grandfather choked on his food,” he said. 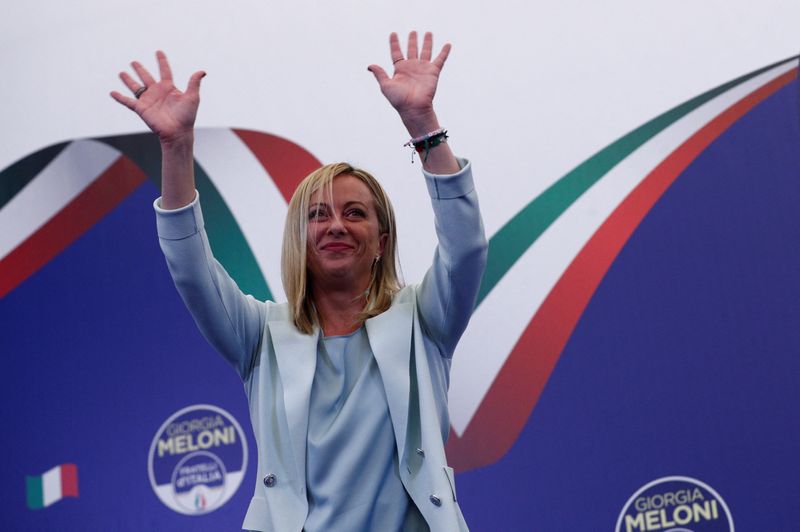