(Reuters) -European shares climbed on Friday but saw sharp losses during a quarter marked by rising interest rates and tumbling risk sentiment, with hot inflation data from the region keeping investors on edge.

The region-wide STOXX 600 index closed up 1.3% but had briefly pared some session gains after data showed euro zone inflation zoomed past forecasts to 10.0% in September, hitting a new record high.

The inflation numbers fuelled expectations of another super-sized interest rate hike from the European Central Bank.

All of the STOXX sectors ended the day in positive territory, with bargain hunting driving gains among beaten-down retailers, oil and gas and bank stocks.

“It’s only a small consolidation but it’s a step in the right direction. It’s hard to know to know if we have reached the absolute low,” said Michael Baker, head of online services at Oval Money.

“Till inflation comes under control, you’ll see a kind of unease (in markets).”

The STOXX 600 index has fallen 4.8% during the July-September period marking its third straight quarterly decline in what will be its longest such losing streak since 2011.

Markets have been roiled since the Russia-Ukraine war earlier this year jolted the region and sent gas prices soaring, leading to rampant inflation, which sparked aggressive rate hikes from central banks and worries about a subsequent growth slowdown.

A string of recent inflation numbers have exacerbated concerns about the pace and extent of monetary policy tightening globally.

Meanwhile, inflation in the Netherlands touched its highest in decades on skyrocketing energy prices, adding to concerns around grim inflation numbers from Germany reported on Thursday.

London’s blue-chip FTSE 100 briefly dipped before closing up 0.2% while the domestically-focused mid-caps index jumped 2.3% as the pound gained ground after the Bank of England’s intervention in bond markets.

A Reuters poll found the BoE was unlikely to raise rates before its next scheduled policy meeting in November despite a recent hit to sterling from its controversial economic growth plans announced last week.

On the geopolitical front, President Vladimir Putin proclaimed Russia’s annexation of a swath of Ukraine, even as Russian forces face setbacks on the battlefield. The Russian president’s proclamation of Russian rule over 15% of Ukraine has been firmly rejected by Western countries and even many of Russia’s close allies. 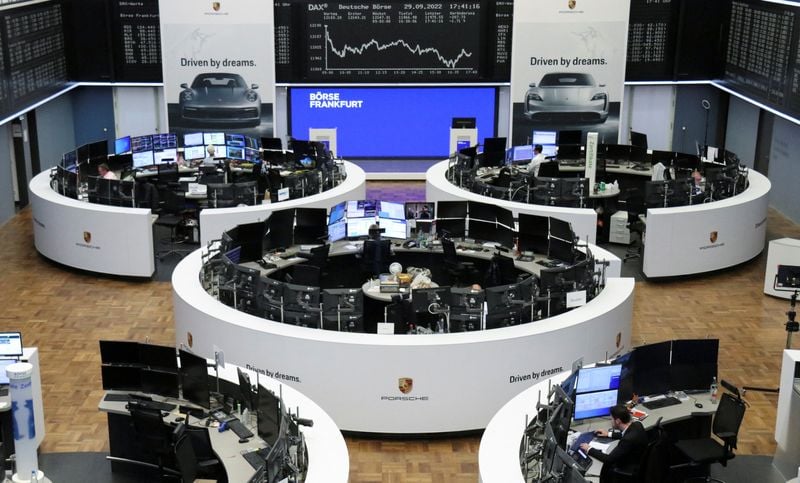