(This Oct. 1 story corrects to remove extraneous word in the first paragraph)

MALANG, Indonesia (Reuters) – A stampede at a soccer stadium in Indonesia has killed 125 people and injured more than 320 after police used tear gas to quell a pitch invasion, authorities said on Sunday, in one of the world’s worst stadium disasters.

Officers fired tear gas in an attempt to disperse agitated supporters of the losing home side who had invaded the pitch after the final whistle in Malang, East Java, on Saturday night, the region’s police chief Nico Afinta told reporters.

“It had gotten anarchic. They started attacking officers, they damaged cars,” Nico said, adding that the crush occurred when fans fled for an exit gate.

World soccer’s governing body FIFA specifies in its safety regulations that no firearms or “crowd control gas” should be carried or used by stewards or police.

East Java police did not respond to a request for comment on whether they were aware of the regulations against using gas in stadiums.

“Many of our friends lost their lives because of the officers who dehumanised us,” said Muhammad Rian Dwicahyono, 22, crying as he nursed a broken arm at the local Kanjuruhan hospital. “Many lives have been wasted.”

The stadium disaster appeared to be the world’s worst in decades. Wiyanto Wijoyo, the head of Malang’s health agency, put the final death toll at 125, and injuries at 323.

Video footage from local news channels showed fans streaming onto the pitch after Arema FC lost 3-2 to Persebaya Surabaya around 10 p.m. (1500 GMT), followed by scuffles, and what appeared to be clouds of tear gas and unconscious fans being carried out of the venue.

Many victims at the nearby Kanjuruhan hospital suffered from trauma, shortness of breath and a lack of oxygen due to the large number of people at the scene affected by the gas, said hospital head Bobi Prabowo.

Bobi told Metro TV that some victims had sustained brain injuries and that the fatalities included a 5-year-old.

President Joko Widodo said authorities must thoroughly evaluate security at matches, adding that he hoped this would be “the last soccer tragedy in the nation”.

Jokowi, as the president is known, ordered the Football Association of Indonesia, PSSI, to suspend all games in the top league BRI Liga 1 until an investigation had been completed.

Inside the stadium at night, a burned chair still lay unattended while slippers and shoes were strewn haphazardly. A damaged police car was also towed outside in a clean-up.

At a funeral of two brothers, age 14 and 15, in Malang who had been attending a soccer match for the first time, their relative Endah Wahyuni said: “My family and I didn’t think it would turn out like this,” adding that they were “quiet and obedient.”

FIFA President Gianni Infantino said in a statement to Reuters that the football world was in “a state of shock following the tragic incidents that have taken place in Indonesia” and the event was “dark day for all involved”.

FIFA has requested a report on the incident from PSSI, which has sent a team to Malang to investigate, PSSI secretary general Yunus Nusi told reporters.

Indonesia’s human rights commission also plans to investigate security at the grounds, including the use of tear gas, its commissioner told Reuters.

On Sunday mourners gathered outside the gates of the stadium to lay flowers for the victims. Later at night people burned candles in a vigil at a lion statue, the local club’s symbol.

Amnesty International Indonesia slammed the security measures, saying the “use of excessive force by the state … to contain or control such crowds cannot be justified at all”.

The country’s chief security minister, Mahfud MD, said in an Instagram post that the stadium had been filled beyond its capacity. Some 42,000 tickets had been issued for a stadium designed to hold 38,000 people, he said.

Financial aid would be given to the injured and the families of victims, East Java Governor Khofifah Indar Parawansa told reporters.

There have been outbreaks of trouble at matches in Indonesia before, with strong rivalries between clubs sometimes leading to violence among supporters.

Crowds pack stadiums but the football scene in Indonesia, a country of 275 million people, has been blighted by hooliganism, heavy-handed policing and mismanagement.

Periodic stadium disasters have horrified fans around the world. In 1964, 328 people were killed in a crush when Peru hosted Argentine at the Estadio Nacional.

In a 1989 British disaster, 96 Liverpool supporters were crushed to death when an overcrowded and fenced-in enclosure collapsed at the Hillsborough Stadium in Sheffield.

Indonesia is scheduled to host the FIFA under-20 World Cup in May and June next year. They are also one of three countries bidding to stage next year’s Asian Cup, the continent’s equivalent of the Euros, after China pulled out as hosts.

The head of the Asian Football Confederation, Shaikh Salman bin Ebrahim Al Khalifa, said in a statement he was “deeply shocked and saddened to hear such tragic news coming out of football-loving Indonesia”, expressing condolences for the victims, their families and friends. 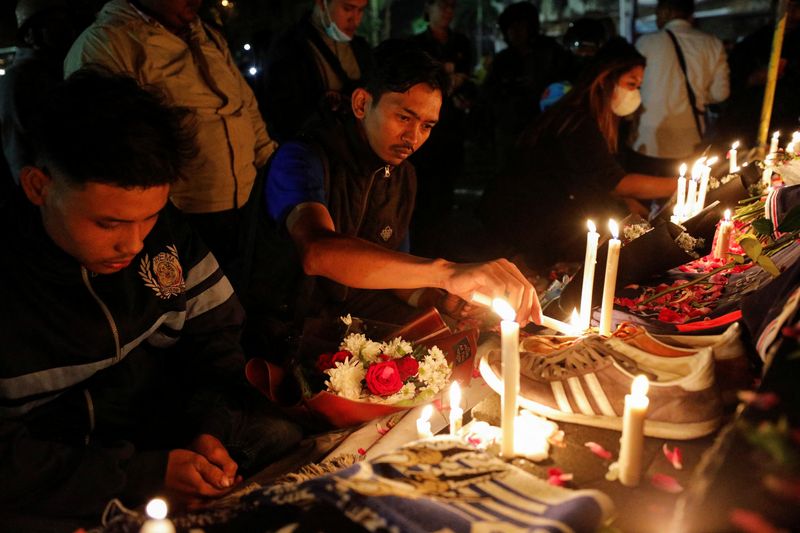 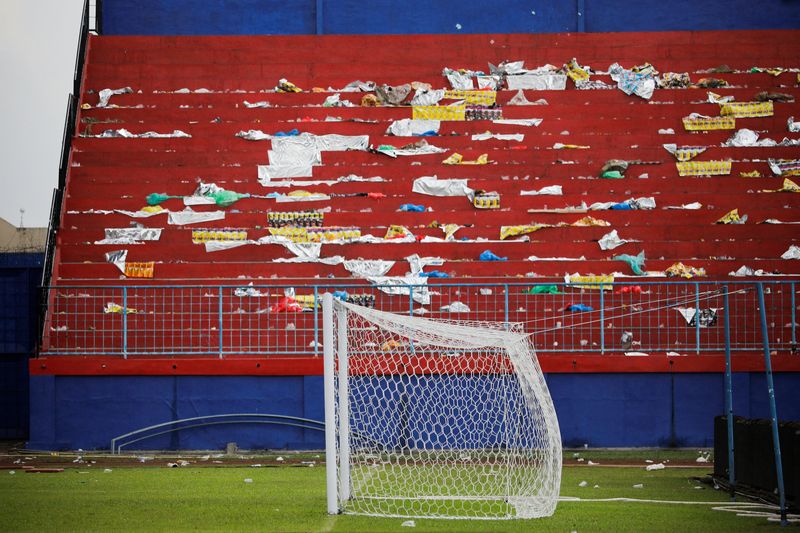 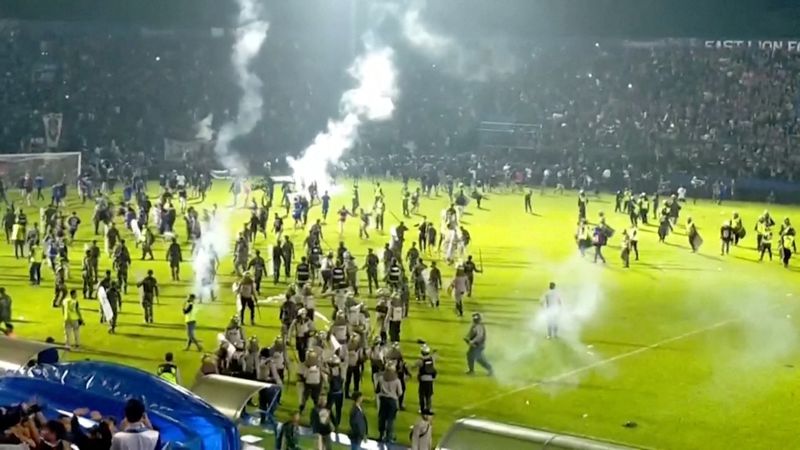 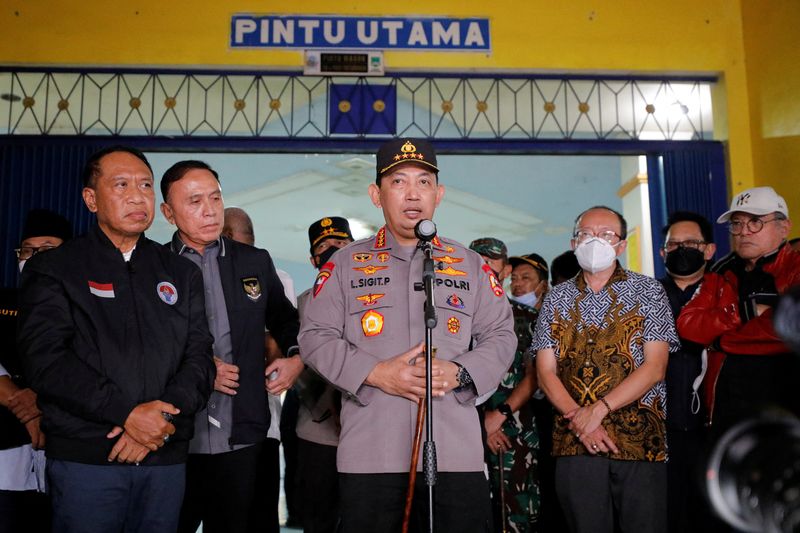 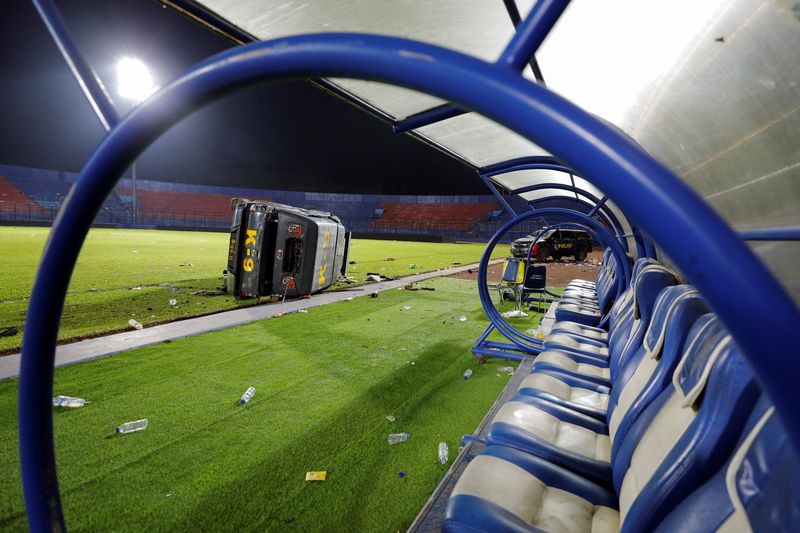