The Institute for Supply Management (ISM) survey on Monday also showed a measure of manufacturing employment contracted last month for the fourth time this year. A gauge of inflation at the factory gate decelerated for a sixth straight month.

Fiore, however, noted that there were no comments from firms about large-scale layoffs, which he said indicated that “companies are confident of near-term demand.” The Fed’s tighter monetary policy campaign has raised fears of a recession next year, triggering a sharp sell-off on the stock market.

“In many ways, this is the cooling economy the Fed would like to see,” said Will Compernolle, a senior economist at FHN Financial in New York. “It could, however, merely reflect a consumer shift away from goods towards services.”

The ISM’s manufacturing PMI dropped to 50.9 this month, the lowest reading since May 2020, from 52.8 in August. ISM said the fall in the index “reflects companies adjusting to potential future lower demand.” A reading above 50 indicates expansion in manufacturing, which accounts for 11.9% of the U.S. economy.

Economists polled by Reuters had forecast the index slipping to 52.2. Nine manufacturing industries, including machinery, transportation equipment and computer and electronic products reported growth. Furniture and related products as well as textile mill and wood products were among the seven industries reporting a contraction.

Some of the slowdown in manufacturing reflects the rotation of spending from goods to services. Government data last Friday showed spending on long-lasting manufactured goods barely rising in August, while outlays on services picked up.

The U.S. central bank has since March hiked its policy rate from near zero to the current range of 3.00% to 3.25%, and last month signaled more large increases were on the way this year.

The higher borrowing costs are undercutting spending on big-ticket items like household appliances and furniture, that are typically bought on credit.

Construction has also not been spared. A separate report from the Commerce Department on Monday showed construction spending fell by the most in 1-1/2 years in August as single-family homebuilding tumbled 2.9%.

“It all comes back to higher borrowing costs and weaker demand,” said Jennifer Lee, a senior economist at BMO Capital Markets in Toronto. “The mild recession call still holds.”

Stocks on Wall Street were trading higher. The dollar fell against a basket of currencies. U.S. Treasury prices rose.

Transportation equipment manufacturers said “production is steady, allowing reduction of backlog amidst slightly softened demand.” Makers of fabricated metal products reported that “business is flat to down due to inflation and interest rates.”

Makers of electrical equipment, appliances and components said “business continues to be strong.”

The ISM survey’s forward-looking new orders sub-index fell to 47.1 last month, also the lowest reading since May 2020, from 51.3 in August. It was the third time this year that the index has contracted.

Export orders also contracted amid weak demand in Europe, a sluggish Chinese economy and strong dollar. Order backlogs are also being whittled down and inventories at manufacturers and their customers are nearing normal levels.

While shrinking backlogs pointed to a further slowdown in manufacturing, it was also a function of easing bottlenecks in the supply chain. The ISM’s measure of supplier deliveries fell to 52.4, the lowest reading since December 2019, from 55.1 in August. A reading above 50% indicates slower deliveries to factories.

Supply views were mixed. Electrical equipment, appliances and components manufacturers said “some commodities within the supply chain are starting to stabilize, while others are still causing disruption for production.”

But machinery manufacturers reported that “supply chain constraints on many items are still an issue,” also noting that “staffing on the production side continues to be a significant problem.” Similar views were echoed by makers of computer and electronic products who reported that “supply chain issues for all electronic components and custom build-to-print materials are in short supply due to capacity and skilled labor shortages.”

A measure of prices paid by manufacturers dropped to 51.7, the lowest reading since June 2020, from 52.5 in August. The slowdown is largely driven by retreating commodity prices. Annual consumer and producer inflation decelerated in August, raising hope that prices had peaked.

The ISM survey’s measure of factory employment dropped to 48.7 from 54.2 in August. Though the index has contracted four times this year, it has been a poor predictor of manufacturing payrolls in the government’s closely watched employment report, which have consistently grown.

While job growth is slowing, demand for workers remains strong. There were 11.2 million unfilled jobs across the economy at the end of July, with two job openings for every unemployed worker. First-time claims for unemployment benefits remain low.

“Employees may have simply voluntarily left manufacturing jobs in favor of other types of jobs,” said Isfar Munir, an economist at Citigroup in New York. 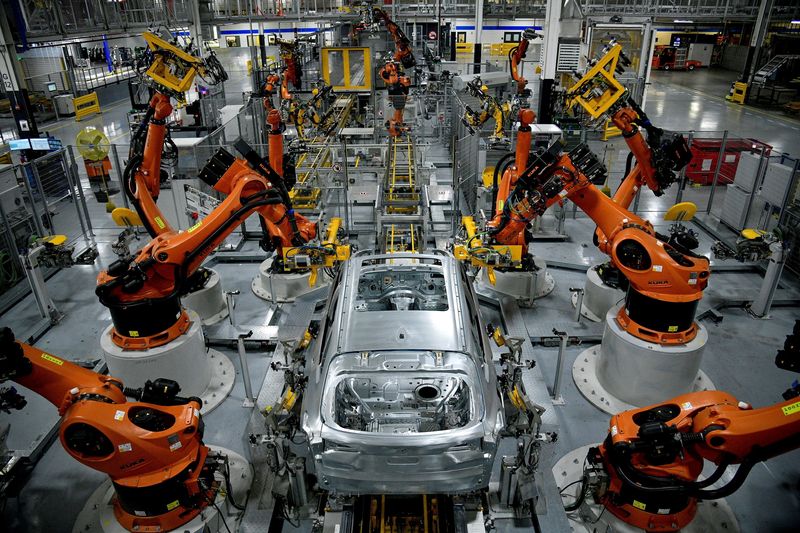