WASHINGTON (Reuters) – The U.S. Supreme Court, which expanded gun rights in a major decision in June, on Monday declined to hear a challenge to a federal ban on devices called “bump stocks” that enable semi-automatic weapons to fire like a machine gun – a firearms control measure prompted by a 2017 Las Vegas mass shooting.

The justices turned away appeals by a Utah gun lobbyist named Clark Aposhian and firearms rights groups of lower court rulings upholding the ban as a reasonable interpretation of a federal law prohibiting machine gun possession.

At issue was action by former President Donald Trump Trump’s administration to reclassify bump stocks as prohibited machine guns under U.S. law in a policy that went into effect in 2019.

Bump stocks use a gun’s recoil to bump its trigger, enabling a semiautomatic weapon to fire hundreds of rounds per minute to let it shoot like a machine gun. Trump pledged to ban them soon after a gunman used semiautomatic weapons outfitted with bump stock devices in a shooting spree that killed 58 people at a country music festival in Las Vegas.

Following the massacre, the Bureau of Alcohol, Tobacco, Firearms and Explosives (ATF), a U.S. Justice Department agency, reversed a previous conclusion and classified bump stocks as forbidden under a 1934 U.S. law called the National Firearms Act enacted in response to the gangster violence of that era. Trump also directed the Justice Department to issue a rule to ban bump stocks.

In a 6-3 ruling in June powered by its conservative justices, the court declared for the first time that the U.S. Constitution protects an individual’s right to carry a handgun in public for self-defense. The decision handed a victory to gun rights advocates in a nation deeply divided over how to address firearms violence.

The court’s three liberal justices dissented from that ruling, which struck down New York state limits on carrying concealed handguns outside the home.

The ban on bump stocks, put in place without congressional action, required owners to turn in or destroy the attachments, with those caught in possession of bump stocks facing up to 10 years in prison.

Only rarely do gun control measures get enacted at the federal level. President Joe Biden in June signed into law the first major federal gun reform in three decades, two days after the Supreme Court’s decision in the New York case. That law was designed to help prevent people deemed dangerous from accessing guns and increase investments in the U.S. mental health system.

Aposhian is the chairman of the Utah Shooting Sports Council, according to its website. The group lobbies the Utah State Legislature “to defeat gun control and pass pro-gun legislation.”

Aposhian sued to halt the ban in 2019, challenging the ATF’s authority in reclassifying bump stocks as forbidden machine guns. After a federal judge refused to grant him an injunction early in the case, Aposhian surrendered his bump stock, pending the outcome of the litigation.

The Denver-based 10th U.S. Circuit Court of Appeals in 2020 upheld the ban, declining to second guess the ATF’s reinterpretation of the term “machine gun” under federal law.

Separately, gun owner advocacy groups including Gun Owners of America and three of its individual members, sued in federal court in Michigan to block the bump stock ban from taking effect. The Cincinnati-based 6th U.S. Circuit Court of Appeals in 2021 upheld the ban.

The appeals to the Supreme Court argue that the lower courts impermissibly deferred to the ATF’s actions.

The Supreme Court in 2019 declined to block the ban from going into effect.

The National Rifle Association, a gun rights group closely aligned with Republicans, filed a friend-of-the-court brief with the Supreme Court in support of Aposhian. Trump’s fellow Republicans favor a broad interpretation of the right to keep and bear arms promised in the U.S. Constitution’s Second Amendment. 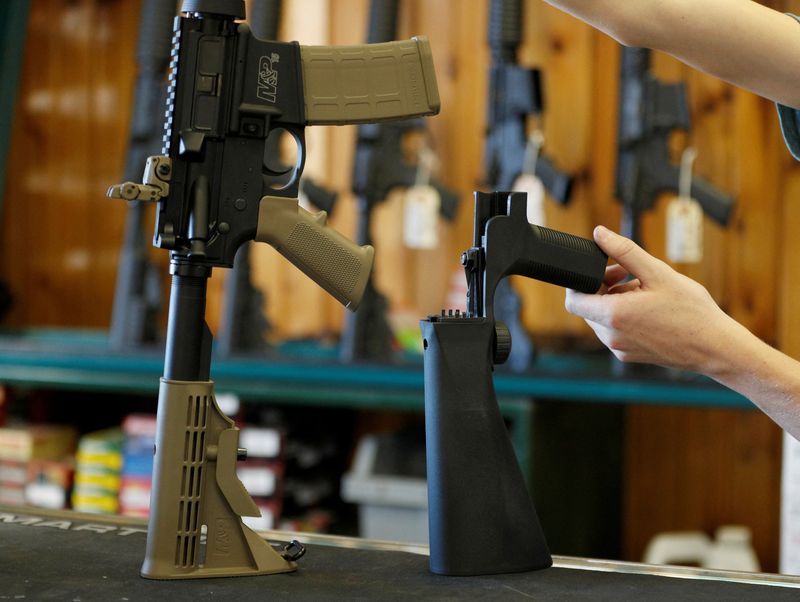