FORT MYERS, Fla. (Reuters) -U.S. President Joe Biden met with Florida Governor Ron DeSantis on Wednesday to assess the devastation from Hurricane Ian, and stressed the need for a united federal and state effort for the lengthy recovery ahead.

Biden, a Democrat, and DeSantis, his potential 2024 Republican presidential rival, have clashed over multiple issues including COVID-19 vaccines, abortion and LGBT rights.

They largely set those differences aside during the visit to hard-hit Fort Myers as Biden pledged federal support for a cleanup and rebuilding effort that could cost taxpayers billions of dollars and take years to complete.

Biden and DeSantis greeted each other warmly and stood shoulder to shoulder as they met with victims of the hurricane.

“Mr. President, welcome to Florida. We appreciate working together across various levels of government,” DeSantis, often a blistering critic of the president, told Biden during remarks after the tour.

“We’re in this together,” said Biden, who referred to DeSantis as ‘Guv,’ and complimented the “good job” the governor had done. “We’ve worked hand-in-glove. We have very different political philosophies.”

More than 100 people died and nearly 400,000 homes and businesses remained without power in Florida on Tuesday, five days after Hurricane Ian crashed across the state.

Biden opened his remarks by saying the storm showed climate change was real and needed to be addressed, something some in DeSantis’s Republican party have denied. “I think the one thing this has finally ended is a discussion about whether or not there’s climate change and we should do something about it,” he said.

The president also stressed the amount of federal help Florida receive for storm aid and as part of Democrat-backed spending, including $13 billion over the next five years for highways and bridges.

“The key here is building back better and stronger to withstand the next storm. We can’t build back to what it was before. You got to build back better, because we know more is coming,” he said.

Federal Emergency Management Agency Administrator Deanne Criswell said it would cost the federal government billions of dollars to repair the damage from the storm.

“We are still very much in the lifesaving and stabilization mode. They are just beginning the assessments of what the actual extent of damages to the infrastructure. It’s going to be in the billions,” Criswell told reporters on Air Force One.

Biden and Criswell also suggested Wednesday that Florida’s insurance industry, which faces tens of billions of dollars in losses for the storm, could come under increasing scrutiny.

Fort Myers Mayor Ray Murphy, who also manages commercial real estate, told Reuters he and Biden were having a friendly chat and “trying to encourage each other” in a colorful exchange picked up by a microphone.

“No one fucks with a Biden,” the president told Murphy, to which the mayor replied: “You’re goddamn right … That’s exactly right.”

Murphy, elected on a nonpartisan basis, said there was no mention of DeSantis in the brief conversation.

Biden visited Florida in July after a condominium complex collapsed and killed nearly 100 people, and stressed cooperation with DeSantis at the time.

But before Hurricane Ian hit, Biden had planned a rally in the political battleground state where Democratic officials expected the president to attack the governor.

On climate change, Biden has made reducing carbon emissions a focus of his presidency, while DeSantis backed funding to harden Florida’s defenses against flooding but also opposed some previous disaster-relief aid and pushed pension funds not to consider environmental impact when they invest. 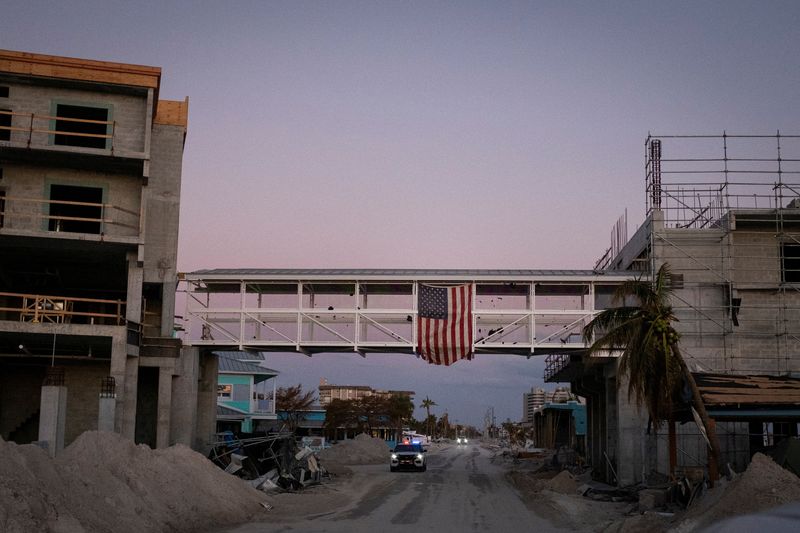 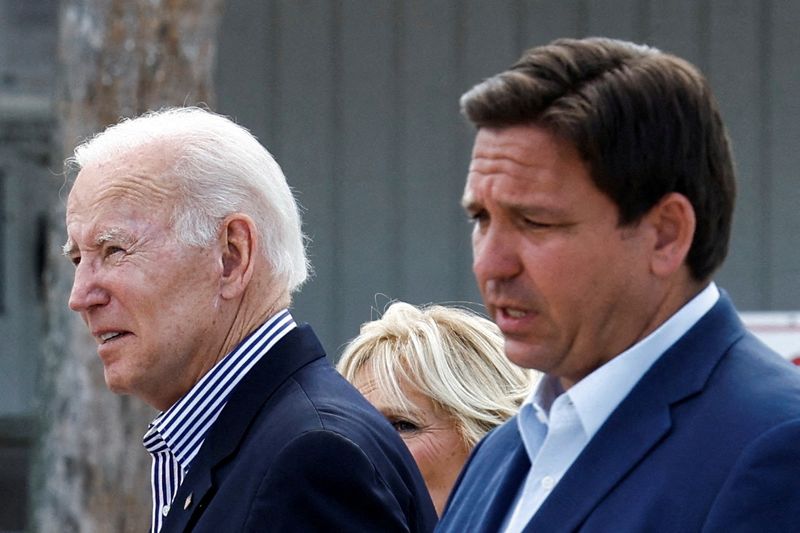 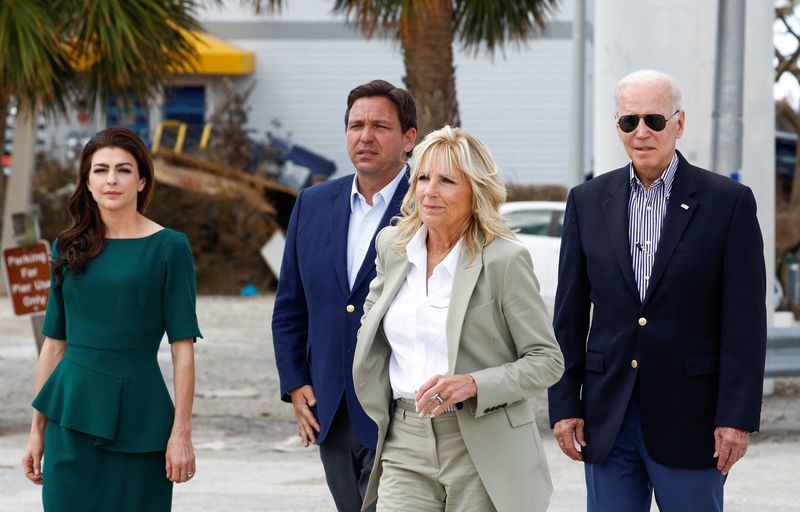 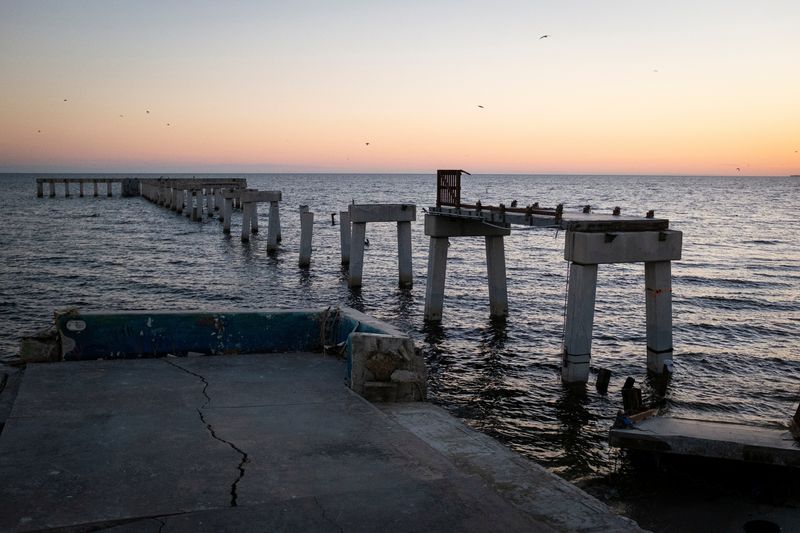 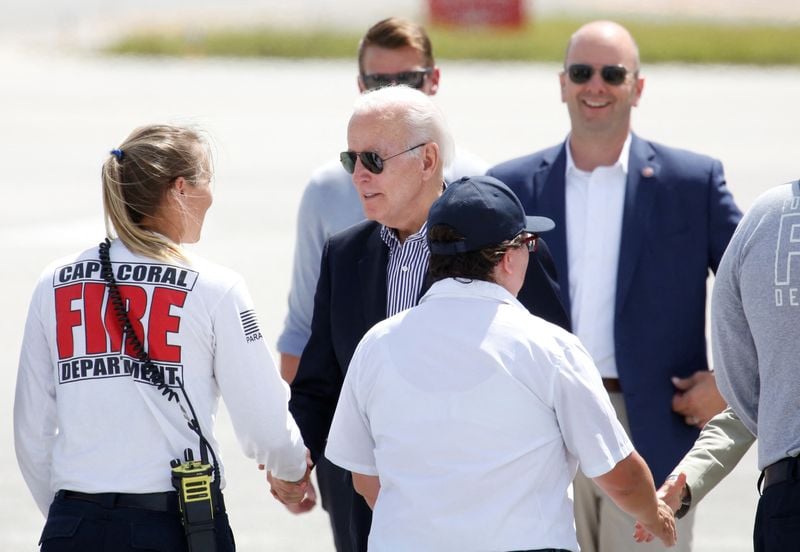 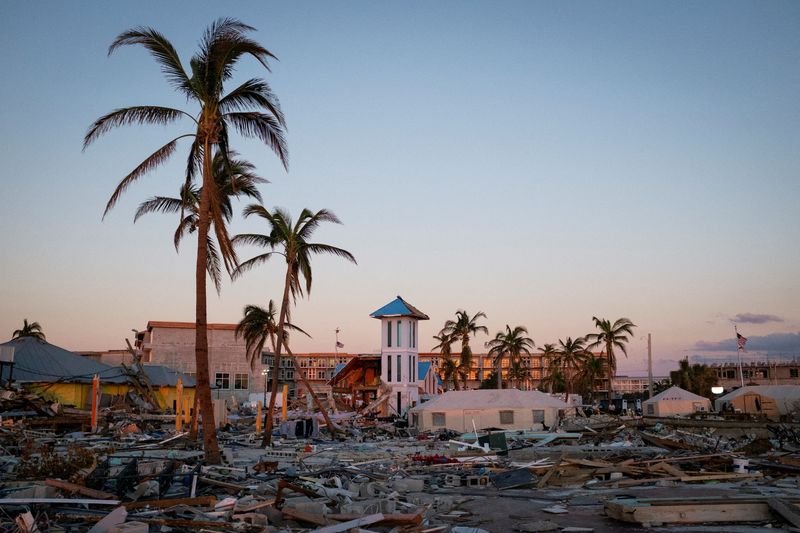 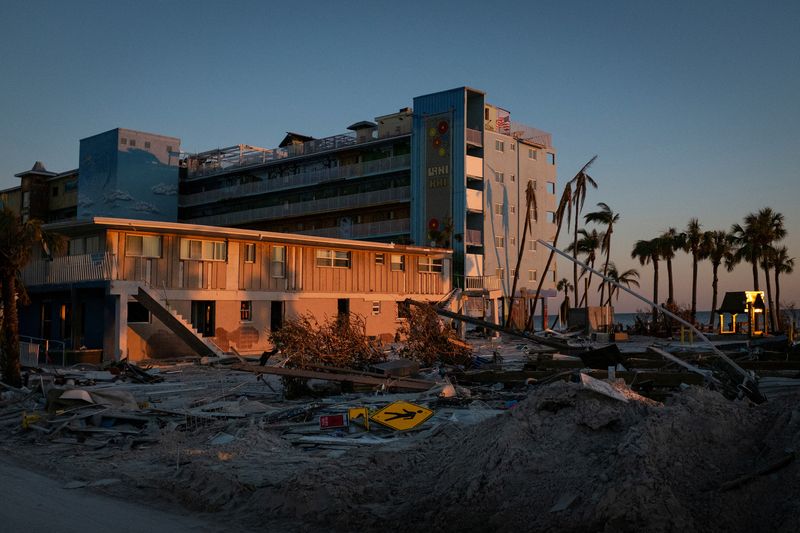