A record number of resignations among the company’s most experienced pilots leaves the airline unprepared to fully resume operations and failing to meet resurgent demand, the Hong Kong Aircrew Officers Association (HKAOA) said.

“Cathay Pacific … is currently facing unprecedented staffing and training shortages,” it said in a statement that forecast a rise in airfares amid a situation of low supply and strong demand.

Cathay, which plans to hire 4,000 more staff over the next 18 to 24 months as travel rebounds, said adding more flights was a priority but it would take time to train crew and reactivate aircraft.

“We remain focused on building connectivity between Hong Kong and the world as swiftly as we possibly can,” the airline said in a statement responding to the union comments.

Last month, Cathay said it expected to reach a third of pre-pandemic passenger capacity by year-end, exceeding its previous estimate of a quarter, after crew quarantine rules were eased.

In contrast, rival Singapore Airlines Ltd expects to reach 81% of its 2019 capacity levels by then.

Along with its subsidiaries, Cathay had 20,800 employees globally by June 30, down from 34,200 at the end of 2019, after cutting thousands of roles during the pandemic.

At a webinar on Wednesday, John Grant, chief analyst at travel data firm OAG, said Hong Kong was likely to eventually restore its status as a global aviation hub, given its proximity to mainland China, but the process would not be quick.

Capacity at Hong Kong airport this week is 81% below 2019 levels, versus a decline of 38% in Singapore and a fall of 22% in Sydney, OAG data showed.

At Cathay, pilot attrition has been higher than normal after more than two years of onerous quarantine norms, combined with permanent pay cuts of as much as 58%.

The airline said it believed its pay contracts were competitive, citing its ability to recruit and retain pilots as it rebuilt its schedule.

“We already recommenced recruiting locally based pilots in summer last year, including some 200 eligible, qualified pilots for Cathay Pacific, and altogether about 300 for the group’s airlines,” the company said.

Hundreds of Hong Kong-based pilots were put out of work in 2020 when Cathay closed its regional carrier, Cathay Dragon.

(Reporting by Jamie Freed in Sydney; Editing by Clarence Fernandez and Mark Potter) 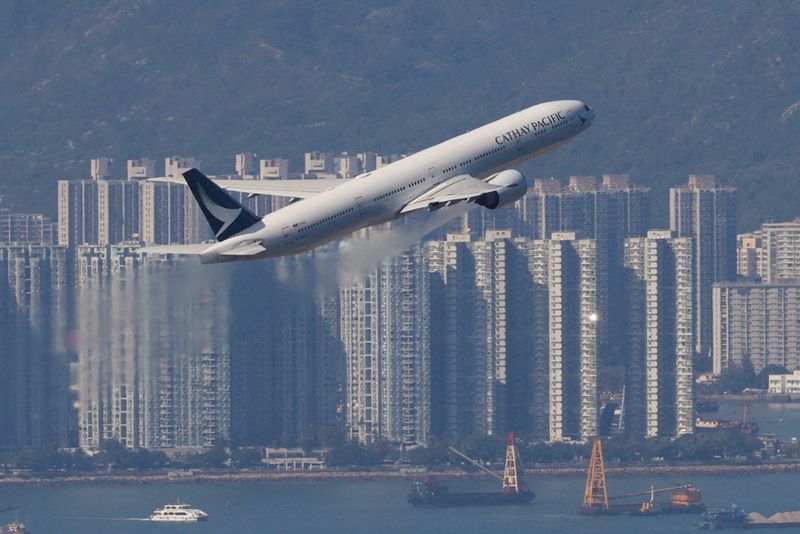