Nearly four weeks after Amini, a 22-year-old Iranian Kurd, was detained in Tehran for “inappropriate attire”, the protests show no sign of abating in a bold challenge to Iran’s clerical rulers, even if the unrest does not seem close to toppling them.

The unrest has underlined pent-up frustrations over freedoms and rights in Iran, with many women joining in. The deaths of several teenaged girls reportedly killed while demonstrating have becoming a rally cry for more protests.

Iran deployed members of the Basij militia, troops which have been at the forefront of repressing popular unrest for decades, in Kurdish areas where seven people were killed in protests overnight.

Videos on social media which Reuters could not verify showed what appeared to be Basij beating protesters in Kurdish areas.

Two sources in Sanandaj, capital of Kurdistan province, told Reuters that Basij members, along with riot police, were attacking demonstrators.

A witness told Reuters hundreds of riot police and Basij forces have been transferred from other provinces to Kurdistan to confront protesters.

“A few days ago some Basij members from Sanandaj and Baneh refused to follow orders and shoot the people,” said the witness.

“In Saqez the situation is the worst. Those Basiji forces just shoot at people, houses, even if there are no protesters.”

The witness said that people who were killed were pulled into homes so that their corpses didn’t remain in the streets.

Basij volunteers, affiliated to the elite Revolutionary Guards, may number in the millions, with 1 million active members, analysts say.

Activists on social media have called for protests on Friday in Khuzestan province, home to most of Iran’s Arabs.

Although the latest protests have persisted for weeks, the Iranian authorities have experience of quelling much longer bouts of unrest. In 2009, nationwide demonstrations that erupted over a disputed election lasted for about six months before finally being brought under control.

While many officials have struck an uncompromising tone, a top adviser to Supreme Leader Ayatollah Ali Khamenei has been cited as questioning whether police should be enforcing headscarf-wearing – rare criticism of state efforts to impose the hijab.

Human rights groups have reported more than 200 killed in the crackdown on the protests, which have been particularly intense in Kurdish regions where security forces have put down unrest by the Kurdish minority in the past.

Iran’s Kurds are part of an ethnic minority spread between several regional states whose autonomy aspirations have also led to conflicts with authorities in Iraq, Syria and Turkey.

In the Kurdish town of Marivan, a young protester said people were setting fires on streets every night to try and keep riot police from entering their neighbourhoods.

“They have no mercy, they just shoot randomly. Shops are closed. At night our city turns to a war zone. With people throwing stones and security forces shooting at them,” Marivan said.

With over 10 million Kurds living in Iran, Tehran fears pressure for secession will grow among a minority with a long history of struggle for its political rights.

Rights groups say Kurds, who form about 10% of the population, face discrimination along with other religious and ethnic minorities under Iran’s Shi’ite clerical establishment.

A source in Sanandaj told Reuters riot police were searching houses and arresting dozens of young people, describing the situation as very tense with hundreds of police officers on the city’s streets.

The person declined to be identified because of fears for their safety.

In the city of Kermanshah, direct fire from security forces killed two people, Hengaw said. It posted a picture of the body of an 18-year-old man it said was one of the dead.

A video posted on social media from Kermanshah late on Wednesday showed a fire burning in the road. “Kermanshah is hell, it’s war, it’s war,” a voice can be heard saying.

Three members of the security forces were also killed in Kermanshah and around 40 more injured, Hengaw said.

Officials have denied that security forces have fired on protesters and have previously reported around 20 members of the security forces killed during the nationwide unrest.

Reuters could not independently verify the videos and reports.

During the protests, many women have been publicly removing, waving and burning the headscarves they are required to wear under Iran’s conservative dress codes that led to Amini’s arrest.

Khamenei advisor Ali Larijani, a former parliament speaker, said “if 50% of our country’s women do not practice wearing a full hijab, then the police should not be involved”.

“The question here is this: Should the government interfere in all matters such as this one?” he told the Ettela’at daily. 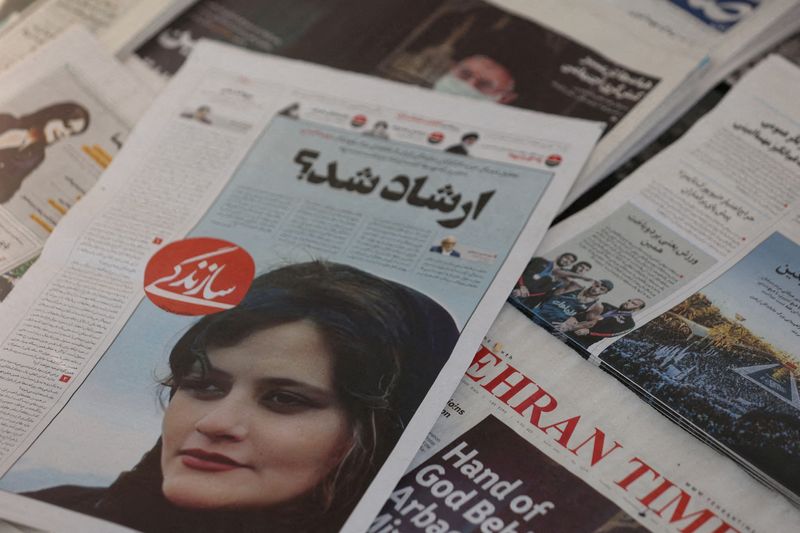 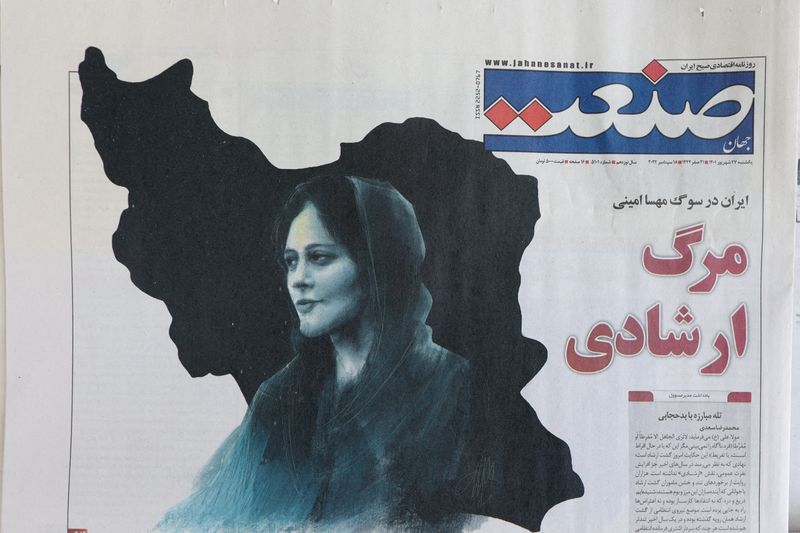