By Angelo Amante and Alvise Armellini

ROME (Reuters) -Giorgia Meloni, Italy’s first woman prime minister, vowed on Tuesday to steer the country through some of the hardest times since World War Two and to maintain support for Ukraine in its conflict with Russia.

Striking a combative tone in her maiden speech to parliament, Meloni said her conservative coalition would make its voice heard in Europe and disavowed fascism, despite her own party’s far-right roots.

Italy would continue to support Western sanctions against Russian President Vladimir Putin regardless of a squeeze on gas imports from Moscow, Meloni said during a wide-ranging speech that lasted more than an hour.

“Anyone who believes it is possible to trade Ukraine’s freedom for our peace of mind is mistaken,” Meloni said.

“Giving in to Putin’s blackmail on energy would not solve the problem, it would exacerbate it by opening the way to further demands and blackmail.”

The head of the nationalist Brothers of Italy, Meloni, 45, swept to victory last month as part of an electoral coalition that included Forza Italia, led by former Prime Minister Silvio Berlusconi, and Matteo Salvini’s anti-immigrant League.

The government is Italy’s most right-wing administration since World War Two and former close ties between Moscow and both Berlusconi and Salvini have raised concerns over its foreign policy.

Meloni later denied accusations from opposition lawmakers that she was anti-European, saying “you don’t necessarily have to be a federalist to believe in European integration”.

“(The European Union) has got involved in lots of things that should have been left to nation states … and has been absent on the big strategic questions,” she said.

Meloni said her government would offer financial support for families and firms hit by the energy crisis, warning that the high cost of this meant her administration might have to delay some of its more costly election promises.

“The context in which the government will have to act is very complicated, perhaps the most difficult since World War Two,” she said, adding that the economy could sink into recession next year as it battled rising inflation and disruption linked to the COVID-19 pandemic and Ukraine.

Meloni, who grew up in a working-class district of Rome, cast herself as an underdog ready to defy critics who have accused her of being an illiberal demagogue.

“I have never felt any sympathy or closeness to anti-democratic regimes. For no regimes, fascism included,” she said.

“In the same way, I have always considered the (anti-Semitic) racial laws of 1938 the lowest point of Italian history, a shame that will taint our people forever.”

On immigration, a key issue for her supporters, she said Italy would seek to stop people being smuggled across the Mediterranean and work with governments in Africa to help halt the migrant flows from the continent.

“Nobody must come to Italy illegally,” she said.

Meloni’s supporters gave her a standing ovation after her 70-minute speech, with some chanting: “Giorgia, Giorgia”.

The lower house subsequently approved the new government in a confidence motion by 235 votes to 154, with five abstentions. A similar ballot is expected in the upper house Senate on Wednesday, where Meloni also enjoys a clear majority. 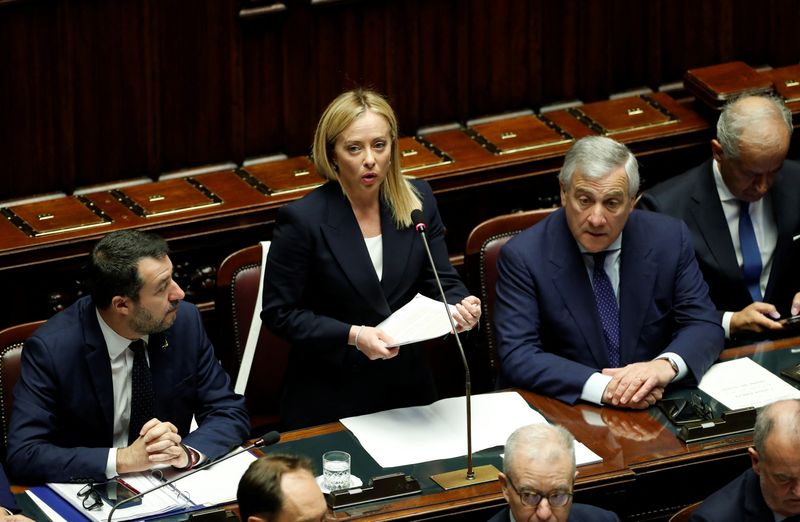 Sweden’s H&M to lay off 1,500 staff in drive to cut soaring costs and rescue profits