SEOUL (Reuters) -With “Hooker Hill” and snaking alleyways of bars with signs like “BADASS” around the local landmark Hamilton Hotel, Seoul’s Itaewon district was a symbol of freewheeling nightlife in the South Korean capital for decades, before tragedy struck.

The crush of partygoers on Saturday night that killed 153 mostly young people could hamper the revival of an area that was just starting to thrive after more than two years of COVID-19 restrictions, as trendy restaurants and shops replaced seedy establishments.

Lee Sang-yoon, who runs a pub in the alley next to the Hamilton where the disaster took place, said it may prove a devastating blow for even those who adapted to change.

“This happened right at the moment when we were about to rebound after being hammered by the pandemic,” said Lee, who has operated Itaewon businesses for three decades. “We could survive the pandemic because we owned this place, but most of our neighbours who had been paying rent here had closed their businesses and left.”

A short walk from the Yongsan U.S. army garrison, Itaewon sprang up after the 1950-53 Korean War as a hangout for American soldiers, with bars, brothels and fashion shops lining both sides of the main stretch running through it.

Itaewon went through decades of rises and falls.

A mysterious killing called the “Itaewon Murder” and other crimes in the late 1990s painted a dark image of the area. But early in this century it became a gourmet spot and place to experience world cultures without a passport.

The district has been a recurrent theme in popular culture, with a recent hit drama “Itaewon Class” and K-pop song “Itaewon Freedom”.

Restrictions placed on U.S. troops after the Sept. 11, 2001, attacks on the United States prompted a shift to a local clientele, a change accelerated by celebrities opening restaurants that became popular with young South Koreans.

Before 9/11, “Itaewon was full of Americans,” reminisced a 40-year resident who sells flowers on the street. Streets were just getting packed again for the first time since the pandemic, said the woman, who asked not to be named.

“Before COVID, more foreigners than locals, and now lots of local people come from rural areas,” she said. “I can’t believe this tragedy really happened. Holiday or, what’s it called, Halloween?

Early in the coronavirus pandemic, some of Itaewon’s gay bars and transgender clubs become a lighting rod for controversies, with dozens of cases traced to people who were faulted for not disclosing to health authorities that they had spent time there.

Park Geun-ho, owner of the Havana Lounge & Pub, worried the disaster may prove to be greater challenge than anything the area has seen.

“After all this, would people come to Itaewon now? They won’t,” said Park, who has run businesses in the district for nearly 30 years.

Before disaster struck, Halloween festivities had been the leading attraction for years, drawing local people and foreigners to the foothills of the Namsan mountain, just steps from luxury villas occupied by foreign diplomats and heads of chaebol business syndicates, including the late chairman of Samsung Group.

But questions have grown in recent years about the safety of hosting an event that draws up to 100,000 to the cramped and hilly streets, especially without shutting down the main street to traffic to accommodate pop-up stores and kiosks.

“This month should’ve been a good one with the Global Village Festival, Halloween and so forth, but then this accident happened,” said Kim Kyung-mo who works at a convenience store near the alley where the crush happened.

“I bumped into my boss earlier today and chatted briefly, and he obviously didn’t look really good.” 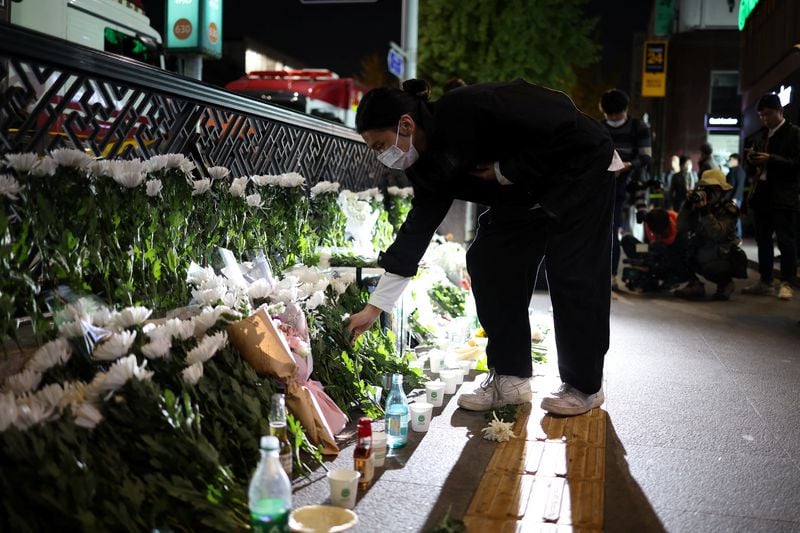