SYDNEY (Reuters) -Australian wages boasted the largest rise in a decade last quarter as a super-tight labour market finally made itself felt, though pay still lags far behind inflation in a squeeze on real incomes.

Figures from the Australian Bureau of Statistics out on Wednesday showed its wage price index rose 1.0% in the September quarter from the previous quarter, topping forecasts of a 0.9% increase and the largest gain since early 2012.

Annual pay picked up to 3.1%, from 2.6%, the fastest pace since 2013 but well below consumer price growth of 7.3% and not yet an inflationary threat of its own.

The Reserve Bank of Australia (RBA) has aggressively tightened policy to try and restrain inflation, lifting rates by 275 basis points since May to a nine-year high of 2.85%.

So far, the central bank has been content with the rise in wages noting growth was well below the 5%-plus rates seen in the United States and Britain.

However, it is wary that high inflation could turn into a damaging wage-price spiral and could become concerned if pay claims rose too quickly. Currently, it expects wage growth to plateaux around 3.9% late next year and into 2024.

Markets are wagering the RBA will lift rates again in December to 3.10% and ultimately peak around 3.85%.

The acceleration in wages in the third quarter was partly due to a sharp 4.7% increase in the minimum wage, which was itself awarded as a buffer against inflation.

Another, even larger, rise for aged care workers is set to lift wages in the first quarter of next year.

The private sector led the way in the September quarter with a rise of 1.2%, double that of the public sector. That lifted annual growth in private firms to 3.4%, while public jobs lagged at just 2.4% amid government controls on pay.

Business surveys have pointed to faster rates for many recent pay deals, especially including bonuses, but Australia’s system of awards across sectors that last two to three years means there is a lot of inertia in the system.

Yet with unemployment near 50-year lows at 3.5% and a vacancy for every person unemployed, analysts assume wages have to pick up in coming months.

The ABS noted nearly half of private sector jobs recorded a change in their hourly wage rate this quarter, compared to around one third in the same quarter last year.

The average size of wage increase for those jobs where wages moved was 4.3%, up from 2.9% a year before. 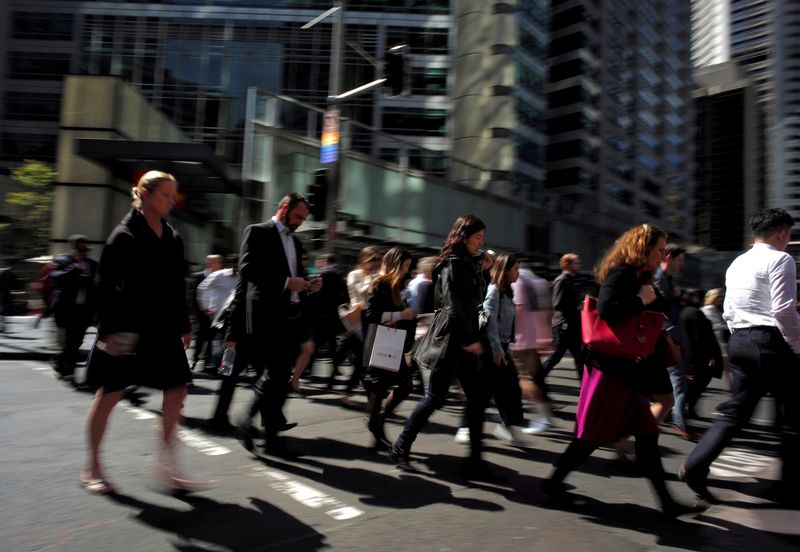