Wall St’s so-called ‘fear index’ of implied equity volatility fell on Tuesday to its lowest level since August. At just 21, the index is below the median of the past 12 months and is almost half the peaks hit earlier in the year.

Put against the deepening inversion of the U.S. 2-10 year Treasury yield curve to its most negative in 22 years, typically a harbinger of recession ahead, the apparent stock market calm is puzzling. And it’s not just the United States, Germany’s equivalent yield curve inversion hit its deepest since 2008.

Some analysts reckon stock market positioning is already so low and portfolios so underweight equity that demand for downside protection in the options market has waned too.

Others feel the oncoming recession will just ease energy and inflation pressures, hasten an end to central bank tightening and see a retreat in long-term borrrowing costs that have dogged stock markets all year.

A readout from the Federal Reserve’s last policy meeting later on Wednesday will be watched for clues on that.

Flash readings of European business sentiment in November showed at least some of the gloom lifting, however, with activity shrinking less rapidly than forecast. Surveyed German firms indicated that the deep contraction there had eased as price pressures fell back.

U.S. business surveys are due later.

China stocks perked up after China’s Bank of Communications agreed to provide a 100-billion-yuan credit line to developer Vanke – the latest sign of support for the embattled property sector.

But the COVID outbreak and its fallout only got worse.

Any hoping for an end to the jump in interest rate rate rises around the world were also disappointed.

New Zealand’s central bank hiked rates by a record 75 basis points and warned the economy might have to spend an entire year in recession to bring sky-high inflation under control.

Sterling was firmer as the top UK court ruled that Scotland’s government cannot hold a second referendum on independence without approval from Britain’s parliament, dealing a hammer blow to nationalists’ hopes of a vote next year.

Banking stress returned to the headlines.

Credit Suisse fell 4% after the embattled Swiss bank said it expects to make a pre tax loss of up to 1.5 billion Swiss francs ($1.58 billion) during its fourth quarter as it prepares to ask shareholders to clear a $4 billion equity hike.

The world of sports finance was brighter. Manchester United shares jumped almost 15% on Tuesday after it said it was seeking new investment or a potential sale 17 years after the American Glazer family bought the English Premier League soccer club.

Key developments that may provide direction to U.S. markets later on Wednesday: 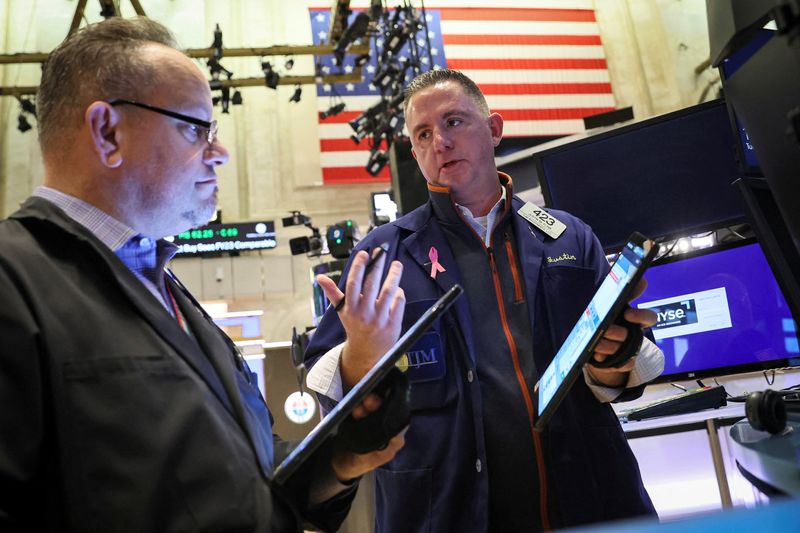