By Susan Mathew and Devik Jain

The pan-European STOXX 600 index climbed 0.9% to hit its highest since Aug 17. It gained 6.8% in November to log its best month since July.

Tech shares also were buoyed by a drop in euro zone yields, following U.S. Treasuries, after Powell on Wednesday said the Fed could slow its pace of policy tightening as soon as its December meeting, while an indicator tracked by the Fed showed signs of inflation moderating.

Energy stocks slumped 0.9%, capping gains for the broader index, after rising for two consecutive sessions on optimism about demand outlook from China. [O/R]

Lifting risk appetite, China was set to announce in the coming days an easing in COVID-19 protocols, after anger over the world’s toughest curbs fuelled protests across the country.

China’s stringent measures have contributed to slowing global growth, while aggressive policy tightening and an energy crisis in Europe have also fuelled worries over a recession.

“European markets are indeed incorporating the speech from Powell that was well-received by markets already elsewhere. That is a main driver of what we’re currently seeing,” said Bert Colijn, senior economist, eurozone at ING.

“At the same time, if we see that (COVID) measures in China are becoming more lenient, then that would be a good sign for global economic activity.”

These developments fuel optimism that followed after data showed a smaller-than-expected rise in euro zone inflation on Wednesday, which raised the prospect of a less-aggressive monetary policy tightening by the European Central Bank.

Meanwhile, a downturn in manufacturing activity across the euro zone eased in November, according to a survey which suggested that while the bloc’s factories still face a harsh winter, it may not be as bad as initially feared.

UCB slid 6.6% after J.P.Morgan cut its price target on the Belgian drugmaker’s stock.

Credit Suisse dipped 4.4% to hit a fresh record low. Reuters reported the Swiss lender is looking for ways to accelerate cost cuts announced just weeks ago as client outflows and a slowdown in activity weigh on its revenue outlook

(Reporting by Susan Mathew and Devik Jain in Bengaluru; Editing by Sherry Jacob-Phillips and Bernadette Baum) 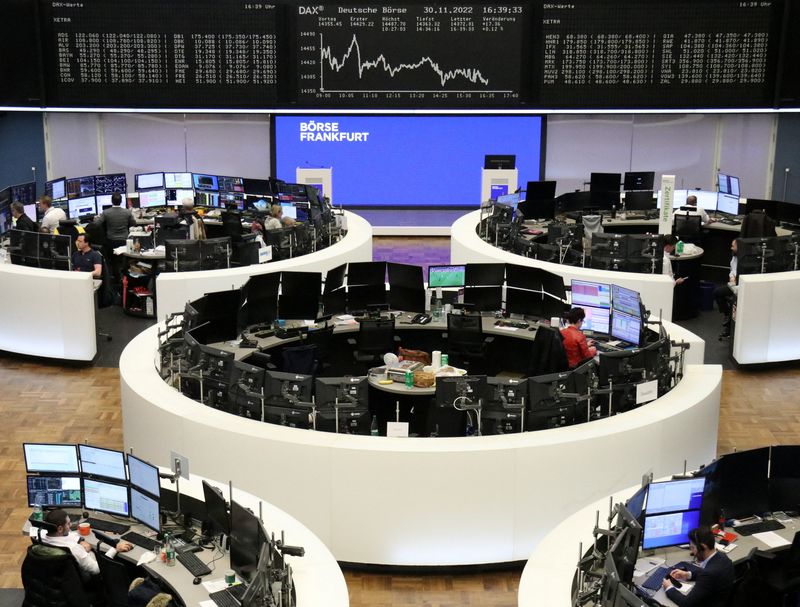