By Tom Hals and Jonathan Stempel

(Reuters) -Conspiracy theorist Alex Jones filed for bankruptcy on Friday, after he and the parent of his Infowars website were ordered to pay about $1.5 billion for spreading lies about the 2012 Sandy Hook mass shooting.

Jones filed for Chapter 11 protection from creditors with the U.S. bankruptcy court in Houston, a court filing showed.

Jones claimed for years that the 2012 killing of 20 students and six staff members at Sandy Hook Elementary School in Newtown, Connecticut, was staged with actors as part of a government plot to seize Americans’ guns. He has since acknowledged the shooting occurred, but plaintiffs said Jones cashed in for years off his lies about the massacre.

“Like every other cowardly move Alex Jones has made, this bankruptcy will not work,” said Chris Mattei, an attorney representing Sandy Hook families. “The American judicial system will hold Alex Jones accountable, and we will never stop working to enforce the jury’s verdict.”

Mattei said Jones had engaged in intentional and egregious attacks and the bankruptcy system would not protect him.

A lawyer for Jones did not immediately return a request for comment.

In October, a Connecticut jury said Jones and Free Speech Systems, the parent company of Infowars, should pay nearly $1 billion in damages to numerous families of victims of the Sandy Hook shooting.

The trial was marked by weeks of anguished testimony from the families, who recounted how Jones’s lies about Sandy Hook compounded their grief.

In a separate case in Texas, a jury in August decided Jones must pay the parents of a 6-year-old boy killed in the Sandy Hook massacre $45.2 million in punitive damages, on top of $4.1 million in compensatory damages.

Related News:   US, Ukraine Clash Over War Strategy As Russia Makes Gains In The East

Jones’s lawyers have said he would appeal the Connecticut and Texas verdicts.

Bankruptcy can be used to wipe out debts, but not if they result from “willful or malicious injury” caused by the debtor. Jones’s lies appear to meet that standard, said Susan Block-Lieb, a professor of bankruptcy law at Fordham University School of Law.

The filing also comes with risk for Jones, who will have to disclose all of his assets in court, said bankruptcy lawyer Sidney Scheinberg.

“Now that he’s filed for bankruptcy, his assets are an open book,” Scheinberg said. “If you hide assets in a bankruptcy case, that’s a federal crime.”

An economist in the Texas case estimated that Jones is personally worth between $135 million and $270 million.

The bankruptcy filing lists the plaintiffs who won verdicts against Jones as his largest unsecured creditors.

Among them are Robert Parker, father of six-year-old Emilie Parker, who was awarded $120 million by the Connecticut jury, and FBI agent William Aldenberg, who was among the first law enforcement officers on the scene of the 2012 shooting.

Connecticut judge Barbara Bellis had temporarily blocked Jones from moving any personal assets out of the country at the request of the plaintiffs, who claimed Jones was trying to hide assets to avoid paying.

The families have sued Jones in Texas state court seeking to unwind what they say are millions of dollars worth of illegitimate transfers from Jones’s company to shell entities he controls. They allege those transactions were intended to shield Jones’s assets from potential judgments. 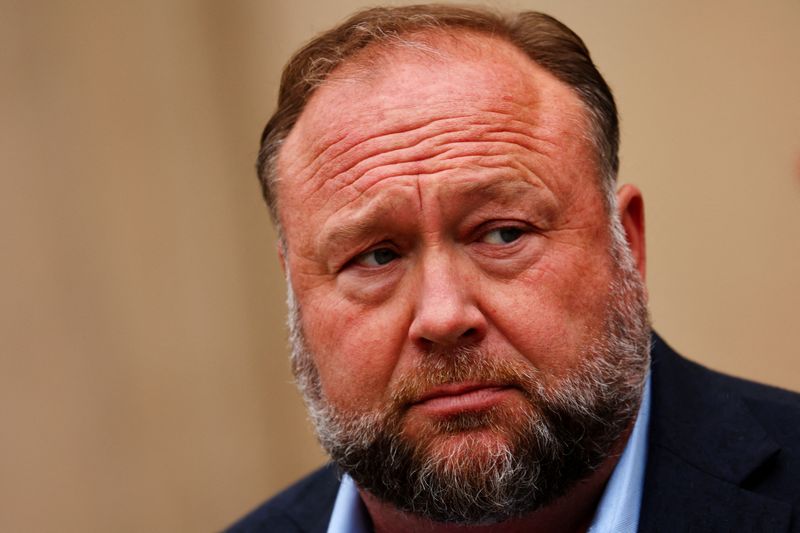