By Humeyra Pamuk and Patricia Zengerle

Amid the celebrations following Griner’s return some critics, including members of Congress and federal law enforcement, argued such trades only encourage foreign states to target Americans to gain leverage over the United States.

Families of those detained abroad reject that argument, saying there is no hard evidence to support that and that the U.S. government should focus on deterring and punishing governments which wrongfully detain or imprison U.S. citizens.

The plight of American detainees abroad gained visibility after Griner’s arrest in February and as families stepped up their publicity efforts, concluding that years of quiet diplomacy did little to bring back their loved ones.

The details of Griner’s release highlight the painful trade-offs confronting the Biden administration. After months of negotiations — which U.S. officials had hoped would bring home both Griner and Paul Whelan, a former U.S. Marine Moscow accuses of spying — Russia was only willing to release Griner.

That trade meant a prison release for Viktor Bout, a Russian citizen U.S. authorities have called one of the world’s top illegal arms dealers and who was captured after a global manhunt.

“The Russians and other regimes that take American citizens hostage cannot pretend that there is equivalence between the Brittney Griners of the world and people like Viktor Bout, the so-called ‘Merchant of Death,'” said Senator Bob Menendez, Democratic chairman of the Senate Foreign Relations Committee.

“We must stop inviting dictatorial and rogue regimes to use Americans overseas as bargaining chips.”

DETENTIONS ON THE RISE

The detention of Americans overseas is not new. From the Soviet Union’s capture of U-2 pilot Francis Gary Powers in the 1960s to the Iran hostage crisis of the 1970s and the more recent imprisonment of U.S. citizens in North Korea, Iran and China, administrations have wrestled with the question of whether and when to negotiate.

The problem has become acute, with some governments seemingly using arbitrary detention as a negotiating tactic. In one such case in 2016, North Korea detained American college student Otto Warmbier during a dispute with the international community over that country’s missile launches. Warmbier died just days after his return.

At the same time, U.S. detainees’ friends and families are wielding public pressure on the administration. Brittney Griner’s February arrest in Moscow on charges of possessing vape cartridges containing cannabis oil triggered a surge of support from fans, celebrities and politicians calling for her release and criticizing the Biden administration for not doing more.

Many of the families argue that the U.S. should be willing negotiate and discount the argument that prisoner swaps lead more countries to grab Americans.

“I’m not aware of any concrete evidence that this will encourage more hostage-taking,” said Harrison Li, son of Chinese-American Kai Li, detained by China since 2016. “And I think the important thing to emphasize is the executive order that President Biden put out, which is very clear in providing for proactive, punitive measures that can be placed on these countries.”

Biden in July signed an executive order authorizing U.S. government agencies to impose financial sanctions and other measures on those involved in the wrongful detention of Americans.

Families say they haven’t seen forceful implementation of the order.

The United States does not provide an official figure for how many U.S. citizens are held abroad, but the James W. Foley Legacy Foundation, named after an American journalist abducted and killed in Syria, says that more than 60 U.S. citizens are wrongfully detained in about 18 countries.

Beyond the question of whether prisoner swaps incentivize detentions, the administration also faces criticism from law enforcement, where some question the wisdom of trading high-profile convicts like Bout.

“I’ve spoken to a great number of people throughout the Department of Justice at every level. They’re frustrated, they’re disappointed, they’re disenfranchised.”

The administration acknowledges the difficulties.

“Negotiations for release of wrongful detainees are often very difficult — that’s just a reality — in part because of the price that must be paid to bring Americans home to their loved ones and in part because the immediate results can feel unfair or arbitrary,” White House spokesperson Karine Jean-Pierre said after the news of Griner’s release.

Those hard choices meant Washington could either leave Whelan in Russian custody or else return empty-handed after months of negotiations. Whelan’s family called the situation “a catastrophe.”

“Where are all these people with their other solutions on how we get Americans back?” asked Elizabeth Whelan, sister of Paul Whelan. “What’s the alternative? Yes it’s terrible to send someone like Viktor Bout back, for sure, but it means we get Americans home.” 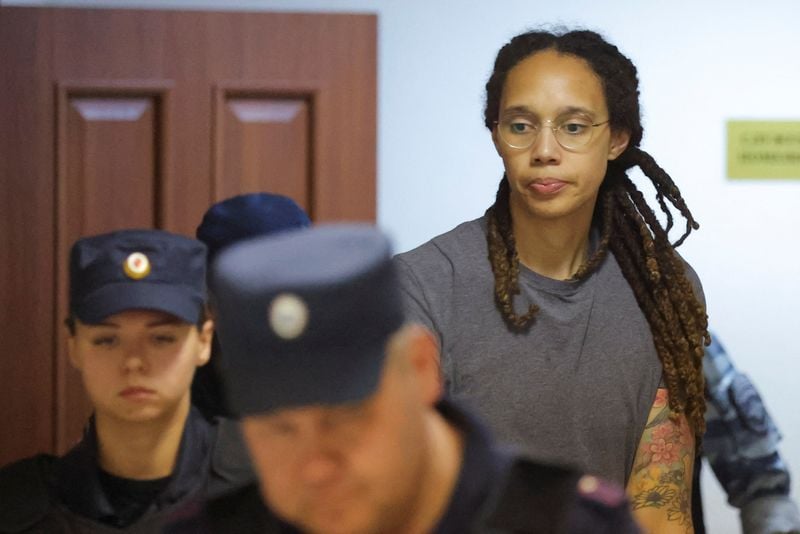