STAFFORD COUNTY, VA – The Stafford County Police Department arrested a suspect who attempted to elude police in a stolen vehicle.  After crashing the vehicle, the suspect fled, leading police on a foot chase.

According to the Stafford Police Department, on February 10 at 1:10 a.m., Sergeant A.I. Assur observed a vehicle speeding on southbound I-95.

Assur noted the vehicle did not have a license plate displayed.

“Sergeant Assur activated his vehicle’s emergency equipment to conduct a traffic stop at mile marker 139. The suspect vehicle accelerated and began driving at a high-rate of speed,” the department said. “Sergeant Assur pursued the vehicle as it attempted to exit I-95 at the Centreport Parkway exit. The suspect vehicle was unable to maneuver the ramp and crashed through the guardrail and into a light pole. When the vehicle came to a stop, the driver and passengers fled on foot across Centreport Parkway towards Enon Road.”

Police say a search then began for the suspects.

“A K9 unit from the Fredericksburg Police Department responded to assist,” the department said in a statement. “The K9 began a track which eventually led to the back of a residence on Beauregard Street where the K9 alerted to a shed.”

Deputies found the suspect, Wadah Mahgoud, 20, of Fredericksburg, shoeless inside the shed. Mahgoud was taken into custody without incident. 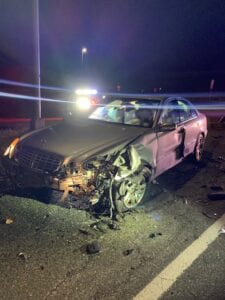 It was discovered the suspect vehicle was reported stolen out of Fairfax County. Deputies also learned Mahgoud was wanted out of Fredericksburg. Mahgoud was reunited with his shoes, which were found in the floorboard of the driver’s seat, and he was transported to the Rappahannock Regional Jail. He was charged with possession of a stolen vehicle, eluding, reckless driving, hit and run, and driving without a license. He was also served the outstanding warrant. Mahgoud was held without bond. The investigation is ongoing.