By Paul Carrel and Madeline Chambers

BERLIN -German Chancellor Olaf Scholz said on Wednesday his government would make Europe’s largest economy fit for the future by fostering investment in climate protection and digitalization, vowing no one would be left behind in this major transformation.

The Social Democrat’s first major address to parliament since replacing conservative leader Angela Merkel last week focused largely on domestic issues, emphasizing the immediate need to tackle the pandemic and the longer-term task of modernizing both the economy and society.

Yet the 63-year old, who has paid visits to Paris, Brussels and Warsaw since taking office, also underscored the importance of strengthening the European Union and standing shoulder-to-shoulder with transatlantic allies in the face of security threats like the Russian military build-up in Ukraine.

“We have about 23 years ahead of us in which we must and will get out of fossil fuels which means the biggest transformation of our industry and economy in at least 100 years,” said Germany’s new chancellor.

Scholz served as vice chancellor and finance minister in coalition with Merkel over the past four years. But he has vowed his unprecedented three-way coalition with the ecological Greens and liberal Free Democrats would be a “restart”.

Germany needed to double renewable energy production by 2030 but also to expand infrastructure like charging stations for electric vehicles, he said.

His government would create the framework for most of the investment in Germany’s future to be private, for example expanding the state bank’s role in supporting start-ups.

Such a transformation could only work if there was social cohesion, Scholz said, highlighting plans to raise the minimum wage and make society more inclusive, for example through self-identification for transgender people and the liberalization of citizenship laws.

“We are an immigration country … but we must work at becoming a better country for integration,” he said, adding that his government aimed to make it easier for foreigners to come work in Germany.

Opposition lawmakers on both sides of the political spectrum focused their criticism of the new government on its proposals to fund public investments by taking on billions of euros in extra debt. Those on the far-left criticized it for not raising taxes on the wealthy and those on the right accused it of unsustainable financial policy.

Running at just under 70% of GDP, Germany’s debt ratio is far smaller than that of France, on 115%, or the United States, on more than 160%, but Scholz has nonetheless faced criticism over his government’s budget plans.

The opposition conservatives said on Tuesday they would file a complaint with the constitutional court about the new government’s plans to tap unused debt from this year’s budget for future spending on climate and economic transformation.

Scholz said his immediate priority would be tackling the pandemic, warning there would be “no red lines” for his government in fighting Germany’s fourth wave and imploring citizens to get vaccinated.

He touched on foreign policy an hour into his speech, saying the success of the European Union was a top priority for Germany and his government would work to strengthen the bloc. One aim was to see qualified majority voting at the European Council expanded.

Scholz, who is due to attend his first EU summit as chancellor on Thursday, has big shoes to fill after Merkel helped navigate the bloc through multiple crises during her 16 years in office.

The two leaders share a down-to-earth, conciliatory manner and a calm rather than charismatic attitude – qualities on display in his sober speech on Wednesday in which he thanked Merkel for her handover that was, he said, a global lesson in citizenship.

On Europe’s most immediate crisis, Scholz reiterated warnings that any violation of Ukraine’s territorial integrity by Russia would have a high price although Berlin still wanted a dialogue with Moscow.

“We will speak with one voice here with our European partners and our transatlantic allies,” he said. 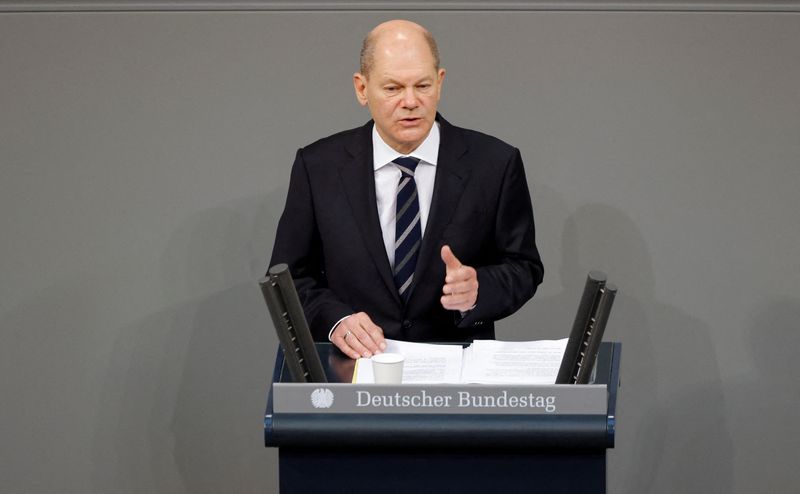