By Ebru Tuncay and Nevzat Devranoglu

ISTANBUL – Tayyip Erdogan’s plan to defend lira deposits has given Turkish savers some respite as well as possibly laying the ground for an early election by the President, but it risks piling up debt and stoking already rife inflation.

Erdogan, Turkey’s leader of nearly two decades, has been pushing ahead with a “new economic model” he says will boost jobs, growth, exports and deliver cheap credit but has been hit in the ratings by a damaging drop in the lira.

Central to Erdogan’s promise on Monday was an effective tax-free guarantee, backed by the Treasury, that Turks would be made good on the difference between what they earn on their deposits through interest rates and any adverse exchange rate move, encouraging savers to sell dollars and buy lira.

For some, his latest policy move, with short-term gains and potential longer-term pain, is a signal that Erdogan may intend to hold an election within months, well ahead of presidential and parliamentary elections which are scheduled for mid-2023.

“I expect a snap election. What has been done in the economy so far is an election strategy,” said Ozer Sencar, president of Turkish polling group MetroPoll.

Analysts have interpreted recent moves as a last-ditch attempt by the president and his AK Party to shore up their socially conservative, working and lower middle class voter base, and to return to his past record of economic growth.

But Erdogan’s government could be left on the hook to cover future losses based on the exchange rate, analysts and bankers said after the lira’s rapid rally on Tuesday, which they said could yet fizzle out and reverse.

The latest pledge amounts to a turnaround for the 67-year-old, who has staked his new economic programme on slashing rates and rejecting the concept of interest. But Turkey’s public finances are strong compared to other emerging market countries, leaving it room to provide support.

Erdogan made his announcement just hours after the lira breached 18 to the dollar for the first time ever on Monday, with a series of steps he said would reverse a tidal wave of depositors shifting lira deposits into dollars.

Were the new measures to cover it all and if the exchange rate rises 20% faster than Turkey’s central bank deposit rate, this would amount to a 240 billion lira hit to Ankara’s budget, Hursit Gunes, an economist at Marmara University, estimated.

While questions such as how and when the Treasury will pay and how to account for the tax relief remain, for depositors the new policy delivered much needed protection from erosion.

Bankers told Reuters they had therefore converted up to $1.5 billion in savings on Monday night alone, driving the lira’s biggest rally on record in volatile trading. [USN LINK]

“If you expect the exchange rate to double, which happened (in the last two months), then the return on lira deposits is 100% for you,” Refet Gurkaynak, head of Bilkent University’s economics department in Ankara, said.

“But it can have dangerous consequences,” he added.

Turkish banks already pay 16-18% rates on deposits and are unlikely to offer much more given the policy interest rate is 14% after an aggressive and unorthodox monetary easing cycle.

Under pressure from Erdogan, Turkey’s central bank has cut rates by 500 basis points since September, setting off the worst lira crisis in two decades on fears of an inflationary spiral.

Annual inflation breached 21% last month and is expected to soar beyond 30% next year due largely to the currency crash, which stokes import prices. Food and other basic goods are higher still, rattling already stretched households.

Any further currency depreciation could theoretically mean limitless new debt being issued by the Treasury. The government could then turn to the central bank to monetize this, creating another inflationary wave, bankers and analysts said.

“There is no free lunch for the lira. The cost of the support measures will come through to corporates ultimately in the form of higher borrowing costs or higher taxes,” Dubai-based Hasnain Malik, head of equity research at Tellimer, said.

“There is no escape from re-establishing a credible interest rate policy environment,” he added.

While a government source with knowledge of the matter acknowledged the budget burden and inflation could rise, they said “these can be managed”, adding: “All of the decisions announced include protections against risks”.

Cemil Ertem, a presidential adviser and member of the government’s Economic Policies Committee, told Reuters the deposit guarantee was a “historic change” that removes individuals’ need for dollars to protect against inflation.

But a senior banker said the new policy will only work well if the economy maintains a current account surplus, and the government still needs to explain some details despite a rough outline from the Treasury on Tuesday.

Turkey’s budget deficit is projected to be about 3.5% of GDP for this year, up from 1.5% earlier in the year. 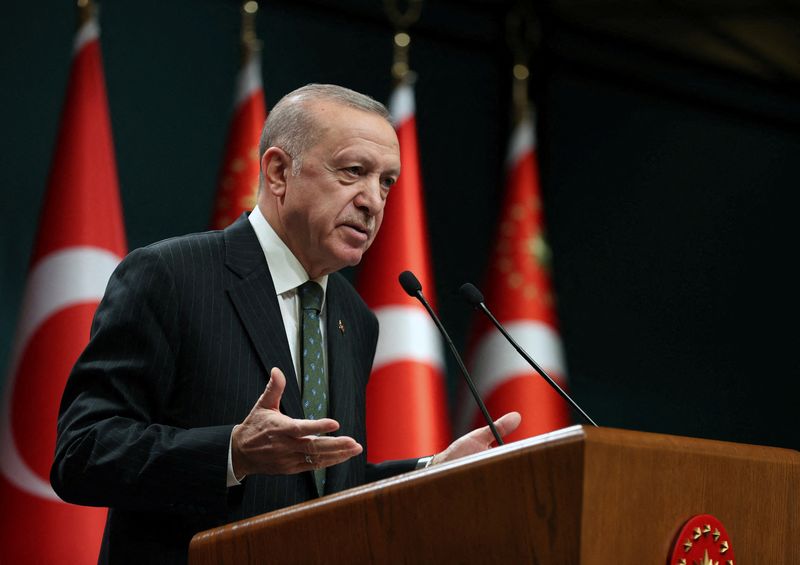