The league said he died “unexpectedly” but did not provide further details.

Madden, inducted into the Pro Football Hall of Fame in 2006, brought unbridled enthusiasm and a sense of fun to NFL games during a three-decade broadcasting career. He was the master of onomatopoeia, using terms like “boom,” “whap” and “doink” to explain football plays to viewers.

The son of an auto mechanic, Madden appealed to fans as an exponent of America’s most popular sports league – and as a advertising pitchman for such varied products as beer, hardware stores and foot fungus medicine.

His “Madden NFL,” sold by EA Sports, became one of the best-selling sports video games of all time. Launched in 1988 and sold for decades, the game carried his name and he helped make it as realistic as possible.

The video game’s popularity gave rise to its own legend: The “Madden Curse” held that the NFL star shown on the game’s cover might suffer an injury or a precipitous drop in productivity.

Breaking News
‘Not Just Women That Are Getting Pregnant’: Abortion Activists Sound Off At ‘Bans Off Our Bodies’ March

Before becoming a TV commentator, Madden served as head coach of the Raiders from 1969 to 1978. In those days, the Raiders were considered the NFL’s outlaws, with outrageous, rebellious players, an excitable, arm-flailing coach and an owner, Al Davis, whose motto said it all: “Just Win, Baby.”


The highlight of his coaching career was a 32-14 stomping of the Minnesota Vikings in Super Bowl XI on Jan. 9, 1977.

An indelible image came moments after the game ended when the Raiders players hoisted the coach to their shoulders and carried him off the field in victory, with Madden flashing a huge smile with his right hand thrust toward the sky.

Madden won numerous Emmy awards during his broadcasting career and was recognized as one of the best color announcers ever to call NFL games. He possessed an uncanny ability to explain the intricacies of the game in an entertaining way that satisfied hard-core fans and football neophytes alike.

Madden became one of the highest-paid sports announcers. During his career, he called games for all the major U.S. broadcast TV networks. He retired as an announcer in 2009 after working Super Bowl XLIII.

“My dad worked hard. He was a mechanic,” Madden said in his Hall of Fame induction speech in 2006. “… I have never worked a day in my life. I went from player to coach to a broadcaster, and I am the luckiest guy in the world.”

“I don’t think there’s anybody who has made the NFL more interesting, more relevant, and has educated more people about football than John Madden,” Al Michaels, his long-time on-the-air partner, told the New York Times in 2008.

Madden was known for certain idiosyncrasies. He developed a fear of flying after his coaching career and traveled to games as a broadcaster by bus – but not just any bus.


Madden was born on April 10, 1936, in Minnesota and grew up in northern California. After playing college football at Cal Poly, he was drafted by the NFL’s Philadelphia Eagles in 1958, but sustained a career-ending knee injury during training camp.

Breaking News
FROM SOLAR GRID TO CATTLE SHED: How Greenpeace’s Dream Of A Solar-Powered Village Fell Apart In Just A Few Years

He turned to coaching and his success as San Diego State’s head coach drew the notice of the Raiders, who hired him as assistant coach. He became one of youngest head coaches in pro football when the Raiders handed him the job at age 32.

The Raiders never had a losing season and made the playoffs eight times under Madden, whose .759 regular-season winning percentage (103 wins, 32 losses, seven ties) stood as the best for an NFL coach with at least 100 career victories. He retired after the 1978 season due to a stomach ulcer and fatigue.

“Nobody loved football more than Coach. He was football,” NFL Commissioner Roger Goodell said in a statement Tuesday. “There will never be another John Madden, and we will forever be indebted to him for all he did to make football and the NFL what it is today.”

Madden married wife Virginia in 1959. They had two sons.

(Reporting and writing by Will Dunham; Additional reporting by Amy Tennery; Editing by Bill Trott and Stephen Coates) 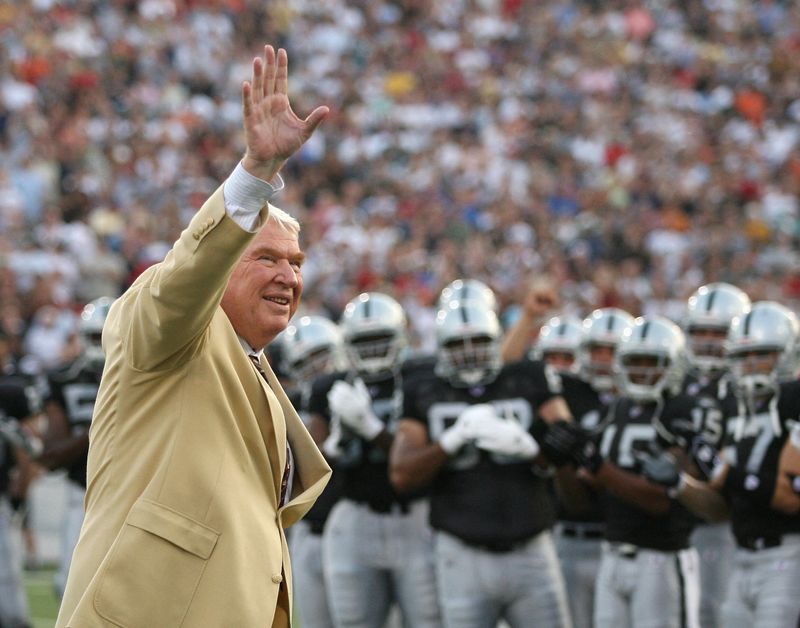 Allentown Cops Jump into Lehigh River to Save Man in Distress

Allentown Cops Jump into Lehigh River to Save Man in Distress