The White House decided to keep Thomas-Greenfield in New York after President Joe Biden spoke with Russian President Vladimir Putin on Saturday, a U.S. official told Reuters on Sunday. Biden told Putin the West would respond decisively to any invasion.

“Ambassador Thomas-Greenfield will remain in New York to engage in diplomacy related to Russia’s escalating military build-up on Ukraine’s borders,” said a spokesperson for the U.S. mission to the United Nations.

The U.N. Security Council is due to gather on Thursday for a regularly scheduled meeting on the Minsk agreements, endorsed by the council in 2015 and designed to end a separatist war by Russian-speakers in eastern Ukraine.

But diplomats expect Western countries to raise concerns over Russia’s current military escalation at that meeting. It is also likely to be a topic of discussion when Security Council envoys meet with U.N. Secretary-General Antonio Guterres on Monday for their monthly lunch, diplomats said.

The United States said on Friday that the Russian military, which has more than 100,000 troops massed near Ukraine, could invade at any moment. Russia denies having any such plans and says its actions are a response to aggression by NATO countries.

Tensions between Russia and the United States spilled into the Security Council two weeks ago at a public meeting requested by Washington to discuss Moscow’s troop build-up near Ukraine. Russia made a failed bid to stop the discussion.

“Russia’s aggression toward Ukraine is a threat to global peace and security and to every U.N. member state,” the U.S. mission to the United Nations spokesperson said. “We hope that Russia chooses dialogue instead of conflict, but we’re ready for any scenario.”


The 15-member U.N. Security Council is charged with maintaining international peace and security. But the council won’t be able to take any action beyond talking about the Ukraine crisis as Russia is one of the body’s five veto powers, along with the United States, China, France and Britain.

The council has already met dozens of times over the crisis in Ukraine since Russia annexed Crimea in 2014.

China supported Russia in trying to stop the Jan. 31 council meeting called by the United States. Thomas-Greenfield said last week she hopes China will urge Russia to “do the right thing” on Ukraine, prompting her Chinese counterpart to respond with a call for diplomacy and an end to “hyping up the tension.”

Thomas-Greenfield – a member of Biden’s cabinet – had been due to travel to Liberia on Sunday for bicentennial celebrations in Monrovia marking the arrival of free Black men, women, and children from the United States on Providence Island.

She was set to return to New York by Thursday for the Security Council’s meeting on the Minsk agreements. 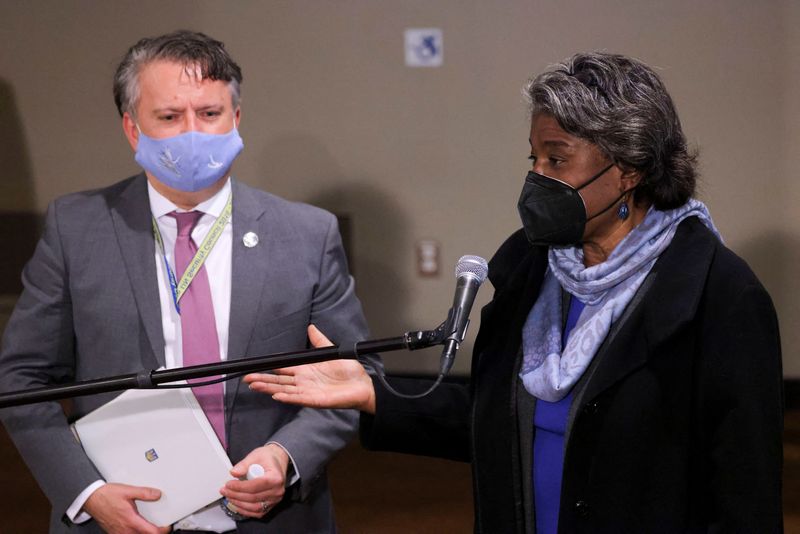