By Sruthi Shankar and Shashank Nayar

-European stocks pulled back some of their recent losses on Tuesday following reports that some Russian troops near Ukraine were returning to their bases, while some positive corporate updates also boosted sentiment.

The pan-European STOXX 600 index ended 1.4% higher after falling for three consecutive sessions, winding up on Monday at its lowest since Jan. 24.

Stocks rallied after Russia said some of its troops were returning to base after exercises near Ukraine, a move that could ease tensions between Moscow and the West. But NATO said it had yet to see any evidence of a de-escalation. [nL8N2UQ28Q]

“The gains reflect some modest easing of tensions at the Ukrainian border, with Russian troops apparently returning to base for the time being,” said Danni Hewson, financial analyst at AJ Bell.

Investors were rattled by fears of a Russian invasion of Ukraine, driving up volatility gauges and equities sharply lower on Monday. A common gauge of volatility in euro zone equities fell to 27.1 points after hitting a three-week high of 33.95.

German Chancellor Olaf Scholz said after meeting President Vladimir Putin in the Kremlin on Tuesday that the withdrawal of some Russian troops was a good sign.

“There is an immediate risk in the next few days depending on how all this evolves,” said Punit Patel, senior equity fund manager at London and Capital.

“Geopolitical issues, certainly one that includes Russia, will provide headline risk for markets just given how sensitive the whole situation is.”

Healthcare stocks led gains, with AstraZeneca the top boost to the index, jumping 5.8% after positive updates from a late-stage trial for a prostate cancer treatment.

UK-listed miner Glencore gained 1.2% on the selling of its stake in Russia’s Russneft.

French IT consultancy Capgemini slipped -3.3% after warning that its operating margin this year will likely be held back by inflationary pressures.

Among economic data, flash readings for euro zone’s fourth quarter GDP showed a 4.6% gain over the previous year, which was in line with Reuters estimates.

(Reporting by Sruthi Shankar in Bengaluru; Editing by Sherry Jacob-Phillips and Mark Heinrich) 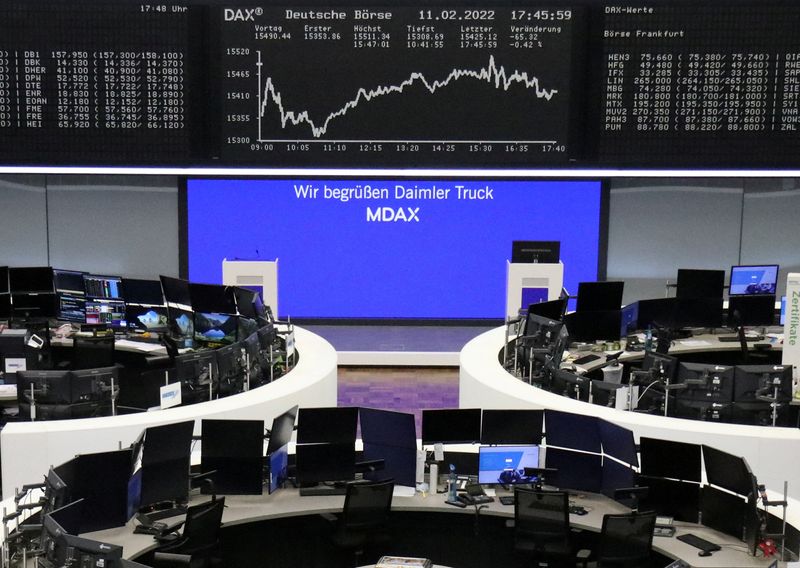