BENGALURU/JOHANNESBURG – Currencies are in for a bumpy ride with already heightened volatility expected to increase over the next three months in the wake of Russia’s invasion of Ukraine, according to a Reuters poll of analysts who forecast more pain for the battered rouble.

Volatility spiked on Wednesday to levels not seen since the start of the COVID-19 pandemic, according to Deutsche Bank.

That trend is expected to continue in the near term, with over 90% of respondents to an additional question in the Feb. 28-March 3 poll of currency strategists expecting volatility to either increase or increase significantly in the coming three months.

“It will be a higher volatility period just because the issues under discussion haven’t been under discussion in a generation and in some places in a lifetime,” said Steve Englander, head of G10 FX strategy at Standard Chartered.

Since Russia invaded Ukraine on Feb. 24, money has been siphoned away from riskier assets into safer havens, including the dollar, the Japanese yen and the Swiss franc, as well as currencies linked to commodity markets.

While the yen and franc were expected to be in demand in the short term they were forecast to weaken marginally against the greenback over the 12-month horizon as neither currency carries an interest rate edge.

The U.S. Federal Reserve is set to begin raising rates at its meeting this month from near-zero, delivering at least 125 basis points of tightening by year-end, according to a separate Reuters poll. [ECILT/US]

“The traditional safe havens…are doing OK but not brilliant when under tensions, and underperforming badly when tensions ease because, in a way, they have nothing to offer. They don’t have any rates,” said Englander.

Median forecasts of over 60 respondents showed little change in analysts’ expectations compared with the February poll, suggesting many forecasters have not yet worked out the wider FX market implications of armed conflict in Europe.

“We have a very, very wide range of geopolitical outcomes here, which the market is not pricing for correctly,” said Michael Every, global strategist at Rabobank.

“The risks in play here in the background transcend anything to do with where the euro/dollar is trading.”

So far, analysts expect the euro, which hit a 21-month low on Wednesday, to recoup its 2.5% losses for the year and gain more than 1.0% over the next 12 months.

The yen and the franc are also forecast to trade slightly lower in a year, and commodity currencies to outshine them.

The Aussie dollar and Kiwi dollar are expected to gain over 2.3% and 6.0%, respectively, and the Canadian dollar over 2.5%.

The Russian rouble hit a record low on Thursday, shedding over a third of its value this year, as stinging Western sanctions pummeled Russia’s financial system.


Russia’s neighbour Turkey, where President Tayyip Erdogan has been urging the central bank to cut interest rates to fight inflation now running at 54%, has been battered by a currency crisis that saw the lira lose nearly half its value last year.

The lira was forecast to plunge another 20% in the next 12 months.

(For other stories from the March Reuters foreign exchange poll:) 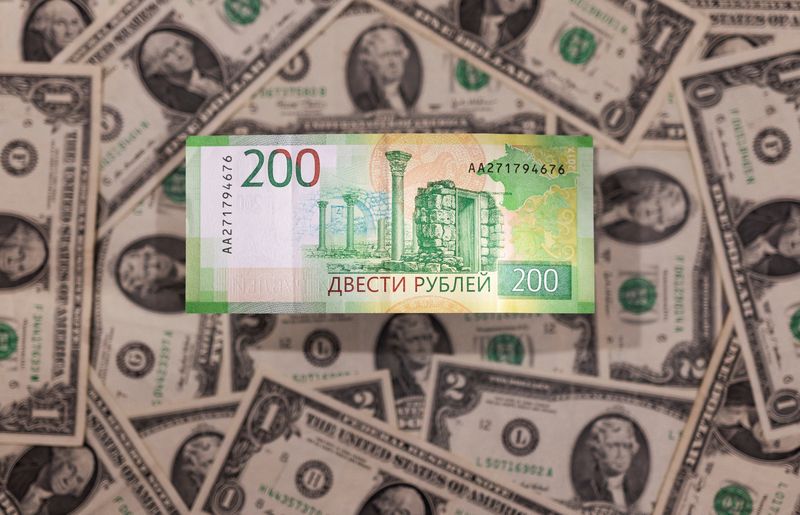