Ketanji Brown Jackson, President Joe Biden’s nominee to become the first Black woman to serve on the U.S. Supreme Court, presided as a federal trial court judge in all three of these cases involving claims of racial discrimination. She ruled against all three plaintiffs.

During Senate Judiciary Committee confirmation hearings last year after Biden nominated her to a federal appellate court, Jackson faced Republican questions about whether race plays a role in how she does her job as a judge. She said it does not, though the issue could arise again during her four-day confirmation hearing before the committee beginning on Monday.

Reuters reviewed 25 cases in which Jackson issued substantive rulings as a U.S. district court judge in Washington from 2013 to 2021 involving plaintiffs who made claims of racial discrimination, most involving the workplace. She ruled in favor of plaintiffs in only three of the cases.

“Plaintiffs in employment discrimination cases lose a lot, so this strikes me as consistent with the pattern I would expect because they are notoriously hard to win,” said employment law expert Kim Forde-Mazrui, director of the University of Virginia School of Law’s Center for the Study of Race and Law.

In two of the three cases that did not involve Black plaintiffs, Jackson ruled against a white man and an Asian man claiming workplace racial discrimination.

In the third case, she rejected a challenge by a company that bids on military contracts to the constitutionality of a U.S. law that gives preference for awarding government contracts to small businesses owned by “socially disadvantaged individuals,” a category that includes racial minorities.

In one case, Jackson declined to certify racial discrimination claims brought by two Black workers against defense contractor Lockheed Martin Corp as a class action that would have involved potentially more than 5,000 employees. Jackson also rejected a $22 million settlement fund that the workers had negotiated with Lockheed, saying it was unclear if the amount was fair to workers who were not involved in the litigation. The case was eventually settled in 2020.

“If people are afraid she is going to be siding with Black plaintiffs because of her race, there are plenty of cases in her record that show she is not unwilling to side against a Black plaintiff if the facts and the law require it,” said Aron Zavaro, an employment lawyer in the Washington area who has represented plaintiffs in cases against government agencies.

Zavaro said Jackson’s rulings show that she followed Supreme Court precedent in how to analyze cases brought under the federal law that prohibits employment discrimination, a claim that can be difficult to prove because plaintiffs rarely have direct evidence of bias.

Under the U.S. Constitution, the Senate is given the job of confirming a president’s judicial nominees. A simple majority vote would be needed for Jackson’s confirmation to a lifetime post on America’s top judicial body, replacing the retiring liberal Justice Stephen Breyer.

The Senate is divided 50-50 between the two parties, with Biden’s fellow Democrats controlling it because Vice President Kamala Harris can cast a tie-breaking vote.

Biden’s nomination of Jackson fulfilled his 2020 campaign promise to name the nation’s first Black woman justice – a “long overdue” milestone, he said – though some Republicans accused him of discriminating against men and non-Black women by refusing to consider any of them for the job.

During an April 2021 confirmation hearing after Biden nominated her to the U.S. Court of Appeals for the District of Columbia Circuit, some Republican senators confronted Jackson on race including whether she considers the U.S. justice system racist.

“I don’t think race plays a role in the kind of judge I have been and would be,” Jackson replied, adding that race “would be inappropriate to inject” into her consideration of a case.

(Reporting by Andrew Chung and Lawrence Hurley; Editing by Will Dunham and Scott Malone) 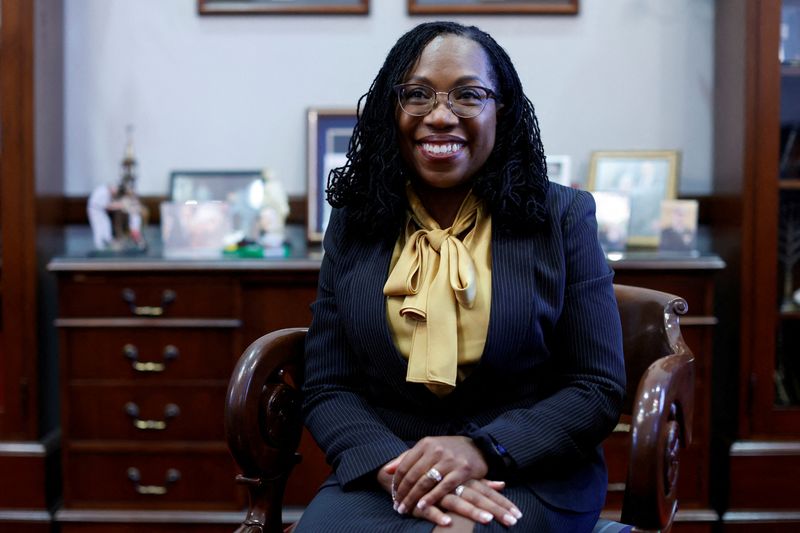 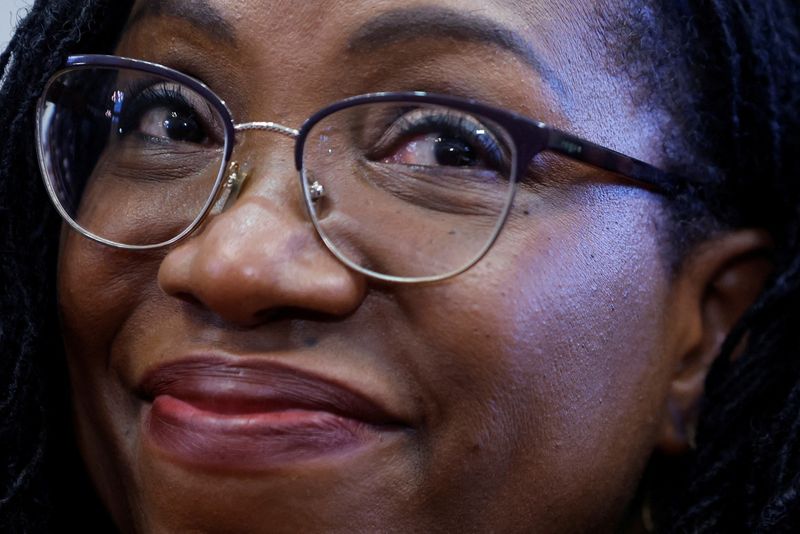