TOKYO – The Bank of Japan (BOJ) should revise its yield curve control (YCC) policy or scrap it if the benchmark Japanese government bond (JGB) yield keeps rising to the upper limit of the central bank’s range, one third of economists surveyed by Reuters said.

The BOJ in recent weeks has defended its ultra-low interest rate policy under which it pledges to keep 10-year yields around 0%, in contrast with the U.S. Federal Reserve which is pushing aggressively for sizeable rate hikes.

Under YCC, the BOJ sets an implicit band around its 0% target and allows long-term rates to move up and down by 0.25%.

But with moves staying stubbornly near the upper end of that range, at a time when the yen has plunged to two-decade lows, the central bank has stepped in to buy debt repeatedly from last month to defend the 10-year yield target.

Uncertainty in the global economy spurred by soaring energy and raw material prices largely due to Russia’s war in Ukraine as well as supply chain disruptions have caused inflation to surge in the United States and elsewhere, prompting some central banks to hike rates already.

“The United States has become aggressive in monetary tightening, while Japan is sticking to its easy policy,” said Yusuke Shimoda, senior economist at Japan Research Institute.

“The Bank of Japan has to take some kind of action as there’s no doubt upward pressure on interest rates will get stronger due to that gap in monetary policy.”

Five economists said the BOJ should raise the upper range of the YCC band if the 10-year JGB yield keeps rising to it.

“One possibility is to widen the allowable range to 0.50% from the current 0.25%,” Shimoda added.

Four others in the poll said the BOJ should target yields with a shorter maturity than the 10-year bond, while one economist said it should give up its 0% target and YCC entirely.

At its two-day rate review ending next Thursday the central bank is widely expected to keep its short-term interest rates at -0.1% and hold onto its long-term rate target.

The BOJ last widened the yield band under YCC in March 2021, from a prior range of 0.20% around its zero percent target.

“It’s necessary for the BOJ to explain whether the fluctuation range is still appropriate,” said Mari Iwashita, chief market economist at Daiwa Securities.

Eighteen of 28 economists surveyed said the BOJ should keep offering to buy unlimited amounts of JGBs if the 10-year yield keeps rising to the bank’s upper range.

Japan’s economy was expected to expand an annualised 5.1% in the current quarter, slightly above March’s prediction of 4.9%, according to the median forecast of more than 40 analysts in the April 11-21 poll.

The world’s third-largest economy is projected to grow 2.5% in the current fiscal year that began this month, and 1.6% in fiscal 2023 after an expected 2.3% expansion in fiscal 2021.

Core consumer prices, which exclude volatile fresh food prices, will rise 1.7% this fiscal year and 0.8% in fiscal 2023, after a small 0.1% in the previous fiscal year, the poll showed. 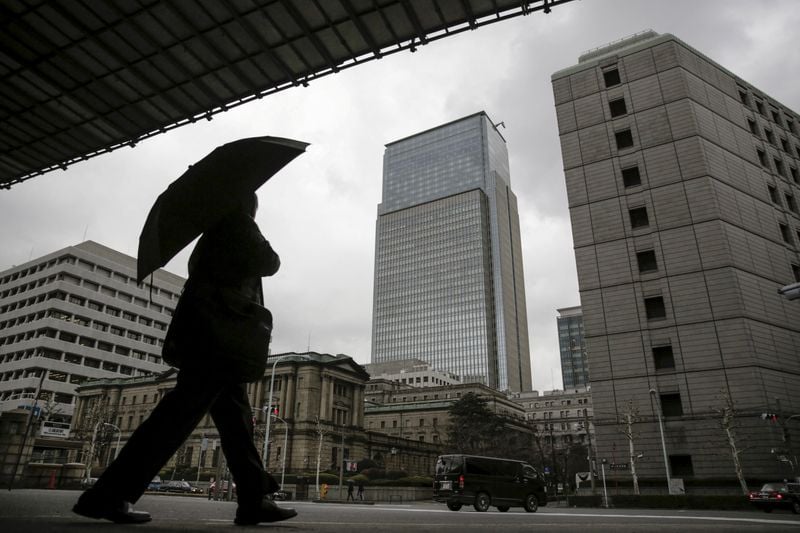