By Joey Roulette and David Shepardson

WASHINGTON (Reuters) – U.S. Senator Bernie Sanders asked lawmakers to delete language from a bill that would fund development of a new lunar lander for NASA, a move seen as part of the senator’s effort to nix federal funds that could go to companies owned by billionaire Jeff Bezos.

The provision is part of a broad bill that would provide $52 billion in semiconductor manufacturing subsidies and authorize additional funds to boost U.S. competitiveness and scientific research.

The bill would authorize $10 billion through 2025 for a lunar lander program that Blue Origin, the space company owned by Bezos, has sought to compete alongside rival companies.

Sanders, long critical of Bezos for what the senator has called “illegal anti-union activity” at Amazon.com Inc, the technology and commerce giant founded and chaired by Bezos, has criticized the NASA funds as a “$10 billion bailout to Jeff Bezos to fuel his space hobby.” A Blue Origin spokesman declined to comment.

The funds for the NASA program would help fund an existing lander contract won by Elon Musk’s SpaceX and could potentially go to additional companies other than Blue Origin, such as Northrop Grumman or Lockheed Martin Corp – top defense contractors that had partnered on Blue Origin’s moon lander proposal in past programs but are now considering lodging their own, individual proposals for the new NASA program.

Sanders’ motion to lawmakers negotiating parts of the bill, which was seen by Reuters, may receive a vote among senators in the coming weeks. The procedural step is needed before the House of Representatives and Senate can begin formal negotiations.

A Senate Democratic aide said Democrats offered on Wednesday to hold 28 total votes on motions, including 19 from Republicans.

Commerce Secretary Gina Raimondo said at a Senate Commerce hearing Wednesday that it was urgent Congress pass funding for semiconductors.


“I don’t think it’s an exaggeration to say this is a national emergency, it is threatening our national security, as well as our economic security,” Raimondo said.

NASA in 2021 picked a lander proposal from SpaceX over Blue Origin’s lander proposal to build a spacecraft capable of putting a crew of astronauts on the moon’s surface by roughly 2025. The SpaceX award sparked unsuccessful protests from Bezos’ space company.

Senator Maria Cantwell has led calls for NASA to pick a second lunar lander to stimulate commercial competition and ensure the agency has a backup option in case SpaceX’s lander, Starship, falls short.

Sanders on Tuesday called for President Joe Biden to issue an executive order to cut off federal contracts to Amazon until the e-commerce company stops what he described as “illegal anti-union activity.” 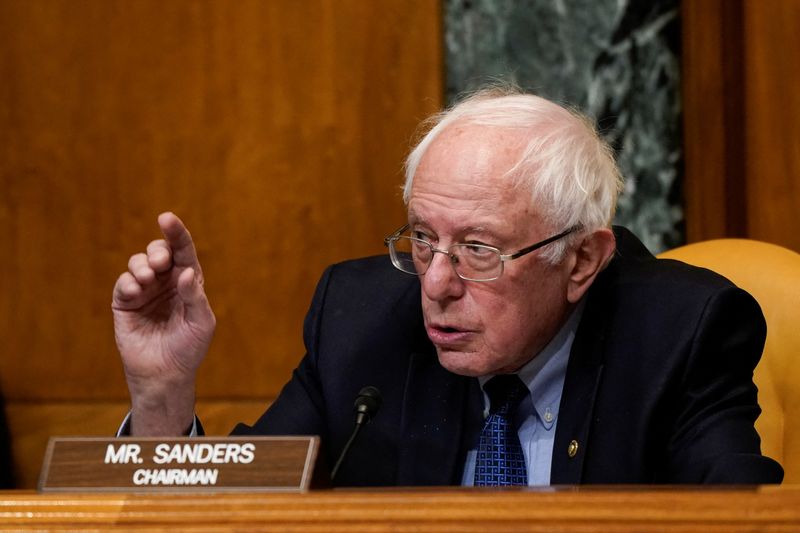 U.S. to allocate 296,000 vaccine doses for monkeypox to states in coming weeks

U.S. to allocate 296,000 vaccine doses for monkeypox to states in coming weeks