By Khanh Vu and Elaine Lies

HANOI (Reuters) – Japan and Vietnam agreed on Sunday to boost economic and security ties while calling for an end to the war in Ukraine, Japanese Prime Minister Fumio Kishida said during a Southeast Asia tour.

“We’ll strengthen bilateral ties in order to put the economies of both nations back on a clear recovery path in the wake of the coronavirus,” Kishida told reporters in Hanoi after meeting with his counterpart, Pham Minh Chinh.

Kishida and Chinh said they discussed regional responses to Russia’s invasion of Ukraine and to disputes in the South China Sea, where China, the Philippines, Vietnam, Taiwan, Malaysia and Brunei have competing territorial claims.

“We agreed that any change in the status quo by force cannot be recognised,” Kishida said, referring to the Ukraine crisis. “We agreed on the need for the war to end immediately.”

Kishida said he and Chinh “also agreed to strongly oppose any attempts to change the status quo by force in the South China Sea.”

Chinh announced Vietnam’s donation of $500,000 for humanitarian aid to Ukraine via international organisations.

He said Vietnam expects to begin exporting longan to Japan in September, followed by other produce such as grapefruit, avocado and rambutan, while opening its market for Japanese grapes.

Kishida said Japan will support an energy transition toward sources such as biomass, hydrogen and ammonia in Vietnam, which has committed to becoming carbon neutral by 2050.

(Reporting by Khanh Vu in Hanoi and Elaine Lies in Tokyo; Additional reporting by Junko Fujita; Editing by William Mallard) 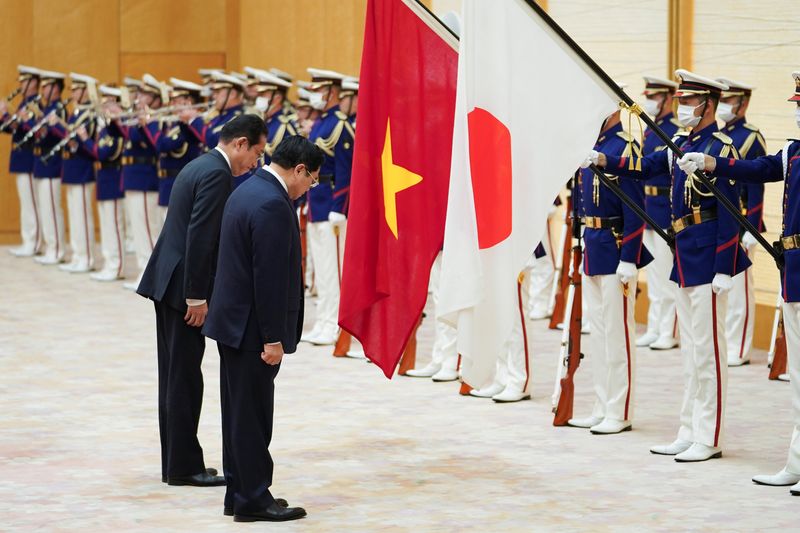