RYBNITSA, Transdniestria, Moldova -“Of course we’re afraid,” said pensioner Marina Martalog, walking across a long bridge over the Dniestr River to her home in Transdniestria, a pro-Russian breakaway sliver of Moldova along the border with Ukraine. “Who isn’t afraid of war?”

Alongside her, the bridge was choked with cars and trucks, backed up across the entire 400 metre span because of extra checks from Transdniestria’s separatist authorities, who have announced a state of emergency after what they say was a week of terrorist attacks aimed at drawing the region into the Ukraine war next door.

Reported shootings and explosions have turned the territory of Transdniestria – long an anomaly on the post-Soviet map rarely noticed by the outside world – into the subject of international speculation that the Ukraine war could spill over frontiers.

Transdniestria’s separatist authorities blame Ukraine for attacking their territory to provoke war with Russian troops based in the enclave. Since last week, they say attackers shot up their security agency headquarters, blew up two radio masts, and sent a number of drones across the frontier from Ukraine armed with explosives.

“The situation is alarming because Transdniestria has suffered terrorist attacks,” Vitaly Ignatiev, foreign minister of the separatist administration, told Reuters this week in an interview by video link from his office in Tiraspol, the region’s capital.

“Honestly, I don’t see any reason why the Ukrainian side would use such methods against Transdniestria. Transdniestria does not threaten Ukraine,” he said. “I have said several times we are an absolutely peaceful state.”

Ukrainian government officials have repeatedly denied any blame for the incidents in Transdniestria, saying they believed Russia was staging false-flag attacks to provoke war. Moscow, too, has denied blame, while saying it was concerned that Kyiv was trying to escalate.

Reuters has been unable to independently verify who is behind the attacks.

For Martalog and some other residents of Rybnitsa, a factory town on the left bank of a wide and gentle stretch of the Dniestr River, there was only an ominous sense of bewilderment. Around half a dozen residents interviewed by Reuters said they did not know what to believe.

“We leave the apartment, come home. Everyone sees the same thing: what they show on the television,” said Martalog, returning to Rybnitsa after a visit with family on the Moldovan-held side. “Who knows?”

The separatists who control the area say they have cancelled all foreign journalist accreditations under the state of emergency they imposed last week in the wake of the attacks.

Reuters was granted permission to enter the region, provided no interviews were conducted or pictures taken during the visit. For this story, a reporter walked through Rybnitsa, observing the town, before exiting separatist territory and speaking with some of the many residents crossing the bridge.

Apart from the extra traffic on the bridge itself, there was little sign of an emergency. There were no checks at all on the other, Moldovan-held side of the bridge, where a single policeman sat in a booth.

“You see? It’s all peaceful,” said Andrei Duca, a Rybnitsa resident walking with his pre-school son on his shoulders across the bridge for a day-trip to the smaller, tidier town of Rezina controlled by Moldovan authorities on the right bank.

“If the situation were serious, they’d have shut the border altogether. There would be speedboats zooming up and down the river. You see? It’s all quiet,” he said.

A small contingent of about 1,200 Russian soldiers has remained in Transdniestria since the breakup of the Soviet Union, guarding a huge weapons dump at the town of Cobasna, a short drive from Rybnitsa on the Ukrainian frontier.

Last month, a Russian general said one of Moscow’s war aims was to seize a swathe of southern Ukrainian territory to link up with Transdniestria. The remarks drew a formal protest from the Moldovan government.

Inside separatist-held Rybnitsa, a fruit and veg market of covered stalls was humming, with fresh seasonal strawberries and mounds of fragrant tomatoes on sale. Shelves were full at a big, busy supermarket nearby.

It was a sunny, clear day. Upriver, faint smoke could be seen above a huge cement factory, one of the many heavy industrial enterprises that have thrived in Transdniestria thanks to heavily subsidised Russian gas. Kayakers were paddling in the river by the quay on the separatist side.

At a bus stop on the Moldovan side, Diana Blanari sat with a baby on her lap and a young daughter by her side.

“Of course you feel it, the people over there in Rybnitsa, they are afraid to suddenly be dragged into it. What with – where all the weapons are in Cobasna,” she said.

But she smiled and so did her daughter.

“I think it will be alright. We don’t believe in rumours,” she said. 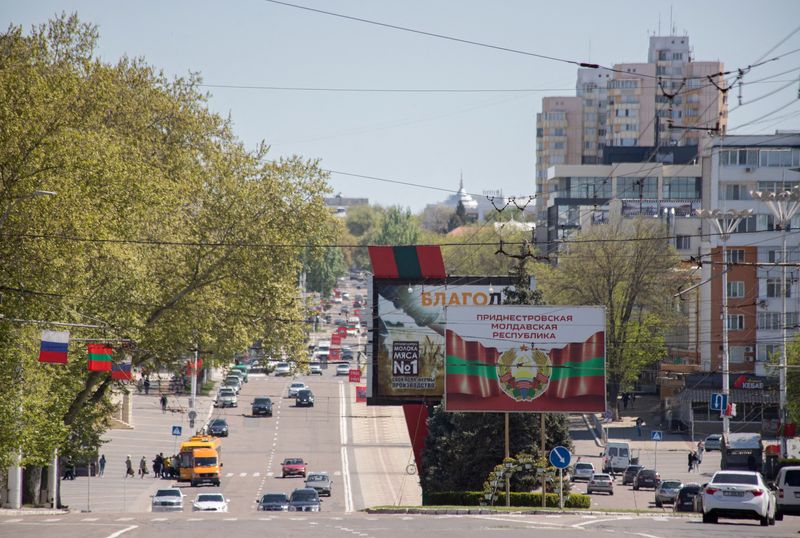 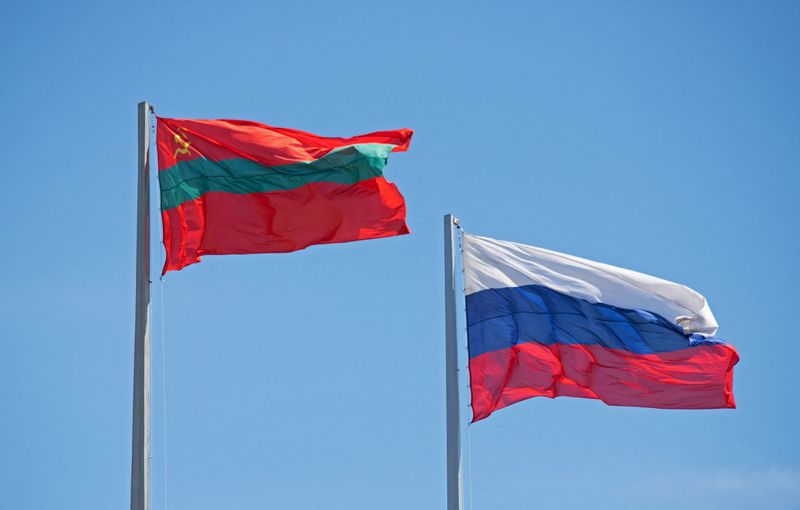