By Ezgi Erkoyun and Nevzat Devranoglu

ISTANBUL – Turkey’s annual inflation rate jumped to a 24-year high of 73.5% in May, fuelled by the war in Ukraine, rising energy prices and a tumbling lira — though the figure was slightly lower than economists had feared.

Inflation has surged since last autumn, when the lira slumped after the central bank launched a 500 basis-point easing cycle sought by President Tayyip Erdogan.

The latest figure surpassed the 73.2% touched in 2002 and is the highest since October 1998, when annual inflation was 76.6% and Turkey was battling to end a decade of chronically high inflation. Nevertheless, the consensus forecast was for annual inflation to rise to 76.55%.

Transport and food costs have soared by 108% and 92% respectively over the last year, reflecting a deepening economic crisis for Turks struggling to afford basic goods. The domestic producer price index climbed 8.76% month-on-month in May for an annual rise of 132.16%.

Nebati has previously said inflation will fall to single digits in time for next year’s election under an economic programme that prioritises low interest rates, high production and exports, and a current account surplus.

However the trade deficit widened 157% year-on-year in May to $10.7 billion, mainly due to energy imports. The central bank forecasts single digit inflation by end-2024.

Economists see inflation remaining high for the rest of 2022 and ending the year at 63%, based on a median estimate, up from 52% in last month’s poll.

“It is not possible for Turkey, which has gone beyond the rules of the economic doctrine, to solve its key problem of high inflation with its current policies,” said economist Arda Tunca, a columnist at PolitikYol.

In a surprise, TUIK said it stopped publishing average prices of individual items in the inflation basket, which had been listed in a monthly table since 2003.

The institute said it will publish an index table showing changes in item groups, as part of Eurostat compliance.

“Establishing TUIK’s structure independent from government is as important as the central bank’s independence,” said Mahfi Egilmez, another Turkey-based economist said on Twitter. “Accurate and reliable data production is the first and foremost prerequisite to implementing correct policies.” 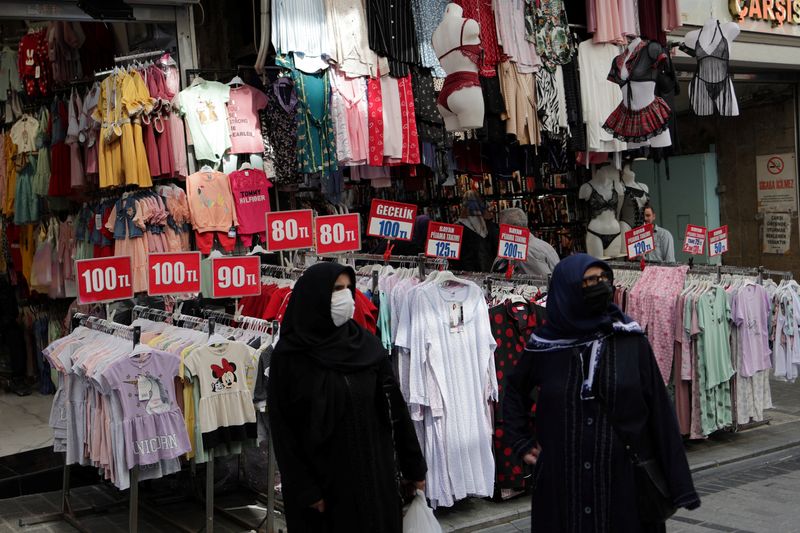